P6/7 went to the high school on Wednesday 15th March and we had a STEM day with lots of other schools on Islay. STEM stands for  S  science,  T  technology,  E  engineering  and  M  maths. We have been learning 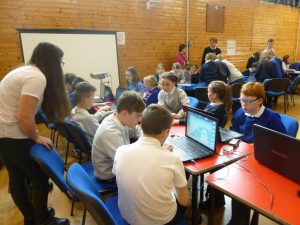 about STEM in class.  At the high school there was a lot of things to do. My favourite thing to do was Kodu. You got to make your own game and then once you are finished you swapped with the other people in your group. We learned to make our own game on Kodu. In my game you had to dodge all of the hills and try to get to the big castle and if you bumped into the castle you would win but you only have 60 seconds to complete the level and if you don’t get to the castle in that amount of time you would lose. When I was making my game I had to program my character to jump so it would go over the hills and before that I had to program him to move. Before I played the game I thought it would be very easy but when I played the game I thought it was very hard so I had to fix the game. To fix the game I had to put down the hills  so people will get to the castle easily.  After I fixed the game I could play the game and so could the other people in my group.     By Rowan