Skip to content
On Monday we were excited to have our first session of hockey with Fraser from Falkirk & Linlithgow Hockey Club. We learned how to hold a hockey  stick and that we use the flat side of the stick to hit the ball. Mrs Donald was very impressed by how well we managed to keep the ball under control when taking part in relay races and corners games.
In numeracy we have continued to work on our 6 and 9 times tables. We were able to discuss lots of different strategies to help us with this. Mrs Doyle showed us a clever trick using our fingers to work out the 9 times table. Ask us to show you!
In our Emotions Works lessons we have been thinking about the green behaviour cog. This cog helps us think about how we display our different emotions using our voice, body and actions. We linked our learning about the first four cogs together to complete an emotions storyboard.
In Science we have been learning about the water cycle with Mrs Begarnie. We showed our understanding of a water drop’s journey by either writing a story or creating a piece of artwork.
Thursday was 80s day which we loved! Everyone’s outfits were amazing and we got a chance to really show them off at the fashion show. We learnt what life was like in the 80s, everything from cars, toys, music, inventions and important events such as Live Aid. We also took part in a Jane Fonda workout in the hall!
As mentioned last week, we have started constructing our 3D Viking longhouses. After careful planning, we are choosing our materials wisely and really enjoying the challenge. Take a sneak peak at some of our work…

Finally, this was our last week with Mrs Donald and Mrs Fleming. We are looking forward to having Mrs Rutter as our new teacher from Monday onwards.

Everyone has been very busy since returning from our half-term holiday. Here is a round-up of some of the things we have been learning about over the last 2 short weeks.

In numeracy we have been continuing to focus on multiplication and have explored how we can use the three times table to help us build the six times table.  Our Number Talks are giving us the opportunity to revise addition strategies. We have been giving change from £1, £2 and £5 and it would be good if we could practise doing this in real life when out and about.
In our Emotions Work lessons we have been exploring the yellow ‘Triggers’ cog and discussing what might make us feel different emotions. We learned that some of us were scared by spiders and others were not. We worked well in small groups to play an emotions board game which helped us think about some triggers for different emotions. 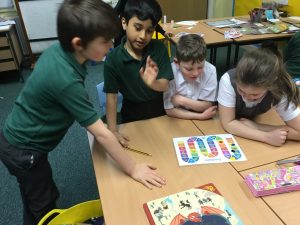 In French, to complete a task labelling parts of the body, we used the new vocabulary that we have been learning through songs and games. We found this quite challenging so we will keep practising the words in different ways in our 5 minutes a day of French. This week our 5 minutes included a French disco!
We are thoroughly enjoying our Viking topic and have been learning about Viking longhouses. Ask us about some of their features and see if we can remember. Watch this space, our very own 3D longhouses will be coming soon!
We got to meet our new teacher Mrs Rutter who will be starting with us on the 2nd of March. She seems lovely!

It has been another busy week in P4a. In Numeracy we have continued our work on multiplication with Mrs Donald and Mrs Doyle. We have been multiplying up to 3 digit numbers by 10 or 100. We are trying hard to remember to think about the digits moving the correct number of steps to the left before we add any zeros to the end of the number. This will help us in  our future learning when we work with decimals.

In Health & Wellbeing we have been continuing to learn about emotions using the Emotion Works cogs. We have already looked at the orange Emotion Words cog to help us extend the range of vocabulary we use to describe feelings and emotions. This week we looked at the red Body Sensations cog and thought about where in the body we might feel different emotions and what these body sensations are. We worked well in small groups to label or illustrate a body template with some body sensations for an emotion e.g. pounding heart when we are scared, butterflies in our tummy when we are worried.

In French we have been learning to name parts of the body. We have enjoyed singing ‘Tête, épaules, genoux et pieds’. We played ‘Jacques a dit’ to practise recognising our new vocabulary.

Tuesday was a very exciting day! Primary 4a and Primary 4b were lucky enough to have two Viking visitors, Cathbad and Sigurd, from Cluaran. They brought lots of interesting Viking artefacts with them and set up their camp in our library. We enjoyed listening to their storytelling about Viking life and heard lots of interesting information which will help us in our learning about the Vikings.

After break we split into groups to rotate around different activities. Cathbad and Sigurd let us have a closer look at the items they had brought and told us more about life as a Viking. We worked in pairs to make clay playing pieces for a board game called the Game of Sea Kings. We then challenged our partner to a game. Mrs Donald was really impressed by how quickly we picked up the rules. With Mrs Burton, we looked at and drew some of the items that were commonly buried with Vikings when they died. We learned that the types of items found at a burial site can give us information about a Viking’s status.

In the afternoon we went outside to learn more about how Vikings built their settlements and travelled to other lands by playing ‘Settlers to Sea Kings’. We worked in teams to collect everything we needed to build our village. We had to remember to protect our village at all times, even when some people were away travelling over land or sea to collect items. Some teams discovered that unprotected villages are easily visited by Viking raiders and they lost some of the resources they had worked hard to gather!

Our day ended with the opportunity to have a closer look at some Viking shields and swords and a musical instrument called a lyre. Some of us even tried on some heavy chainmail armour. What an amazing, action-packed Viking day!!