In the past, the term ‘dysgraphia’ was used to refer to both motor coordination difficulties affecting writing, as well as persistent difficulty expressing thoughts in writing due to weaknesses in literacy and/or language conventions (such as spelling, grammar and punctuation).  To avoid any confusion between the two, a distinction has more recently been made with a specific learning disorder in written expression (Dysgraphia) referring to (a) the language-based difficulties involved in constructing meaningful and effectively structured expressive writing and (b) ongoing weaknesses in spelling and punctuation that affect a student’s capacity to express their ideas with clarity.  Persistent handwriting difficulties associated with an impairment in motor coordination are now commonly understood to be a particular aspect of Developmental Coordination Disorder (previously known as Dyspraxia). Students with Dysgraphia have extreme difficulty getting their thoughts both in order and then down on paper. Many students with Dysgraphia also have Dyslexia.

Please see the video below for further information: 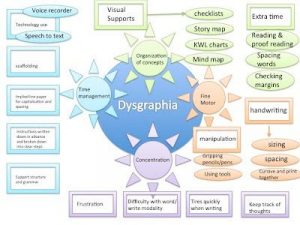 Dysgraphia can appear as difficulties with spelling  and/or trouble putting thoughts on paper. Dysgraphia is a neurological disorder that generally appears when children are first learning to write. Experts are not sure what causes it, but early treatment can help prevent or reduce problems.

Dysgraphia is characterised by the person having difficulty converting the sounds of language into written form (phonemes into graphemes), or knowing which alternate spelling to use for each sound. A person with dysgraphia may write their letters in reverse, have trouble recalling how letters are formed, or when to use lower or upper case letters. A person with dysgraphia may also struggle to form written sentences with correct grammar and punctuation, with common problems including ommitting words, words ordered incorrectly, incorrect verb and pronoun usage and word ending errors. People with dysgraphia may speak more easily and fluently than they write.