About 1 in every 100 people in the UK has Autism Spectrum Disorder (ASD). The Autism Toolbox states that “Autism is thought to be more common in boys than girls, however there is a growing consensus that girls are under diagnosed or misdiagnosed. A range of reasons are given for this, including different societal expectations; diagnostic tools being designed around boys; special interests are often gender determined due to social expectations and interests of girls might be perceived as less unusual (e.g. strong interest in lip balms compared with interest in trains).

The quiet, anxious presentation of autism occurs across genders but might be more prevalent in girls and these individuals are more likely to be missed.”

Video from Scottish autism on ASD:

Autism was traditionally described as extreme maleness and many early psychologists, such as Asperger, believed that females could not be autistic.  This led to a belief that typical ASD characteristics were a fondness for categorising, over-confidence and heightened belief in self and ability.  Whilst these are traits for some males, they do not apply to all males and do not typically apply to ASD females. 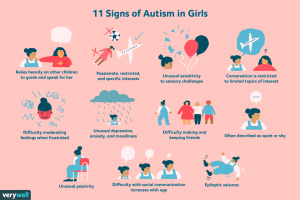 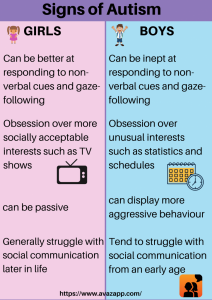 Could your daughter be autistic? The answer may not be as obvious as it would be if you had a son. That’s because signs of autism in girls and women are not the same as those in boys and men.  More importantly, perhaps, they can be easy to miss, particularly in cases of high-functioning autism.

The following video clip is a female psychology student who has ASD describing her experience of growing up with the condition:

Below is a YouTube clip from a American therpaist.  It  explains Autism in girls really well.