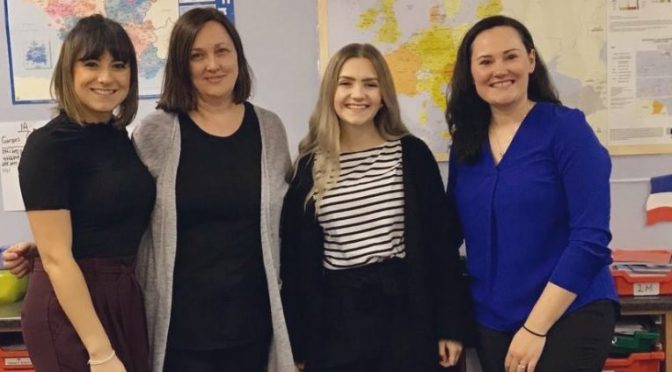 The school’s Modern Languages department bid a fond farewell to German assistant Annegret Landgraf. Ms Graham, Principal teacher of Modern Languages, commented thanked Annegret for all of her hard work with the pupils and her wonderful resources. The school would also like to wish Annegret a safe journey home to Germany.

On Wednesday 4th March a group of S3 Media pupils visited the Sky Academy Studios in Livingston which uses the power of TV and innovation to open young minds and develop their creativity, collaboration and communication. The third years all participated in the ‘FACT: News Reporting’ experience where they were tasked with creating a news report on cyber-bullying. The pupils were split into four groups and each group was responsible for a certain aspect of the news report e.g.: presenting, expert views, interviewing etc. At the end of the workshop pupils had the chance to watch their news report on the big screen which everyone thoroughly enjoyed.

A sneak preview of the 6 minute recording our S3 Media class created on Cyberbullying at @SkyAcademy ⬇️ @braidhurst pic.twitter.com/twP4ZVvUX5

To celebrate World Book Day 2020 on Thursday 5th March the school library hosted a lunch for a select group of readers from S1-S4. Each invited pupil has displayed a real commitment to their personal reading and to supporting their school library. Whilst enjoying chocolate cake and other sweet and savoury treats each of the pupils completed a book review of their favourite title that they have borrowed from the school library and were gifted their free book token. Mrs Scott, the school librarian, also arranged for a couple of pupil-staff interviews – with Emy Brandt from S1 interviewing Miss Galloway, teacher of Art, and Max Watson from S2 speaking with Mr Reynolds, teacher of History – to discover the individual reading journey of each of the staff members.

World Book Day 2020 🌍📚 celebration at lunch with our VIRs (very important readers). These fabulous pupils have shown a dedication to personal reading & their school library. It is a pleasure to support/serve them #schoollibrariesmatter #schoollibrariansmatter #WorldBookDay2020 pic.twitter.com/48dwRl6zew 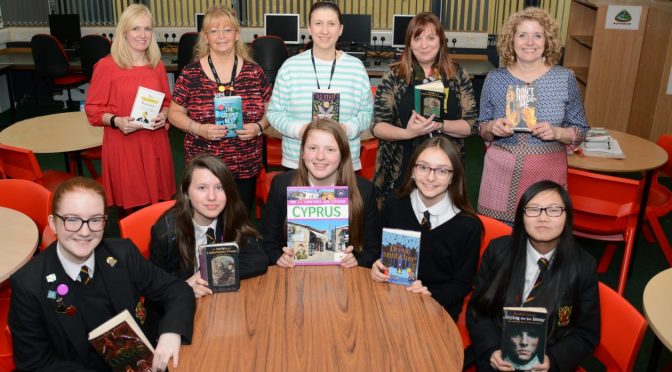 The school library recently celebrated Book Week Scotland 2019 by inviting pupils and staff to a reading lunch in the library on Wednesday 20th November. The lunch was an opportunity for staff and pupils to share their love of personal reading whilst taking some well-deserved rest and relaxation in the middle of a hectic school day. Staff were also invited to recommend a book of their choice to pupils in an attempt to communicate the message that everybody reads, not just the librarian. Staff members recommended a wide variety of fiction and non-fiction titles and were given a poster outlining their choice which they were asked to display in their classroom or office for pupils to see.

The council’s ‘Read to Succeed’ initiative recently organised a fantastic book-gifting event for all S1 pupils. Glowworm Books visited the school on Friday 15th November and all first year pupils were invited to the library to choose their own free book from a list of selected titles, including ‘Diary of a Wimpy Kid’, novels by Jacqueline Wilson and Cathy Macphail. Pupils were impressed by the variety of choice on offer and are now patiently waiting on their book being delivered to school.

The European Day of Languages took place on Thursday 26th September, and pupils took part in various educational, fun activities in the Modern Languages department. S1 pupils enjoyed putting their general knowledge to the test on countries, capital cities and flags. They also competed in an Inter-house competition of ‘Who wants to be a Millionaire’ on European culture with 1A and 1R winning the most points for their house group.

S2 pupils got competitive in the European quiz with questions relating to sports, music, and culture among many other things. 2M were the winning house group in this quiz. Pupils in S3 were given the task of choosing a word or phrase and translating it into as many European languages as possible. Well done to Shannon Crawford who won best poster with the phrase ‘never give up’.

Teachers around the school also celebrated the day wearing badges that said hello in various European languages. We had a Guess the Language competition where pupils had to find teachers wearing the badge and identify the language. Congratulations to Mary Onwubiko in S4 who won the competition! Well done to all pupils for taking part! 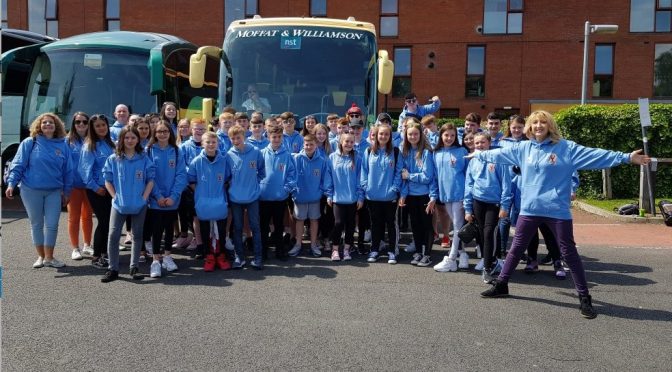 On Saturday 22nd June a group of pupils and staff boarded a coach for the school’s annual European trip which this year headed to Paris.   The first stop was Parc Asterix, a French amusement theme park based on the comic book series of the same title.   Over the next couple of days the group enjoyed the sights of Paris including: the magnificent Eiffel Tower, a fun-filled day at Disneyland Paris, and a tour of the Stade France, which pupils’ and staff thoroughly enjoyed.   Not only was the trip a roaring success, with everyone arriving safely back to Scotland, it also marked the final school trip for our retiring Principal Teacher of Modern Languages, Mrs Magowan.   Bonne retraite Madame Magowan.