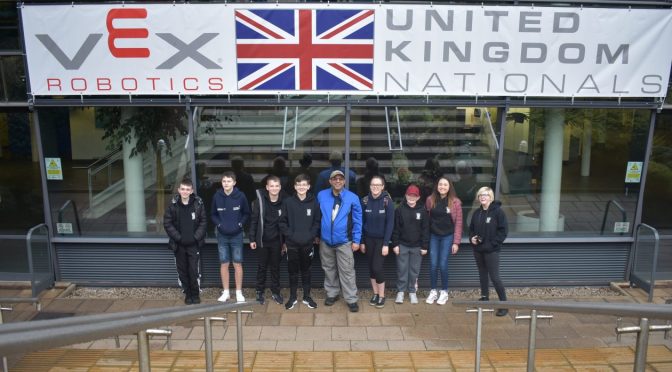 Congratulations to the school’s robotic teams “KOALA-T” and “Anonymous” for reaching the quarter finals in the UK National Vex robotics competition in Telford.

The Vex Robotics Challenge is the world’s largest and fastest-growing robotics competition for high schools, colleges and universities. More than 10,000 teams from 32 countries took part in over 750 tournaments to compete to become the best in the world.

Nearly 60 teams had qualified for the UK finals, which took place at the Telford International Conference Centre. At the competition the North Lanarkshire teams took on the best of the UK with the Braidhurst teams making it through to the quarter finals.

In the VEX Competitions, presented by the Robotics Education & Competition Foundation, teams of students are tasked with designing and building a robot to play against other teams from around the world in a game-based engineering challenge. Classroom STEM concepts are put to the test on the playing field as students learn lifelong skills in teamwork, leadership, communications, and more.

The Braidhurst robotics club has been very well supported by North Lanarkshire and includes pupils ranging from S1 to S4 including three S5 female students who act as STEM ambassadors and have committed to supporting the younger less experienced members. They are true role models and are equipping the developing young minds to meet the autonomous revolution that all countries are facing.