We have a stall this year at the christmas fair for Ardrossan Organics: we will be selling soy candles, bath bombs and pickled produce from the allotments made by the food for life group.

So much has happened with the plot in the past month! It was cleared of all the weeds, new sheeting put down , a shed put up and gravel put down, all done by our eco committee and by volunteers from the allotments: Big thank you to them!

Mrs Chalmers has asked us to speak at the parent council meeting on Monday at 18:30. The S3 pupils who are to attend are Christopher, Lauren and Matthew. Sophie will represent S6. This is to get funding for the plot, and to show them the work we have done so far on it. Hopefully we will be able to apply for Youth Bank grant funding through them for equipment and a polytunnel (Lauren adds we could also buy wellies and jackets). Sophie and S3s will meet up on Monday to discuss this.

Since the Skills Academy has been so busy with the allotment, a lot has got done! The beds are filled, we have peas, potatoes and squash planted and more potatoes to be put in beds. Also thank you to the lady in the plot across from us (I think its plot 19?) who helped fill our raised beds full of soil – toiling work in the hot weather! 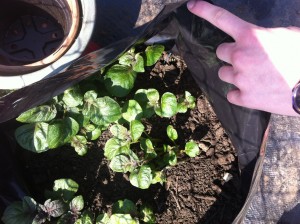 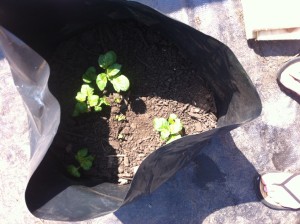 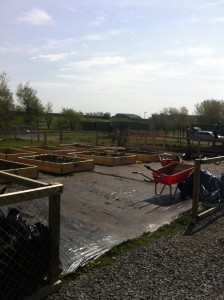 Last week, as part of the Skills Academy programme, pupils explored their local environment including the Stanley Burn and South Beach.
They also helped to plant trees for the Three Towns Growers and made huge progress on the school allotment, filling our raised beds and building a bug hotel.
A big thanks to our sponsor Green Home Systems (Energy/Utility). 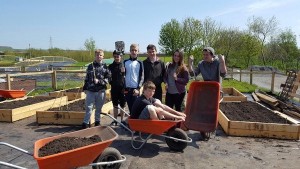 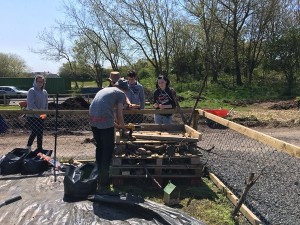 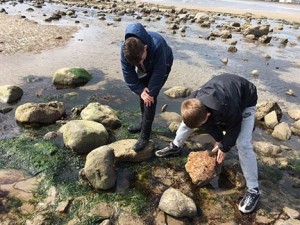 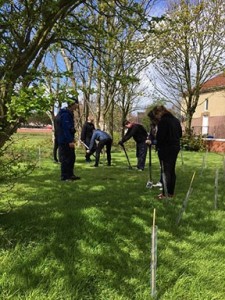 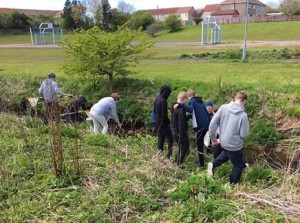 We have been taking part in the UK space agency’s Rocket Science project, where we have two packs of seeds, one which has been to space. The task is to guess… which one? Our seeds have been sowed, and will be planted out in our allotment in the coming months. 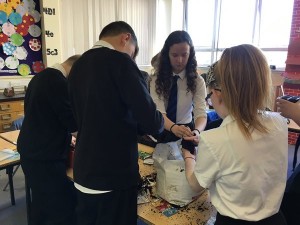 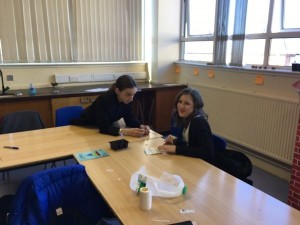 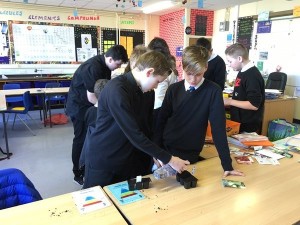 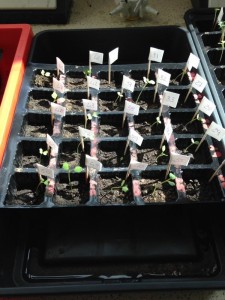 We’ve also been taking part in the ‘Grow your own Potatoes’ scheme, and our tatties are getting along nicely over at the allotment site! 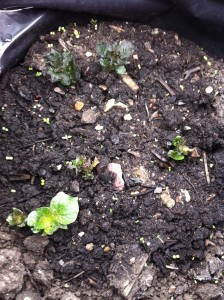 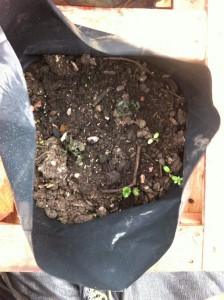 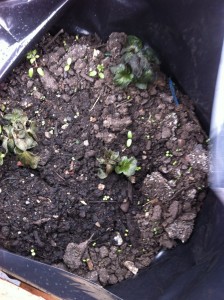 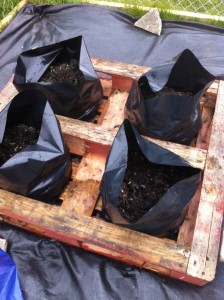 Our raised beds have been built! Thank you to the volunteers at the three towns growers allotment site, who built them for us (one less thing to worry about, with exams coming up). They look great! The skills academy will be over soon to move them into position and fill them with compost. 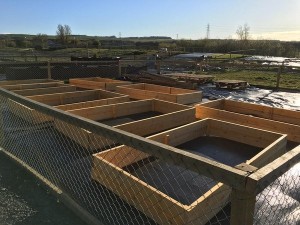 The Three Towns growers held a tree planting day on Saturday to plant all 420 trees given to them by the Woodland Trust. the trees planted included dogrose, hazel, crab apple, blackthorn and elder. We also finished putting the tarpaulin down on our plot, so we’re ready for our raised beds to be built! 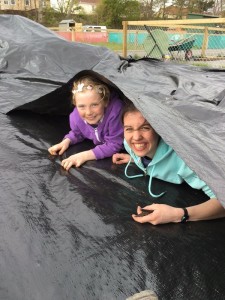 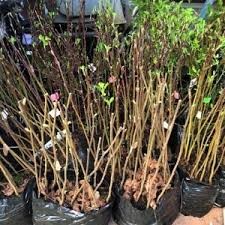 Food Waste:
this is already being separated through the cafeteria. Notable example of good practise was Kilwinning Academy, where food waste is taken to a ‘worm farm’ to be broken down.

Packaging Waste:
Cutlery and plates are to be reintroduced to the cafeteria for main meals. Recycling machine works an this should be highlighted at assemblies. We also discussed having stricter enforcement on those caught littering the canteen with waste-possibly a ban. We need to further discuss this with the head teacher.

Litter:
Most problematic time is after lunch. It was suggested by John that we photograph the playground and canteen after this time and display it at assemblies. Carol suggested highlighting the cost of litter, and the fact you are throwing away money. A litter policy team need to be put together to address this issue, and also give a clear policy on litter which was highlighted by our environmental review.

School Allotment:
This will be discussed more with the food for life group tomorrow, but the catering staff will use any produce from the school allotment, mainly salad crops and root vegetables. They will advertise if it is being used on the day, which will be done in the canteen and on the notice board.

Prefects:
The issue of prefects was also raised at the meeting. We felt that they were sometimes not respected and could be given a higher profile. We also thought that litter picking could be included in the prefect’s duties, but this should be voluntary.

School Grounds:
There is a hazard with thorns that have overgrown, which needs to be sorted. John suggested that a new approach is needed, as currently the area will only be vandalised again. This will be discussed at the next eco committee meeting.

The next meeting will be on May 19th, Period 3 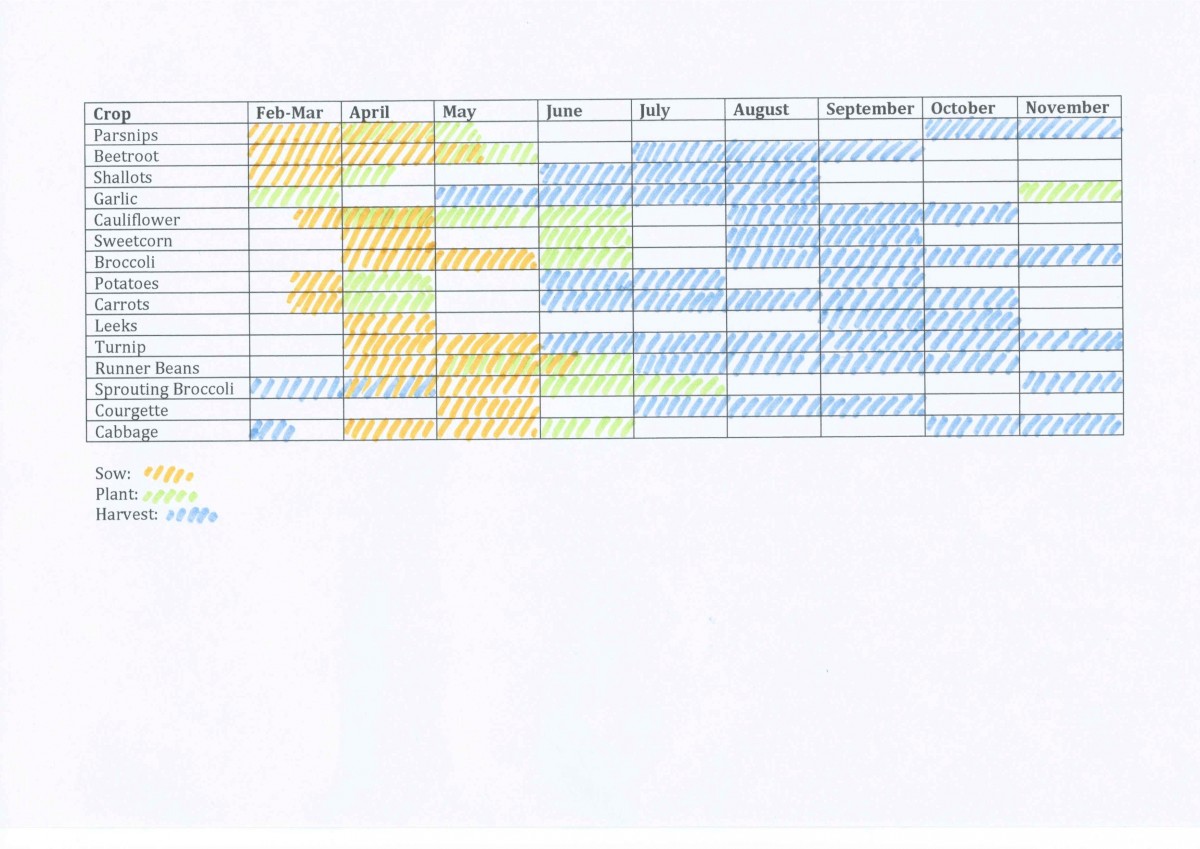