Throughout the social studies elective this year, I have learned many things that will certainly impact upon my teaching in future placements and career. However, for my portfolio reflection, I have decided to specifically focus upon ‘Wolfgang’s Story’ as when I watched this video I felt completely sucked into the learning, along with the rest of the children in the classroom.  I believe this piece highlights the importance of using engaging and exciting teaching techniques within primary school in order to produce imaginative and thoughtful pieces of work.

The video is based upon the teachings of Graham Hicks, a Primary 6 teacher at Eastfield Primary School in Middlesex. His history lessons are particularly unique as Graham transports his pupils back in time through becoming the role of a fictional character, Wolfgang Drenler. In this particular topic, he uses the fictional character within the historical context of World War Two, illustrating a German standpoint. As a student teacher this struck me as World War Two is a very common topic taught in primary schools across the United Kingdom. However, teaching it from the point of view of a German soldier would question and challenge the ideas and beliefs of the children in his class.

Graham uses the power of artefacts by putting on a long, black coat to resemble becoming the fictional character. As soon as the coat is placed on, the story is resumed and the children are instantly gripped to the learning. He also engages the children throughout by using different artefacts and objects each week to help build up the story. This is clear in the video as Wolfgang is sent german bread from his lover Clara, while he is away fighting in Ukraine. Therefore by passing the bread around the classroom, the children were able to draw on all their senses as to what it must have felt like to be Wolfgang Drenler.

Overall, I believe that this video has taught me that for teaching and learning in history to be effective, it must revolve around stimulating activities that engage the children, such as artefacts, drama and storytelling.

In preparation for the battle, the teacher incorporated art, technology and drama into the topic as we had to design our chosen weapon and shield as well dressing up into costumes. I remember feeling part of the learning and that is why it is one of my most memorable experiences from school. The teacher could have taken the easy route by just teaching from the textbook, however he brought it upon himself to make the learning exciting and engaging.

I always remember feeling excited to go to school every day in primary 7 due to the ability of my teacher to captivate the learner and bring the teaching to life. In fact, my primary 7 teacher was such an inspiration to myself and one of the reasons I decided to pursue a career in teaching. My only hope is that I will be able to transform learning into being engaging and exciting like the way my teacher could.

From a young age, I have always engaged myself with sport at school. In the way that many kids dreaded the day p.e. came around, I was quite the opposite! Yesterday, the p.e. workshop with Will reminded me of my inner child and the enjoyment that I used to feel at primary school. Having spent a few days of my work experience teaching primary children in schools how to play rugby, I was already confident in my ability to teach sport to children. However, I learnt yesterday how to make that particular sport, fun and engaging to those children that dread the day p.e. comes around. I believe that it is especially important to make this fun and enjoyable more than ever now that children have been required to spend at least two hours a week staying fit and healthy.

It is quite easy to make a simple warm up fun and enjoyable by giving the children a few simple instructions to remember while running frantically around the gym hall. For example, by signalling one finger the children would know to touch the ground with their left hand while running around. Two fingers would signal touching the ground with your right hand, while three fingers would signal a jump. An easy exercise like this not only gets their heart rate up but tests their mental ability to remember what number corresponds to what exercise. in this way p.e. becomes enjoyable to everyone, not just those who are involved with sporting teams. 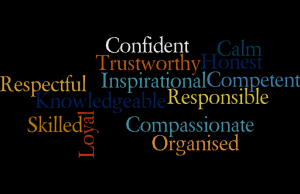 When considering the list of virtues that a great teacher should be associated with, the list is endless. Therefore I will delve into five of the most important attributes I believe every teacher should possess.

From my experience of school life, I always enjoyed classes where the teacher was caring and friendly. School can be a daunting place for children and therefore it is our job as future teachers to make the classroom a friendly and enjoyable place to learn. I want to be a teacher which the children are not scared or frightened to approach when they are struggling or have any problems.

Patience is a great virtue for every teacher to have. It is important to understand that as a teacher you will deal with children from all different walks of life. Therefore some children may not be as fast to grasp certain skills as the rest of the children. However, it is important that as a teacher, the child is not left in the corner to fend for itself and try to keep up. As teachers, it is our responsibility to give extra time and help where it is due so that the child is given the best education that is humanly possible.

Fairness is possibly the greatest attribute every teacher should possess. It is of great importance that every child experiences the same opportunities regardless of their background, race or religion. Every teacher should also make clear the importance of equality among other pupils. Every child is equal. Without this key attribute, the classroom is exposed to many serious problems, bullying undoubtedly one of them.

As a teacher it is vital to be respected by the children. If you do not have the respect of the children then it becomes very difficult to control the classroom. However at the same time, to be respected by the children you have to show them respect back. It is also important to respect other staff members and people who make up the school environment. Respect is the foundation of a relationship, therefore without respect it is near impossible to work together as a whole school community.

As a teacher it is vital to lay down moral standards in the classroom. Children view the teacher as a role model therefore it is important that these morals start from the teacher and are developed by the children throughout their school lives. This is of great importance to becoming a successful teacher.

When on my work experience in January 2014, I spent two days working in Clifton, a Special Needs School in Northern Ireland. Two days is a remarkably short time, however the experience and memories I received will last a lifetime. The whole experience taught me to appreciate everyday life. Many of these children have severe learning difficulties and will never have the freedom of being able to do things for themselves. As a result of this experience I decided to volunteer for Positive Futures, a charitable organisation that integrates sports with children with disabilities. As a result I have met many amazing people and have made even more great memories. Before I left for university, we went on a day trip to Portrush with the boys’ group, consisting of 15 boys ranging from ages 10-18. We went to the amusements and ended the day with a chippy by the sea. Watching them having so much fun, laughing and smiling proved to me that teaching was 100% the vocation for me. I learnt from the whole experience that what makes teaching great, is the feeling you get from helping others. From working in Clifton and for Positive Futures as a volunteer I am deeply interested in specialising in Special Needs. Seeing those children, whose lives are very much limited enjoying themselves and having a good life is very rewarding and very much a profession I would love to be involved in.

One of the greatest problems for teachers in today’s society is undoubtedly social media. Although social media can be a great way of interacting with others and sharing great memories with friends and family, it also has a dark side when it comes to our profession. Today, everyone is using some form of social media, even Primary School children are using the likes of Facebook, Instagram and Snapchat. One  of the worries with this is that they are able to find teachers’ profiles and look through personal photos, information or even contact them through social media. It is therefore vital that teachers’ remove any inappropriate information from their profile, change their account to private or even create a new profile when it comes to their personal lives.

I feel that therefore being a teacher means your life is very much restricted at times. You can’t be seen “having too much fun” on a night out with friends. You have to read over and change what you write at times, in case it comes across as inappropriate and offends other people. Yes, I understand that when applying to become a Primary School teacher, I was very much made aware of this. I believe that we must be especially careful of what we say on social media and what photos and information are shared. However, I disagree that we should have to live some sort of secret social media life so nobody can find us. I find this completely and utterly ridiculous and believe that something has to be addressed to change this perception.

Growing up as a child and throughout my time at primary school it was obvious that there were cases of gender stereotyping. First of all every teacher in my primary school apart from the Principal was female therefore as a boy I felt very much second best at times. I feel that the teacher cared for the girls much more than they did for the boys. This included hugs at the end of school, holding hands during break and lunch and chats about “girl stuff”. As a result I feel that during class girls received much more attention than boys, which does not add up to this concept of equality that is taught at school. From my own experience I feel that this very much has to change. I believe that there needs to be an increase in male primary school teachers and people need to get out of their heads that primary teaching is a job solely for women. From my volunteering last year at my old Primary School it was still apparent that girls receive much more attention than the boys. For the short time I was there every week the boys were firing questions at me such as “what football team do you support” proving the lack of attention they are receiving in class. I felt that the boys were genuinely excited to see me and as a result indicated further that I wanted to pursue teaching as a vocation. I also feel that at primary school there is an idea that it is acceptable to shout at boys and punish them for doing something wrong. However when you replace the boy with a girl a lighter approach seems to be taken. This is another issue I feel needs to be addressed.