Here’s our second instalment from the Archnetwork Erasmus+ course, Empowering Communities in Cyprus.

Wednesday 16th September 2015. Up early for our road trip we started for the coastal town of Limassol, ready for another day to find out about Cypriot culture. 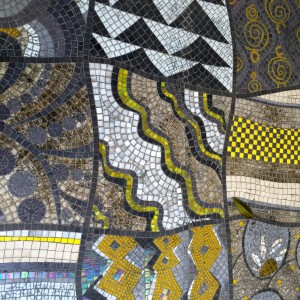 Our first destination was the wonderful Mosaic Collective run by Soula Christou, a truly inspiring woman. The Collective design, create and sell contemporary mosaics across Cyprus and internationally. Their artwork is innovative and work is carried out in both two and three dimensions.
Clients commission the mosaic for domestic settings as well as commercial purposes such as hotels. Soula spoke with passion about her art and with real enthusiasm for life, leaving us all feeling upbeat as we left her studio.

The group had a brief interlude and wandered the narrow streets of old town Lemesos, where we came upon an outlet for the Cyprus Handicraft Service. Part of the Ministry of Energy, Commerce, Industry and Tourism, the Service advocates the preservation of folk art as part of Cypriot cultural heritage and aims to perpetuate folk art as part of Cypriot historical and national identity. What a find! Inside we found a various traditional crafts, including of course Lefkara lace as we had encountered the previous day. However here there was evidence of design innovation, for example one potter had made plates with Lefkara lace imprinted into the surface. The result was simple yet effective, aesthetically pleasing and contemporary. The shop only stocked & sold Cypriot made craft, pricing ranged from affordable to expensive. It’s a shame it is tucked away from the main streets where it would perhaps have more footfall & custom. 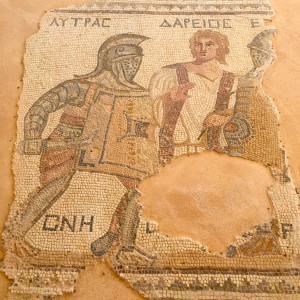 We drove out of Limassol, along by Akrotiri. There is a large Royal Air Force station here, so the sky had plenty of military air traffic. Here was another inescapable dimension to Cypriot life, the British military presence.

The afternoon was spent on site, firstly visiting the ancient archaeological site of Kourion.

We were able to view staggering Roman mosaics in the House of Achilles, which are protected from the elements under huge canopies. We made direct comparisons with the Mosaic Collective and appreciated the longevity of the medium and it’s ability to tell stories. The whole site was huge and included a cliff top auditorium, classical architectural details littered the area – a brilliant place. I got carried away photographing the ionic capitals in particular. As well as all the perfectly carved stone, the exposed structures of under-floor heating were made from stacked ceramic discs and blocks. Coming from a ceramics trained background, I am always drawn to such functional use of clay, not to mention the Roman drainage system & sewers. We completed our itinerary for the day at The Temple of Hylates.