The battle at Culloden was fought on the 16th April 1746 and was the last major battle to be fought on British soil. It is commonly believed to have been a battle between the Scottish and the English, but in … Continue reading →

Another instalment from our education officer’s report on the Archnetwork Erasmus+ course, Empowering Communities in Cyprus.

Friday 18th September 2015. Today started with a trip into the countryside for breakfast. On our way a black snake slid across the road in front of us, apparently a large Whip-Snake, quite a sight. At Loulla’s Farm we found out how Cypriot cheese is made, we had a demonstration of how the goats’ milk is treated, brined and stored to producehalloumi – yum! The process was straightforward with the addition of a pinch of mint and a vacuum pack, done. Outside there was a cheese safe containing what I believe was maturing kefalotyri, another Cypriot delight. We got to visit the goats & even meet a day old kid. Now we were ready to see Lefkosia or Nicosia, on both sides.

earing the capital city of Cyprus I was surprised to see a giant Turkish Cypriot flag painted onto the side of the Kyrenia Mountains – what a statement. Following the conflict of 1974, the Turkish Republic of Northern Cyprus TRNC became a self-declared state, however it is only recognised by Turkey. The political and military dispute in Cyprus remains unresolved and the island continues with life, divided. The Green Line runs 112 miles from east to west across the island, splitting families, property and communities.

We parked by the C16th Venetian city walls and continued on foot through the narrow back streets to our first destination, Helen’s of Kyrenia, a lace shop at 33 Ippokratous. The stock in the shop dated back decades. To my delight amongst the heaps of lace, tatting & embroidery, I found a packet which explained the provenance of the Lefkara lace within; Guarantee Hand Made – Made in Cyprus – Irish Linen – French Thread. Perfect.

Despite the daily impasse, the people of Nicosia go about their business as usual, at least on the surface. Once you start to look around however there are clues on the streets. Still on the south side of the city, we began to notice thought provoking graffiti, not unlike the imagery that adorns the barrier walls of Bethlehem or indeed the peace lines of Belfast. When people live conflict every day for 40+ years, it cannot be ignored. at the time The Scotsman newspaper reported

on the Turkish-Cypriot war & is documented with poignant imagery from 1974. (Image © The Scotsman. Licensor Scran)

Nicosia is a vibrant & sophisticated city, with a buzz in the streets. Trendy shops & coffee houses lined the artists’ quarter. After a little pick-me-up in the form of some Cyprus coffee, μέτριο for me please, we neared the Green Line. Passports at the ready we crossed over to the north side of the city through two sets of border control, Greek & Turkish. It was easy enough the pass through, plenty of tourists and locals alike were going to & fro. Yet, CCTV was evident, uniformed armed guards were on duty & signage warned us that photography was strictly forbidden in this narrow

slice of no-man’s land. The freely available maps of the city tell their own story, both versions simply do not show basic information on their enemy’s side. Visitors must use not one, but two, maps to see the lay of the land and get their bearings in Nicosia.

Once we had crossed the Green Line we made our way to the breath-taking Buyuk Han or Grand Inn. It as built in 1572 by the Ottomans and was been restored to it’s former glory in the 1990s. The contrast in the city was immediately apparent. We passed by the intriguing Selimiye Mosque as the call to prayer rang out. Formerly it was the Cathédrale Sainte Sophie, so architecturally & spiritually it has been re-purposed.

The result is an odd juxtapostion of east meets west – gothic grandeur, flying buttresses with minarets and ornate window grills. I even spotted a Green man lurking in the masonry over the entrance. Also by the main door there was a suspiciously Scottish looking, ironwork structure used for the washing of feet. It was not dissimilar to a bandstand, however it had obviously been re-purposed too. I was unable to find any makers mark but it was reminiscent of the products shipped around the world by The Lion Foundry of Kirkintilloch. (Image © East Dunbartonshire Council. Licensor www.scran.ac.uk.)

The many souvenir shops in the area were selling Turkish Delight, not Cypriot Delight, as they were just a few hundred metres away. Within the Buyuk Han, we feasted on a meze of Turkish Cypriot dishes and then visited the wonderful Senay Ekingen, at Su-Ha Tic. Senaye studied tourism in England and has run her business since 1987, making Lefkara lace in the traditional manner as well as creating new products to incorporate it, such as bags & jewellery. She also imports her base fabric from one of the last linen producing mills left in Ireland, Thomas Ferguson.

Not only is she a successful businesswoman, but Senaye also works on bi-communal projects, using craft to bring together Cypriots from both sides of the divide and trains up young apprentices too. Thereby generating hope for the future and breaking down barriers. Later we visited the amazing Yagcioglu haberdashery, which stocked the all-important DMC (Dollfus-Mieg & Compagnie) French embroidery thread for making Lefkaritika, in an extensive back catalogue of colours. (Here’s an example of embroidery on Scran using DMC thread)

We wound our way back along the colourful Ledera Street, via the folk arts museum, stumbled on some Limassol Brick & Tile co. roof tiles for good measure & once again crossed the Green Line, pausing to look at the contemporary sculptures in our path.

Thanks to Archnetwork, Scran will be participating in one of their wonderful learning programmes.  We will be finding out about European diversity in cultural & natural heritage in Cyprus! 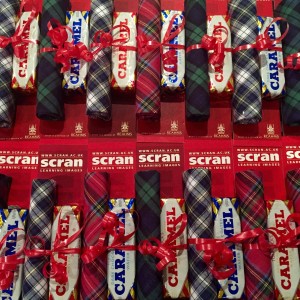 Scran, Tunnock’s & Tartan – a selection of Scottish favours for our Cypriot hosts

Kato Drys, is a traditional Greek Cypriot Village at 650 metres in the foothills of the Troodos mountains. The village is a centre for teaching about sustainable rural development. It was a partner in the ‘Leonardo da Vinci – Development of Innovation’ project 2010-13 and is entitled a ‘Green Village’. During that project the Community Council, led by the Muhktari (Mayor) Nikos Vasiliou and European Officer Panayiota Demetriou, worked on the themes Empowering Communities, Rural Food and Wood Products.

Now in 2015, Kato Drys Community Council in partnership with Archnetwork (within the framework ‘Erasmus Plus’) offer placements for education staff. Each placement revolves around a structured training course. The themes of the course follow two basic strands, culture or nature. 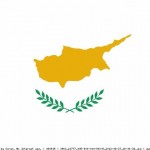 Culture – that’s where Scran fits in.  So we’ll be bringing you updates from our overseas expedition in the coming weeks. We’ll share what we learn here on #Scranalogue and via Twitter @Scranlife, keeping you posted on the finer things in life, such as pottery firings and lace making. Along with our colleagues from The National Trust for Scotland, Strathnaver Museum & Caithness Horizons we’ll be visiting the Turkish Cypriot State, in Northern Cyprus and revealing some poignant Scran records related to the 1974 conflict.

So, follow us & find out what we get up. We are hoping our Tartan & Tunnock’s favours survive the journey and our hosts enjoy a wee taste of Scotland.