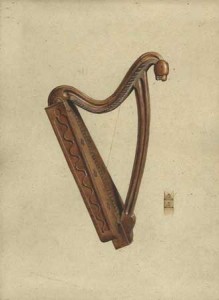 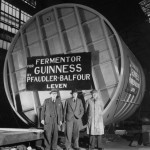 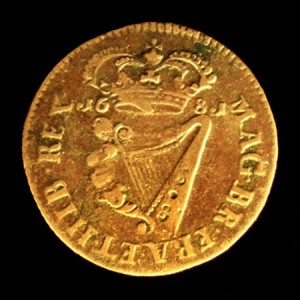 As the BBC announce they are to begin shooting a new film about the lives of Laurel and Hardy, we’ve trawled the Scran archives and found images of the comedy pair visiting Scotland on a number of occasions in the 1940s and 1950s. Laurel and Hardy  remain one of the best known duos of American film comedy. Their slapstick style and faultless comic timing are still popular today, even though the first of their films was released way back in 1927. 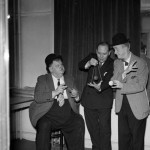 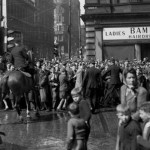 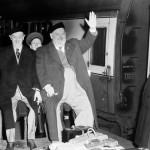 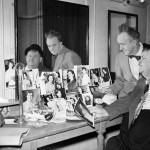 Stan Laurel was born Arthur Stanley Jefferson on 16th June 1890 in Ulverston in Cumbria. He was the son of a showman. By the tender age of 16, Stan was performing in music hall. He started as a supporting act but eventually became the star of the show and even understudied Charlie Chaplin. In 1912, he emigrated to America and changed his name to Stan Laurel. He found work but it took 12 years before he was recognised as an act of some merit. He performed eccentric mime and was known as a ‘nut comic’.

Oliver Hardy was born in Harlem in 1892. He started in show business at an early age and by his late teens was a singer and ran a movie house with his mother. He aspired to take up comedy and started working with Lubin Motion Picture in Florida. By 1914 Oliver was acting and over the next two years made an astonishing 177 short films. He played a variety of parts – even women. Movie makers were keen to employ him and Oliver Hardy found himself in demand.

Laurel and Hardy first appeared together in a film called ‘Lucky Dog’ in 1919. However, it was not until 1927 that they starred as the now so familiar Stan and Ollie in the movie ‘The Second Hundred Years’. Hal Roach decided the two should become a permanent duo and for the next ten years he worked with them, making silent short movies, talking pictures and feature films. Most silent movie acts found the transition from silent to talking pictures difficult but the contrast between Stan’s English and Oliver’s American accents and Oliver’s singing added new dimensions to their act.

‘Well, here’s another nice mess you’ve gotten me into!’

The well known catchphrase, often misquoted, is the most quoted line in the Laurel and Hardy movies. The basic premise of each of their movies was that Laurel and Hardy are two dimwitted men who try and accomplish something simple, but make so many mistakes that they spoil everything. Laurel was portrayed as the dimmer of the two.

They used a great deal of slapstick humour and comical violence. The results of this violence were not always shown but sometimes illustrated by sound effects. Another common but smaller theme was what Stan Laurel called ‘White Magic’ where he would perform a bizarre and impossible feat such a getting dressed in seconds or using his thumb as a cigarette lighter. While their on screen personalities portrayed Hardy as the more organized man, it was the opposite in real life. Laurel wrote most of their material.

Visually the two made a great comical pair. Stan Laurel was of average height and build but Oliver Hardy was a large and very tall man, making Laurel seem smaller. They dressed to emphasise this. Laurel wore a tight fitting suit and a bow tie, Hardy wore loose fitting clothes and a neck tie. Both wore bowler hats and had stylized haircuts.

After many years working with Hal Roach the duo went on to work with 20th Century Fox and Metro-Goldwyn-Mayer. The films they made there were big box office hits but the duo had far less creative input than they were used to and critically the films were not as well received. Laurel and Hardy decided to take to the stage instead and toured Europe. They made one final film together in 1950 called ‘Atoll K’ but both men were succumbing to ill health and it showed on camera. The film was not well received. After a short recuperation break the pair continued to work, doing small public appearances and making their only American TV appearance on ‘This Is Your Life’. Their final public appearance was for a documentary about the British Variety Organisation called the Grand Order of Water Rats. Their last appearance on camera was a silent home video shot at Laurel’s home which they called ‘One Moment Please’.

Neither Laurel or Hardy ever recovered from their ill health. Hardy was instructed by his doctor to lose weight and rapidly shed over seven stone. The weight loss may have done more harm than good as he suffered a series of strokes. He lost mobility and speech and after a major stroke on August 7th 1957 he died, a shadow of the man he had been, weighing only 9.9 stone. Laurel was very ill himself, too ill, in fact, to come to Hardy’s funeral. This upset him but he knew his long-term comedy partner and friend would have understood.

Laurel refused to perform again, despite requests, although he did continue to write. He wrote for other film-makers but also continued to write for Laurel and Hardy – material he wrote for his own pleasure. He also enjoyed correspondence and insisted on replying to every piece of fan mail personally. He was awarded an Academy Award for his contributions to film comedy in 1960. He died on 23rd February 1965 in Santa Monica. 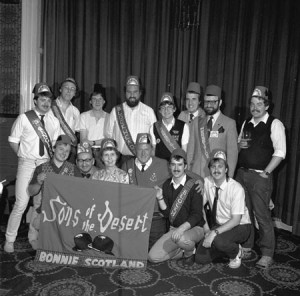 Sons of the Desert

‘The Sons of the Desert’ is the official Laurel and Hardy appreciation society. Set up by a fan and friend of the famous duo, John McCabe, the organisation took its name from one of Laurel and Hardy’s films. Stan Laurel himself contributed to the group’s constitution. The crest bears the words ‘Two minds without a single thought’ in Latin. Each branch has a ‘Tent’ name, again a film title. There are now almost 220 ‘Tents’.