Whenever new records (individual images, videos or sounds) get added to Scran, they’re uploaded in batches or, as we call them, Projects. These Projects are discrete blocks of material, usually on a particular topic or theme. If you find a Scran record that you enjoy, you can click the “View All Records in Project” link in the caption metadata- the bits of extra info under the postcard-sized image- and see more related materials. Similarly, you can see all the Projects that we’ve uploaded by clicking on the word Search in the red toolbar at the top of any Scran page, selecting Projects, and then selecting Find All. 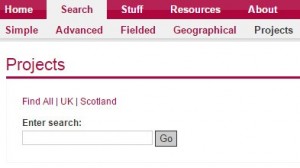 The titles and subjects of these Projects vary. The first one uploaded (number 001) was The Kilmartin Monuments, while the most recent at the time of writing (number 1128) collects images of Edinburgh taken by Italian students. Between then and now, we’ve uploaded projects on Product Design (number 950), Montserrat (number 911), the collection of Orkney’s Pier Arts Centre (number 687), as well as over a thousand more. Sometimes these Projects contain only 20 images or so, occasionally even fewer. The largest, the V&A Collection (number 930), numbers nearly 26,000 images.

Usually these Projects, once loaded onto Scran, are not revisited or revised by our staff, save for minor edits, typos, additional info being added etc. All of which makes Project number 540, Scottish Writers, a little unusual. A few weeks ago, one of our IT staff- thanks, Sven- noticed that the project was never fully completed, and all the submitted video clips were not uploaded. Why this should have happened is unclear, the reasons lost in the mists of time.

However, we’ve now rectified this and, some 16 years after submission, the videos now appear in full on Scran!  They’re definitely of their time, being short and quite low resolution, BUT the content is terrific. You can now see Ian Rankin, Iain Crichton Smith, Theresa Breslin, Anne Lorne Gillies, Tom Pow, Julie Bertagna, Alan Spence, Alison Prince, Cathy MacPhail, Bernard MacLaverty, Carl MacDougall, Des Dillon, Dylis Rose, George Mackay Brown, janet Paisley, Janice Galloway and Joan Lingard talking about, and reading from, their work. This material will be particularly useful to language and literature teachers, but anybody interested in Scottish literature in its “golden age”, as Iain Crichton Smith described it, will find these archive clips fascinating.

Robert Burns is not only Scotland’s best known poet and songwriter but one of the most widely acclaimed literary figures of all time. He is held in very special affection by millions around the world, with Burns’ suppers taking place on or near his birthday on the 25th January. 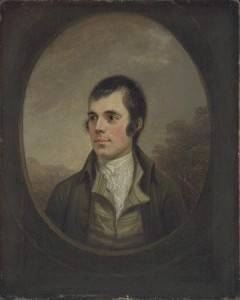 Burns’ stature owes much to the huge range of his songs and poems, some of which are still familiar nearly two hundred and fifty years after his birth. In fact, there would be few English speaking people who do not recognise “Auld Lang Syne” – a staple at New Year celebrations.

His popularity is also linked to his association with a brand of socialism radical for his time and timeless in its understanding of the plight of the common man. Burns would have naturally understood these issues having experienced hardships not untypical for the ordinary man of the eighteenth century.

He was born in 1759 in the village of Alloway, in Ayrshire and was the son of a small farmer, Jacobite in sympathies, who had moved from near Stonehaven in Kincardineshire. In Scots rural tradition – which Burns himself recognised in “The Man’s the Gowd for A’ that” – and probably because of his father’s support of education, Burns had a fairly extensive education. He attended several schools and was given lessons from his tutor, John Murdoch, who introduced him to Scots and other literature in the English language. The family was never wealthy, living on and scraping a bare living from poor farming land. When Burns’ father died in 1784, he and his younger brother, Gilbert, tried and failed to make a success of farming at Mossgiel, near Mauchline. Also at this time, Burns began what was to be a stormy relationship with Jean Armour whom he left and betrayed many times.

His intensity, bred of hardships, seems to have caused Burns to produce some of his finest literary achievements. With a formal educational background, supplemented by a desire to read great literature and an admiration for the work of Allan Ramsay the elder, and steeped in Scots traditional ballads and legends, Robert Burns began to create his earliest and some of his best loved poems.

In 1785 and 1786 alone, Burns wrote, amongst other works, ‘The Address to a Mouse‘, ‘Holy Willie’s Prayer‘, ‘The Cotter’s Saturday Night‘ and ‘The Twa Dogs‘ and published his later famous Kilmarnock Edition with the intention of emigrating to Jamaica to seek a better existence. However, the popular response to his book of poems attracted him to Edinburgh to receive the adulation of the polite society of the capital, who became fascinated by the ‘ploughman poet’ and dubbed him “Caledonia’s Bard”. 3,000 copies of his Edinburgh Edition of poems were selling well at this time.

In 1787, he first visited Dumfries and was immediately made an honorary burgess. In 1788, unsure of making a living from the pen, he signed a lease on Ellisland Farm on the banks of the Nith and sought employment as an Exciseman. This was a latter day VAT man and Burns used his income to supplement his farm. His health was variable but during that time, he edited – with James Johnson – the second edition of the ‘Scots Musical Museum’. It was published in 1788 and contained 40 of his own songs. The third volume, which appeared in the following year, had 50 more. 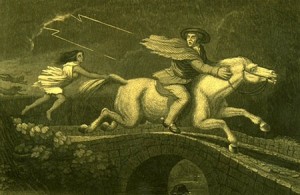 Burns asked Captain Francis Grose who was compiling a book on the antiquities of Scotland to include an illustration of Alloway Kirk. Grose agreed provided the poet would contribute a ‘witch story’ to accompany the drawing. The result was ‘Tam O’Shanter’. The poem was written in a single day on the banks of the Nith and is arguably one of his best works.

After two years, Burns gave up the farm and moved to Dumfries as a full-time Exciseman. During this time, Burns had at least one major affair and sired a daughter whom his own wife agreed to raise. Burns led an erratic lifestyle, being alternately drawn to and repelled by the bourgeois lifestyle. He wrote poems in English instead of his vernacular Scots, and flirted with ‘Clarinda’, Agnes McLehose. 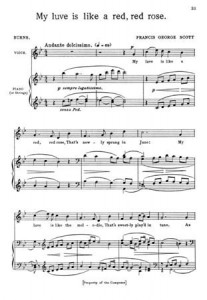 In May 1793 the family moved to a better quality house in Mill Street (now Burns Street). Their standard of living was good and they employed a maid servant. He was now writing songs for a new book ‘A Select Collection of Original Scottish Airs’ produced by George Thomson. At the same time, some of his most lasting songs like ‘My Luve is like a Red, Red Rose‘ and others set to traditional airs, which revived the words and tales of ballads, were produced.

The war with France was causing food shortages in Britain. In March 1796 there were serious food riots in Dumfries. Gradually, during the year, Burns’ health became poorer and in April he was unable to continue with his Excise duties. His friend Dr Maxwell mistakenly diagnosed his illness as “flying gout” and prescribed sea bathing as a cure. On the morning of Thursday 21st July he became delirious. His children were brought to see him for a last time and shortly afterwards he lapsed into unconsciousness and died. He was 37 years old.

It was the intention of friends that a biography of Burns should be written as soon as possible and the profits used to aid Mrs Burns. Dr James Currie, a Liverpool physician, who came originally from Annan, was chosen as biographer. The biography, published in 1800, was an immediate success and raised £1400. However, when Dorothy and William Wordsworth visited Dumfries in 1803 they had difficulty in even finding Burns’s grave. So, in 1813 subscriptions were sought. One of the subscribers was the Prince Regent, later George IV. On the 19th September 1815 Burns’ body was exhumed and placed in the new mausoleum. In 1823 the cenotaph on the banks of the Doon at Alloway, Burns’ birthplace, was completed at a cost of £3300. In 1844 a huge festival in his honour was held at Alloway, presided over by the Earl of Eglinton. The centenaries of his birth in 1859 and his death in 1896 saw nationwide celebrations.

The cult of Burns rapidly rose. As the ‘National Bard’ he assumed spiritual dimensions, becoming all things to all people – admired as poet, nationalist, democrat, republican, conversationalist, womaniser, drinker, naturalist, folklorist, lyricist, Freemason and atheist to name a few. His humble origins, in particular as the ‘heaven taught ploughman’, have added to the idolatry.