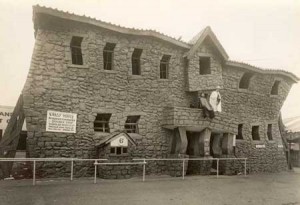 They all feature in the entries of ‘366 Days of Architecture’, a project that every day comes up with an image in the national record, Canmore, that relates to a fact specific to that day.  It’s one of Historic Environment Scotland’s contributions to the 2016 Festival of Architecture, for the Scottish Government’s Year of Architecture, Innovation and Design.  And it’s happening every day this year.

The image of the day can tie in with any associated event and demonstrates that diversity of digitised images in Canmore.  The whole year has already been pretty much mapped out and related events include anniversaries, birthdays, sporting competitions, the signs of the zodiac and saints’ days. The big names in Scottish architecture all feature in the project, along with links to their entries in the Dictionary of Scottish Architects.  Similarly, images connected to non-architectural historic events, current sporting championships and popular culture also crop up throughout the calendar. Social media is very much at the heart of ‘366 Days of Architecture’ and staff from the Communications team and Architecture and Industry section of the HES Survey and Recording group have been working together to deliver the project.  The daily image is tweeted on the twitter feed @rcahms, with a link to Canmore. 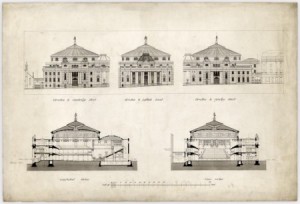 Neil Gregory, Operational Manager for Architecture and Industry, and curator of January and March’s entries to date said: ‘The great thing about Canmore is that it features buildings that connect with anybody and everybody. Architecture has a place in everyone’s lives and buildings form a backdrop to every tangible cultural event. We hope that 366 Days of Architecture will bring new audiences to Canmore, entertain our current users and the wider public who enjoy using Twitter’ 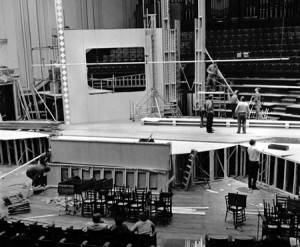 Usher Hall set up for Eurovision 1972

He added: ‘The great thing about the project is that there are always bags of images, film clips and sound snippets in Scran so we’ve had great fun finding complementary material on the Scran website. An event like the 1972 Eurovision Song Contest that took place at the Usher Hall in Edinburgh gives us a chance to showcase 1910 designs for the building that were never realised on Canmore and pictures of the contest happening that are held within Scran’

Clare Sorensen, Architecture and Industry Projects Manager, and curator of February and April’s entries to date added: ‘The project is a real showcase for the historic collections that we care for here at HES as well as the sheer variety of buildings that we have recorded as part of our survey projects. We’ve so far featured buildings recorded in the early 20th century in RCAHMS’ infancy as well as sites that we’ve investigated in the last few months as part of the new organisation’

‘366 Days of Architecture’ can be accessed via the daily tweet from @rcahms or directly from the front page of Canmore. To find out more about what’s happening in the Festival of Architecture, including other HES contributions, check out https://www.foa2016.com/