You may have read about our collaborative school activity at Killermont Primary School, in Bearsden? This 6 metre long frieze is the result of P6’s hard work & creative flair.

After thinking about the work of Willie Rodger, individual figures were printed by each pupil. These silhouettes represent Bearsden commuters, dashing to and from the railway station. Next, the class cut up pictures of local housing built following the arrival of the railway in 1863 – bringing businessmen & prosperity to New Kilpatrick. Finally, the local buildings & commuters were collaged together. 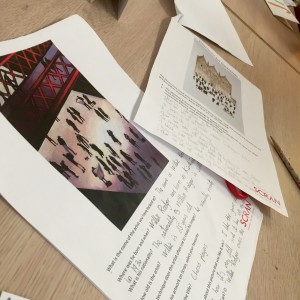 The class proved to be highly successful art detectives too – at home they researched the artist Willie Rodger using Scran. They shared their findings in class the following day. Astute observations were made & we discovered plenty of visual clues hidden in the imagery.

Following a group vote, with 6 votes each from of a class total of 32, the two most popular Willie Rodger artworks were The Chess Players & Honeymoon. 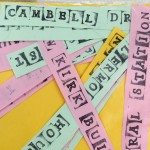