Up Helly Aa celebrations take place on the last Tuesday of January . They are one of the United Kingdom’s most spectacular winter festivals. The festival, centred in Lerwick on the Shetland Islands, takes a year to plan and spans two days.

The modern version of Up Helly Aa – meaning “end of holidays” – has its origins around 1815 when young men returned from the Napoleonic war where they had experienced the banging of drums, fires, and guns. Out of such excitement came a desire to create an event which would enliven the long dark winter months. Early activities, particularly tar-barrelling where lit barrels of tar were pulled along the narrow street towards rival gangs, gave way to a more organised festival and by the 1950s the modern Up Helly Aa had evolved. 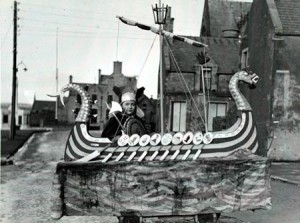 The Festival is based around both the legends of Norse mythology and the very real links between Shetland and Norway which go back more than 1000 years. In the old Norse calendar Up Helly Aa was the last day of the winter festival and was celebrated on the 24th day following Yule. Shetland’s Up Helly Aa is held on the last Tuesday in January and concludes with the burning of a replica Viking long boat. 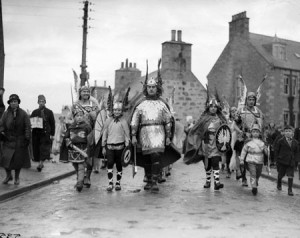 Each year, a Guizer Jarl or leader is nominated and the whole community work for some considerable time building and naming a new galley. Costumes and 1000 torches are prepared and arrangements are made for a series of parties. The Guizer Jarl (Head Viking) will have nominated himself to the Up Helly Aa committee 15 years in advance. It is therefore a long wait to fulfil the role. Preparation includes the selection of a squad of around 50 men who will form the squad. Direct debits will be set up over 15 years to pay for each costly suit (around £1,000) and other event costs. Being part of the Jarl squad is an honour and men spend long hours preparing their costumes and rehearsing. 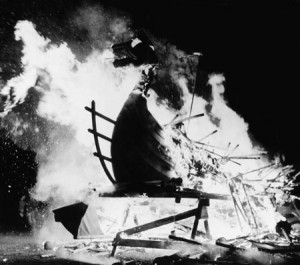 On Up Helly Aa morning the Jarl Squad meets, accompanied by the local brass band. All march to the Lerwick Legion where they receive their first dram of the day. Waiting outside are crowds of school children, locals and tourists – and, of course, the new galley, especially named for the day. The Guizer Jarl – wearing traditional Viking apparel – hoists his axe aloft aboard his long ship and calls on his Jarl Squad to begin the Festival. The Squad then processes through the town centre led by the Jarl. They carry banners and weapons as though on a raid.

At this stage they deliver their “Proclamation” to the town – a light hearted document – which is displayed at the Market Cross in the town centre. Many folk stop to read and have a laugh as they read it. The proclamation (or bill) is erected as a large billboard which has been skilfully painted by local artists. The text includes local political topics and personal jokes. The Jarl squad spend the rest of the day visiting schools, hospitals, houses and the local museum.

At 7.30pm, the leaders use crimson flares, or maroons, to signal the lighting of the torches and the start of the procession. Torches are wooden stakes, the size of fence posts, dipped in a combustable resin. They resemble giant matches. Lit by torchlight, the procession makes its way along King Erik Street and the Galley makes her last journey to the special burning site. Guizers, the Jarl’s men, wear specially made costumes inspired by mythological creatures such as serpents, double-headed eagles, and dragons. At the “Last Rites”, the procession reaches the burning site. The Galley is positioned as a centrepiece and the glowing torches are thrown into the boat. The flames engulf the galley reminiscent of a Viking leader’s burial. Only then are the feasting halls opened to receive squads. Those not involved in the procession have prepared food and set up parties. As dictated by tradition, the squad tour as many halls as they can. And the festivities last till morning.

For more pictures of Up Helly Aa including some stunning Hulton Getty photographs visit Scran.