Around January 25th, Burns’ Clubs, and other lovers of the poet, arrange Burns Suppers. Burns has always attracted massive support. 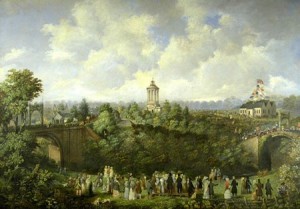 This painting, by an unknown artist, depicts the 1844 Burns Festival. The procession, which started in Ayr, is shown passing over the new and old brigs o’ Doon and entering the festival site at the Burns Monument, where Burns’ three surviving sons were guests of honour. The event attracted over 100,000 participants and involved the construction of a banqueting marquee for 1400 invited guests, seen to the right of the picture. A platform was constructed in front of the Monument to enable the guests of honour to be seen by the crowds and to deliver the speeches. 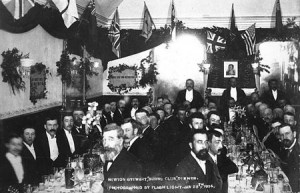 Greenock enthusiasts founded the earliest Burns’ Club on 21st July 1801 and had their first supper on 29th January 1802; which at that time was mistakenly thought to be the anniversary of his birth. Following close on their heels were clubs at Paisley, Kilmarnock and Dunfermline. Throughout the century more and more clubs sprang up either in Scotland or wherever Scots met. One of the earliest in England was the Bristol Caledonian Society founded in 1820. By 1885 there were so many Burns’ Clubs in existence that an international Federation of clubs was instituted. 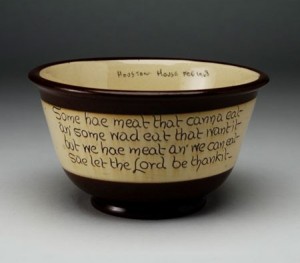 A few welcoming words start the evening & the meal commences with the Selkirk Grace:

Piping in the Haggis – Before the Haggis appears, one should hear the skirl of the bagpipes and the company should stand to receive the haggis. A piper then leads the chef, carrying the haggis to the top table. The guests accompany this with a slow rhythmic hand clap. 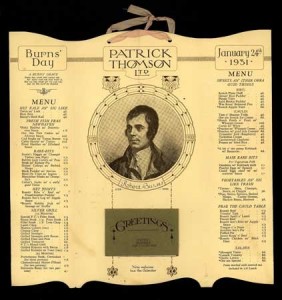 Address to the Haggis – The chairman or invited guest then recites Burns’ famous poem To A Haggis. When he reaches the line “an cut you up wi’ ready slight”, he cuts open the haggis with a sharp knife. The company applauds the speaker and then are asked by their host to stand and toast the haggis with a glass of whisky. The meal is then served.

The Immortal Memory – An invited guest is asked to give a short speech on Burns. There are many different types of Immortal Memory speeches, from light-hearted to literary, but the aim is the same – to outline the greatness and relevance of the poet today.

Toast to the Lasses – The main speech is followed by a more light-hearted address to the women in the audience. Originally this was a thank you to the ladies for preparing the food and a time to toast the ‘lasses’ in Burns’ life. The tone should be witty, but never offensive, and should always end on a friendly note.

Response – The turn of the lasses to detail men’s foibles. Again, this should be humorous but not insulting.

Once the speeches are complete the evening continues with songs and poems. The evening will culminate with the company standing, linking hands and singing Auld Lang Syne to conclude the programme. 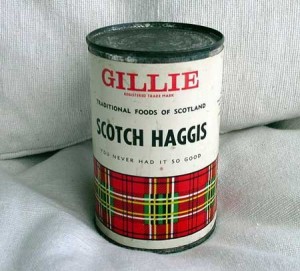 The food varies according to custom and locality but, in general, the meal should feature a Haggis. The usual accompaniment is Tatties [potatoes] and Neeps [turnips or swedes]. Other components might include a soup such as Scotch Broth or Cock-a- Leekie and there may be Atholl Brose or cheese and bannocks [oatcakes].