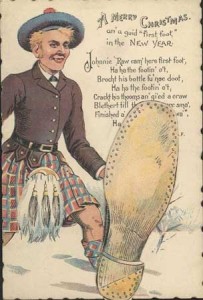 The celebration of the New Year is one of the oldest of all holidays. It was first observed in ancient Babylon about 4000 years ago when the beginning of spring was the logical time to start a new year. The Babylonian new year celebration lasted for eleven days.

The Roman senate, in 153 BC, declared January 1 to be the beginning of the new year. But it wasn’t until Julius Caesar, in 46 BC, established what has come to be known as the Julian Calendar that the months became synchronised with the seasons and the sun. The early Catholic Church condemned the festivities as paganism. But as Christianity became more widespread, the early church began aligning its own religious observances with many pagan celebrations. During the Middle Ages, the Church remained opposed to celebrating New Year. However, it remained an important festival linked with mid-winter. 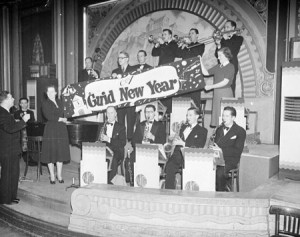 Traditions of the season include the making of New Year’s resolutions which dates back to the early Babylonians. Using a baby to signify the new year was begun in Greece around 600 BC. They celebrated their god of wine, Dionysus, by parading a baby in a basket, representing the god’s rebirth as the spirit of fertility. Luck in the New Year – traditionally, it was thought that one could affect luck throughout the coming year. For that reason, it become common to feast and make merry into the first moment of the new year – hence New Year’s Eve. This feast took place with family and friends.

For many English speaking countries, Scotland has come to represent a focus for New Year with its own particular Hogmanay [New Year’s Eve] and New Year’s Day celebrations which weave pagan and winter themes together. In Scotland, for many years, the official winter holiday was New Year’s Day and not Christmas Day. Over the last fifty years, Christmas has become more equalised in regard. There is a particular vocabulary to a Scottish New Year: 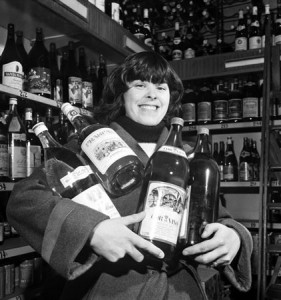 Whisky is seen as an important part of the festival where one sips a dram [a measure of whisky] and proposes toasts to the New Year – maintaining the association with wishing a lucky year.

First Footing is very important in Scotland. This is where the first person to set foot in your house, after the midnight bells chime, should bring luck. It is particularly lucky if that visitor happens to be a tall dark-haired man. First Footers have to be treated generously but also should show their own generosity. All-in-all, it’s a great excuse for a party into the wee sma’ hours [early hours of the next morning].

Gifts should be carried by the first footer. Traditionally, they are expected to carry at least aHawf or half bottle of whisky. You may be invited to “have a wee hawf” – to take a glass of whisky with the first footer. In fact, this is expected – and in return, the first footer will drink from your bottle. First Footers used also to carry a lump of coal with them and this would be thrown on the fire with the wish that lang may yer lum reek [long may your chimney smoke]! One should also carry something to eat and, traditionally Black Bun – a rich cake full of currants and perhaps alcohol – was provided.

Good Spirits & Fellow Feeling are expected. All those who meet after the bells are expected to wish each other a Guid New Year; and to shake hands and kiss if they know each other.

Many sing Auld Lang Syne at New Year – probably best sung at parting. At least partially written by Robert Burns in the 1700s, it was first published in 1796 after Burns’s death. It is old Scottish tune and literally means “old long since,” or simply, “the old times.” It mixes the perennial constants of Scotland at New Year – generosity, sentimentality and reminiscence with those you love and remember. Here are the most commonly sung verses:

Should auld acquaintance be forgot, 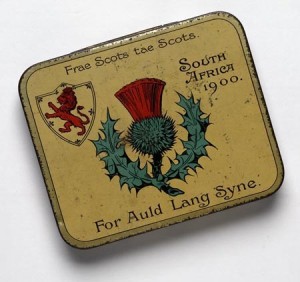 And never brought to mind?
Should auld acquaintance be forgot,
And auld lang syne?

And there’s a hand my trusty fiere,
And gie’s a hand o thine,
And we’ll tak a right guid-willie waught,
For auld lang syne.

A very Happy New Year to You from Scran