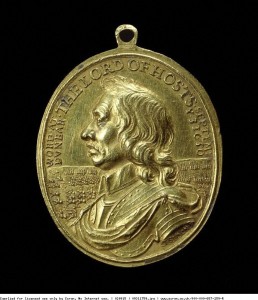 With the recent archaeological discoveries in Durham of Scottish soldiers in a mass grave, you might be curious to learn more about what happened at the Battle of Dunbar in 1650.

Today Dunbar is affectionately known as Sunny Dunny by locals, however it has a much bloodier past. Cromwell invaded Scotland in July 1650, after the Scots had ignored his appeal for support and had proclaimed Charles II King. Cromwell crossed the border and attempted to meet up with his fleet at Leith and again at Queensferry, but without success.

He retreated to Dunbar where, in September of 1650, he was faced with a Covenanting army of over 20,000, led by David Leslie. To find out more see our dedicated Pathfinder: The Battle of Dunbar, it includes this medal, re-enactment imagery and an illustrated map of the event too.

Image © The Trustees of the British Museum, Military Award for the Battle of Dunbar, featuring Cromwell.  Licensor www.scran.ac.uk