I knew I would not have much input in the class. Because I am only in one classroom the majority of the day is spent learning in French. In France it is essential that children have at least one hour and thirty minutes of English a week, however, this is not very much considering the long days. Therefore, I could not guarantee that I would hear any English learning throughout the day.

The morning was dedicated to the children’s radio project. I was relieved when I found out as I knew I would be involved in the morning. I sat with the two pupils to practice the questions to ensure both parties understood exactly what they were saying when they were saying it. I found that though answering various questions in French has allowed to improve my speaking skills. I am still not confident when talking in French because of my Scottish accent, however, I am beginning to understand more French as I listen to various conversations within the classroom. I am surprised at how much I have learned in less than two weeks in the school environment. I was very nervous going into the placement as listening and talking were the two skills that I have never found easy. When I was studying French in high school I gained a B at higher level, however, it was my listening that let me down. This meant that going into the school I was very worried that I would sit, listen, and not have a clue what anyone was saying. At the beginning this was the case, however, as the days go on I have been understanding more and more. This is a personal achievement as I never thought I would begin improving so early on. I am not going to pretend that I am going to come out of the learning from life placement fluent in French, but I believe my speaking and listening still will have improved.

Having a greater understanding of the French language is allowing me to begin to communicate with the children more and more. They love to try and talk to me in English, however, they are equally as impressed when I attempt to talk to them in French. They are aware of my level and are very encouraging when I try and converse in the language. Since the children and teacher are so supportive it makes me feel better about speaking in French as I know I am not being judged or criticised.

There were two French students in the class on this day. Both are students at the l’ESPE and are studying to become primary teachers. Watching them come into the classroom and communicate with the children easily is something I envy. Despite them only being in the classroom for one day a week the children are able to converse with them easily and therefore, it is easy for them to form relationships with the children. I understand that this is something that cannot be helped, however, I believe I am trying my best to build positive relationships with the children in the class. I am the only student doing learning from life in Orléans that has one specific class. Everyone else is in various classes throughout the school. This means that I should be able to gain the trust and respect of the children in my class as I am with them all the time and they can get to know me. This is one of my placement goals as I realised from my professional practice in first year, building positive relationships with both staff and pupils in essential in becoming a successful teacher.

One of the students led a lesson before lunch. This moved away from the traditional learning I was so used to seeing in the classroom and allowed the children to take part in an activity. The lesson revolved around growing plants in soil. The student used a PowerPoint to explain to the children how a plant grows before allowing the children to plant their own bulbs. The children were very excited and enthusiastic about this activity 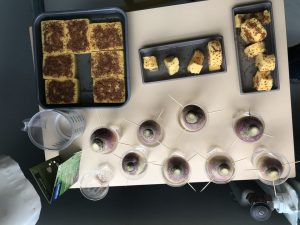 . It reminded me of the kinds of lessons that are encouraged in the Scottish education system. Interactive learning is something I have not seen a lot of since being in France, however, seeing a French student teach such an engaging science lesson full of interactive experiments allowed me to realise that the French are beginning to adopt this method of teaching. Young teachers coming into the profession are moving away from the traditional method and incorporating teaching strategies to ensure the children thrive in their learning.

In the afternoon the children were recording their radio show at a neighbouring school. We walked to the school after lunch to use the recording studio. The children were very excited about this, they had been working on their radio project for a number of weeks now. I was very excited to be a part of their project and conduct an interview for two of the children in English whilst I was interviewed in French. It was a great opportunity to combine the languages and work with the children. This helped me to gage the level of English the children were working at. The two girls that I interviewed in English were very competent and were able to answer my questions with ease. This allowed me to understand that when planning the ‘going shopping’ topic I can add more complex vocabulary. It is great to see how enthusiastic the children are about languages. I am looking forward to teaching next week on my own. I believe that from observing the class for two week I have a good understanding of how they learn best and various teaching strategies I will be able to use when I am teaching on my own. I realise that I just have to be confident and use approaches such as repetition and actions to aid their understanding.