On Monday I had my first experience in a CP classroom. Having spent the previous two weeks with CM2 I was very excited about observing and teaching various other stages within the school. Going from the oldest class to the youngest was a big change. It was interesting to see how teaching in the early years differs. The children in CP are aged six and seven. This is because in France children begin school at six, unlike Scotland where children can be as young as four years old.

There are three CP classes in Romain Rolland, however, I just observed one. The first thing I noticed going into the class was how young the children were, having gotten so used to working with the oldest class in the school this was a big jump. The day began with a

French lesson. The children were doing what we would understand as phonics. They were revising various new sounds before focusing on a new sound. I found this lesson very useful as I learned many new words. Because I don’t have a high level of French this basic French lesson taught me a lot.

In Scotland I believe that early years teachers adapt their teaching style to suit the younger children, taking on a more maternal role. I found that in France the teachers do not treat the younger children any different for the older ones. I believe that, in general, teachers in France are a lot stricter. Although I don’t totally agree with strict manner of the teachers, I have noticed that the children in France are very well behaved and respect the teacher. This shows that despite it seeming like a cold approach, it works well within the classroom. The children do not test boundaries and understand their place in the classroom even in the youngest primary.

After morning break the children had a French lesson on the topic of appearance. I stood up at the front of the class and they had to describe what I looked like and what I was wearing. The children in CP were very shy as I was a new face in the classroom. I walked around the class as the wrote down their descriptions. One thing that I noticed that surprised me was how neat their handwriting was. Having observed in early years classrooms in Scotland, handwriting is something that usually improves with age. However, the children in CP’s handwriting was just as good as the children in CM2. This may be to do with the strict teaching style most French teachers adopt. If something is not done correctly the child must do it again until successful. This also allowed me to think about the fact that children in France begin school at the age of six. This could be a factor in the level of work they are producing. From observing the CP class, I believe that starting school at age six is a very good thing. The children are at an age when they are ready to learn and do not need to be treated as babies. 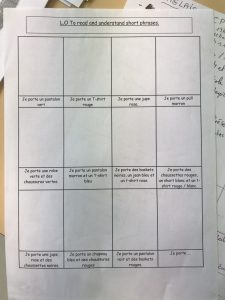 In the afternoon I had some time to plan before doing my first English lesson in CM1. I was nervous as this was the first teaching opportunity I had had since arriving in France. I had planned a lesson around clothes. The children had to describe what they were wearing before doing a memory game with words and pictures. This proved very challenging as the CM1 class were very restless and noisy. I found myself having to constantly ask them to listen as they kept talking over each other. In France they don’t use the term behaviour management strategies and therefore teachers don’t have a set way to handle behaviour. I found this difficult as I could not imitate the teacher and had to try and resolve the behaviour on my own. I used both English and French to address the children that were distracting the class, however, because it was the last half an hour of the day the children did not settle. Despite this, I still managed to teacher my lesson. I believe that the children are very competent when it comes to the topic of clothes. They had a sound understanding of both the words and the pronunciation. I believe that moving forward more complex vocabulary can be added into the lessons to challenge them more. Overall, my first experience teaching was stressful but also very exciting it has given me a taster of what I can expect of the coming weeks. I believe that the use of games in relation to learning English is very important as it engages the children and allows them to associate the language with something fun.