I went into my second week of placement very enthusiastic and excited about the week ahead. Having already spent a week in a French school environment I was eager to get back into the school routine. This was my first Monday in ‘l’ecole Romain Rolland’ and I was interested to see if the Monday routine was any different from the other days due to the change in teacher. A supply teacher takes the class on the first day of every week as their normal teacher only works four days a week. I had the chance to meet this teacher last Wednesday. Last week I reflected upon the fact that this teacher could not speak English and the difficulties I faced because of this. I made a real effort to converse with the teacher in French on this day. Throwing myself into the French language is the only way I’m going to improve my communication skills.

The children had an English lesson, there is an English language assistant that works on various days throughout the week. The topic the children were working on was clothes. Repetition was a major part of this lesson. The teacher gave the children a worksheet detailing pictures and names of various items of clothing. He would say the word and ask the children to repeat after him. Once they became more confident he would ask individual children to stand up and tell that class what they were wearing. It was clear to see that the children in CM2 find English difficult due to the different pronunciation of words. This is something that I must consider when I am assisting the children with their English. Through what  I have witnessed so far, speaking the language is key in successful learning. This allowed me to consider the way in which we teach language in Scotland. I believe that we focus more on 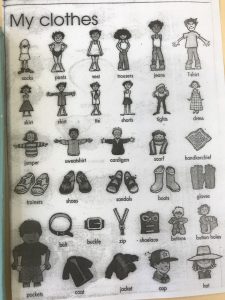 reading and writing and not as much on the conversational aspect of the language. I believe that when I become a qualified teacher I will ensure that the spoken aspect of foreign languages is not forgotten. I have also had the chance to gain insight into the way in which the children learn best, I can adapt this to ensure that the children get the best out of their English lessons.

I noticed that throughout the day the majority of lessons are taught through textbooks, worksheets and the teacher writing on the blackboard. It is a very traditional way of learning. In Scottish schools we try to have an interactive classroom, with teachers thinking of creative ways of teaching lessons. This is something I believe should be enforced in the French education system. I believe that children benefit from the way in which the Scottish system enforces education. However, despite the lack of interactive lessons, or range of subjects taught the children in France are always engaged and enthusiastic during lessons. Therefore, this traditional method of teaching may be what works in school to gain the best results.

The children took part in physical education on Monday at the local gym hall. This was about a ten-minute walk from the school. This was the first time that I had observed a gym lesson. Every other lesson that I have observed has been in the classroom. It was interesting to see the children in a different environment outside the school. They were very enthusiastic and rearing to go. However, some of the children forgot their gym kit and therefore had to sit out and watch. The teacher was very strict about this and didn’t make any exceptions. This was the first time I had seen the children do something that wasn’t written in a textbook, I believe that curricular areas such as physical education should be practiced more often within the French school system. I believe that moving forward in this placement I will try and make lessons as interactive as possible so that the children are involved in their learning and are not merely sitting and writing. Having gotten to know the characters within the classroom I believe they would thrive in a more creative learning environment.

One thing I have noticed this week, especially on Monday with the supply teacher was the very literal hands on approach they take with the children. The push, shove and grab the children at times. This is something that shocked me as this would never happen in a Scottish primary school. Putting your hands on the children is not something that happens. However, in France this is seen as normal. The children don’t react when it happens to them, they simply learn their lesson and move on. This is one of the main differences I have noticed thus far. I don’t believe that it is the right approach to take in primary schools, there are better ways to go about disciplining the children. It is interesting to see how different teachers handle pupils. The student’s normal teacher Amélie is very different with the children I have never seen her physically interact with the children. She is very calm, and the children respond to her very well.

In the afternoon CM2 swapped with the class next door. I stayed in the same classroom with a different group of children to help them with their English lesson. However, I was not involved in this lesson as the teacher decided to do it herself.  Swapping classes in the later stages of primary school in France is common to prepare the children from the transition from primary school to high school. The teacher started off the English lesson by asking one of the pupil’s questions about himself in English before moving on to testing various pupils on a poem they had learned in English. This class proved to be very confident in English. I noticed there were certain member of the class that were misbehaving throughout the lesson. This is something I have not been used to thus far. The other children in the class were growing more and more annoyed at these children. This is something the teacher tried to address by raising her voice, however, they continued to act out. It wasn’t until the game of Simon says begun were the disruptive children good. This shows that the traditional teaching strategy of working out of textbooks does not work for everyone and sometimes children need to be more active.