I was both anxious and excited going into my first day of placement. Arriving at the school was surreal, I couldn’t quite believe I was going to be teaching English in a French primary school. After entering the school with my host Nina, I was given a very warm welcome by both staff and my host teacher Amélie. I was very happy to find out that she was fluent in English as the language barrier was something that I feared going into the placement. Although I have basic French and studied the language when I was in high school, I am not very confident. It was good to find out that I was with a teacher that I could converse within in my mother tongue as well as someone that could help me improve my Fre 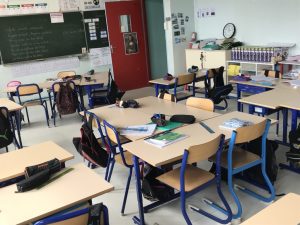 I realised very early on in the day how difficult it was to try and understand native French speakers. The children in my class were all very excited about me being in their classroom and attempted to ask me question after question, in French. At this point I panicked a bit as I realised my level of French was not going to cut it. Throughout the day I tried to pay attention to everything both the teacher and children were saying. I could pick out various words, but the fluency along with the speed was too much to keep up with. This made me realise that during my time in France I would like to improve my conversational French. The language barrier was also an issue in the staff room at lunchtime. I was sitting at a table with teachers talking at what seemed like a hundred miles an hour. This also made me realise how long a two-hour lunch actually is. It seemed like an eternity sitting in silence not understanding what anyone was saying. I knew it was going to be difficult going into a primary school setting where English wasn’t their native language, this is something I believe I will get used to over time. I hope that being submerged in the French language will allow me to improve.

I was already aware going into the placement that my role within the classroom was going to be helping as a language assistant. As this was only my first day I spent a lot of the time observing various lessons. However, when it was time for the children to begin their English lesson, I was given the opportunity to stand up in front of the class while the children asked me questions in English and I answered them in English. This was v 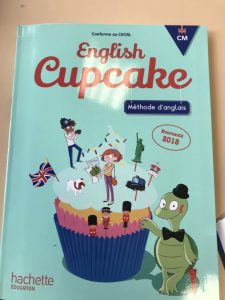 ery good as it allowed the children to get to know me better and ask me questions about both myself and my country. They were very excited to find out that I was from Scotland. I had to ensure that I spoke slowly and clearly to allow them to understand the English along with my Scottish accent. Having this small input in the class allowed me to gain an idea of the level of English the children had as well as the kind of activities I will be doing during my time in school.

Although I have only been in the school for one day it was clear to see that the French school system is very structured. Mathematics and French are always taught in the morning and are kept to a strict time limit. I did not see any expressive arts classes today as they focused on literacy and numeracy. In France I believe that they teach the subjects that are considered more important and more creative subjects take a back seat. This is something very different from Scotland as we ensure there is always time for expressive and creative subjects. Because the children have three breaks throughout the course of the day, this is the time where they can unwind and have fun. This may be why there is a lot less play within the four walls of the classroom. However, I have only experienced one day of work, so I cannot confirm that this is the way in which every day will be structured.

It was great to see the high level of respect the children have for the teacher and vice versa. The children are all very polite and eager to learn and participate in lessons. From the beginning of the day the children were positive and equipped for learning. The children all arrive within the necessary equipment needed for the day ahead, they don’t rely on the teacher to provide stationary as some students do in Scottish primary schools. When a lesson begins, the children all sit very quietly and get on with their work. There was not one person in the class that was disruptive or not getting on with their work. Something else that I noticed was that every member of the class would put their hand up when the teacher asked a question. They all wanted to be involved in their learning and would get excited if they were to be picked to answer a question. This is something I have never seen before in Scottish primary schools. Often, it’s the same children who put their hands up whilst others sit back and don’t offer an answer. This was very refreshing seeing children so enthusiastic about their studies.

Overall, I had a great experience during my first day in a French primary school setting. I got to know the children whilst having my first insight into the French education system. It was challenging at times due to the language barrier, but this is something I look forward to improving throughout my time in France. The first day allowed me to realise how lucky I am to be spending the learning from life placement in France.