Monday was the Easter bank holiday; therefore, Tuesday was my first day back in school after the weekend. I was looking forward to this week as I was now used to my weekly timetable.  I was prepared to teach in the various CP classes throughout the day. In the previous week I had begun the topic of colours. The children were vey engaged and enjoyed these lessons, however, there were still aspects of the topic that they struggled with. On Tuesday I decided that it would be a good idea to continue with the topic of colours. This would allow the children to revise what they learned in the week previous, whilst developing their vocabulary and pronunciation. I planned to begin the lesson in the same way as last time, using flashcards to test their knowledge. I also found that using a book relating to the topic was very effective. They children were very enthusiastic and were keen to answer questions. I prepared a different book for this day, still sticking with the theme of colours. I am hoping that this week I see a progression in knowledge before moving onto a different topic.

I began the morning in my CM2 class. I had the morning to sit at the back of the classroom 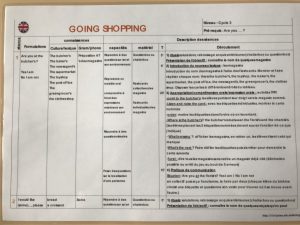 and plan lessons around the topic of ‘going shopping’. I am going to be teaching this topic to the CM2 class later on in the week and the teacher was eager for me to plan various lessons around the topic to show her before I taught them. Having time on Tuesday morning was very helpful as I had the chance to look at the various resources that were available to me. I was able to translate the various phrases I would be using in English into French in case the children had difficulty understanding. CM2 is the oldest class in the school, therefore, they should have the best level of English in the school. Having spent a lot of time in CP now I have a greater understanding of how English is taught throughout the various stages of school. This has allowed me to plan successful as I have had the opportunity to watch other teachers teach the subject.

The CM2 class teacher Amélie was on a course on this day, therefore, the children had a supply teacher. It was interesting to see how the children would behave with a teacher they had never had before. This was not their usual supply teacher. At the start of the day the teacher asked the children to write their names on pieces of paper so that she would be able to call them by name. Most of the children did this, however, there was one child that thought it would be funny to write a different name. He was soon found out, and the class seemed to find it very funny. This showed me that no matter what country, or class you are in children always try to be funny and test boundaries with teachers that did not know them. Since I have been in their class for three weeks now, when I begin to teach them English I know that they will behave for me as they do with their normal teacher as I am aware of the structure of their day.

Watching the children with the supply teacher made me consider the approach that I must take when teaching the class. They are very well-behaved class, however, there are members of the class that like to have a joke from time to time and can be distracting. The school and classroom don’t have specific behaviour management strategies like most Scottish primary schools do. This makes it more difficult to implement them here. On my previous university placement, I adopted various behaviour management strategies from the class teacher as it was a proven way of addressing misbehaviour. This means that it will be very much trial and error with this class, using various strategies (if required) to see what works best. I am hopefully that I will be given the same respect that the give to their class teacher. 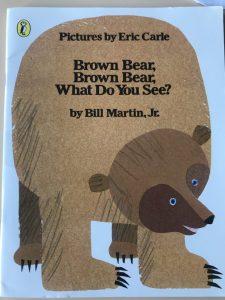 My first CP class of the day was very difficult, they were restless and did not listen to instructions well. I found myself getting frustrated as I kept telling them to listen and be quiet, but they did not stop. The teacher had to step in at one point to tell them off because of how restless they were. I also found that this had an effect on their learning. Because they weren’t listening to me as much as they should have been, there were not able to recall the information I was giving them. I read a different book this week and they found it very funny because it was called “What colour are your knickers”. This allowed me to realise that children that of CP age (6 and 7) are not mature enough to read a book like that. The nature of the book distracted from the topic. This meant that the lesson was not as successful as it could have and should have been. I just hoped that the CP classes after lunch would respond well to the lesson and engage without becoming restless and misbehaving.

After lunch I taught the other two CP classes the same lesson. I was worried going into these lessons due to the way in which the first class had acted. However, I was pleasantly surprised to find that the other CP classes were engaged throughout the course of the lesson. I extended the lesson because I had more teaching time. I allowed the children to become more involved in their lesson. I picked various pupils that were sitting nicely and listening to come and stand at the front of the classroom, while the other children described what colours they were wearing. The children responded very well to this part of the lesson as they felt as though they had an important role to play. I also found that the other CP classes were a lot more confident with their colours than the first class. This shows that the classes that stay engaged and are well behaved find it easier to recall information from previous lessons.

Moving forward I believe it is important to determine what behaviour management strategies are effective in the CP classrooms. Since the teachers don’t implement set strategies it is my responsibility to use my own and see what works for the individual class. This will ensure that the children are getting the most out of the English lessons.