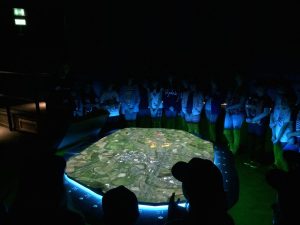 P6/7 of every school from Islay and Jura went on a stirling trip. On the first day of being in Stirling they went to Stirling castle and Bannockburn. We visited Bannockburn because a famous battle happened there. The battle was between King Edward the second of England and Robert the Bruce. Robert the Bruce defeated King Edward the second. We visited the site of the battle and stood in the same spot that Robert the Bruce had put his sword through a rock. We found out a lot about the battle like it took place on the 23rd june 1314, it was Robert the Bruce against King Edward the second of England. There was a 3D place where we had to wear 3D glasses, the glasses made the battle look realistic. It was actually just a screen with videos of what the battle would have looked like. I stood in front of an arrow as it was being shot and it went through my head. I also got shot in the arm and the leg. There was also famous people from the battle from the English side and the Scottish side. To work the people you would stand on a grey metal plate that was in front of them then they would start talking to you. Then you could wave your hand and find out more information like where they lived, what weapons they used and who they were. After that we played a battle game where we all got split into two teams and had to fight against each other. One team was the Scottish and one team was the English. We would take it in turns and if we were an archer we could shoot move or attack. The English were trying to reach Stirling castle and the Scottish had to stop them. I was in the Scottish team and the Scottish team won. We had a great time and hope to visit again.