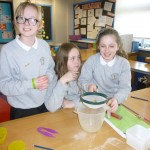 P7 have been doing a lot of science lately for there topic about water.  They have been learning some very good scientific words.  They have been doing experiments using evaporation. Evaporation means a change from liquid to steam or vapour.  They recently did an experiment to make clean water when they put vinegar, flour, sugar, baking soda and water in a cup and mixed it. Then we cut a big bottle in half and placing the cup in the bottom half and placed the top half on and the water in it would turn to steam and go to the side of the bottle and run down to the bottle and sit at the bottom as pure water. They also did another experiment when you put sand, water, bicarbonate of soda and vinegar in a tub and put a cup that is lower than the rim.  Then you cover it in cling film tightly and tape it, then put a small rock above the cup and it will evaporate.  They are all enjoying this topic so far and love the experiments they did.