Conspiracies as Neil Lennon rejoins Celtic FC on the hunt for ten in a row. 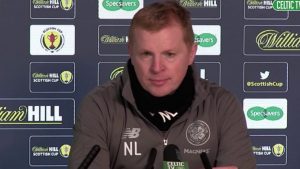 When Neil Lennon went to Celtic FC to replace Brendan Rodgers, it was told that he would only be there until the Summer, but now people are wondering if he will stay for ten in a row, as he was the manager that started it in the first place. Neil Lennon has many targets as Celtic FC manager as he is willing to win the treble and he may stay for the next two seasons to win ten in a row.

Although most people might think that this could be a challenge for Neil Lennon, he seems to be pretty confident by saying this:

“I am returning to one of the biggest and best clubs in world football and I can’t wait to get started.”

Neil Lennon has made an impact on the club by winning his first two games as a returning manager at the capital where his former team Hibernian were located, one against Hearts which he won 2-1 and another against Hibernian which he won 2-0. Celtic players are also confident in Neil Lennon’s return, including Scott Brown who said this:

Neil Lennon will face some challenges while manager at Celtic such as his first old firm game which is coming up on the 31st of March, winning the treble, possibly going far in European football next season and trying to achieve ten in a row. Another challenge will be living up to the success he brought to the club last time he was there when he got Celtic to the round of 16 in the Champions League then lost 5-0 on aggregate. Obviously he will want to achieve that again no matter how difficult the challenge, although he might focus on winning the league to get the time one step closer to 10 in a row.