Before our school’s awards ceremony we had the privilege of spending five minutes with Magnus MacFarlane-Barrow and his wife Julie, finding out more about his truly remarkable charity, Mary’s Meals. 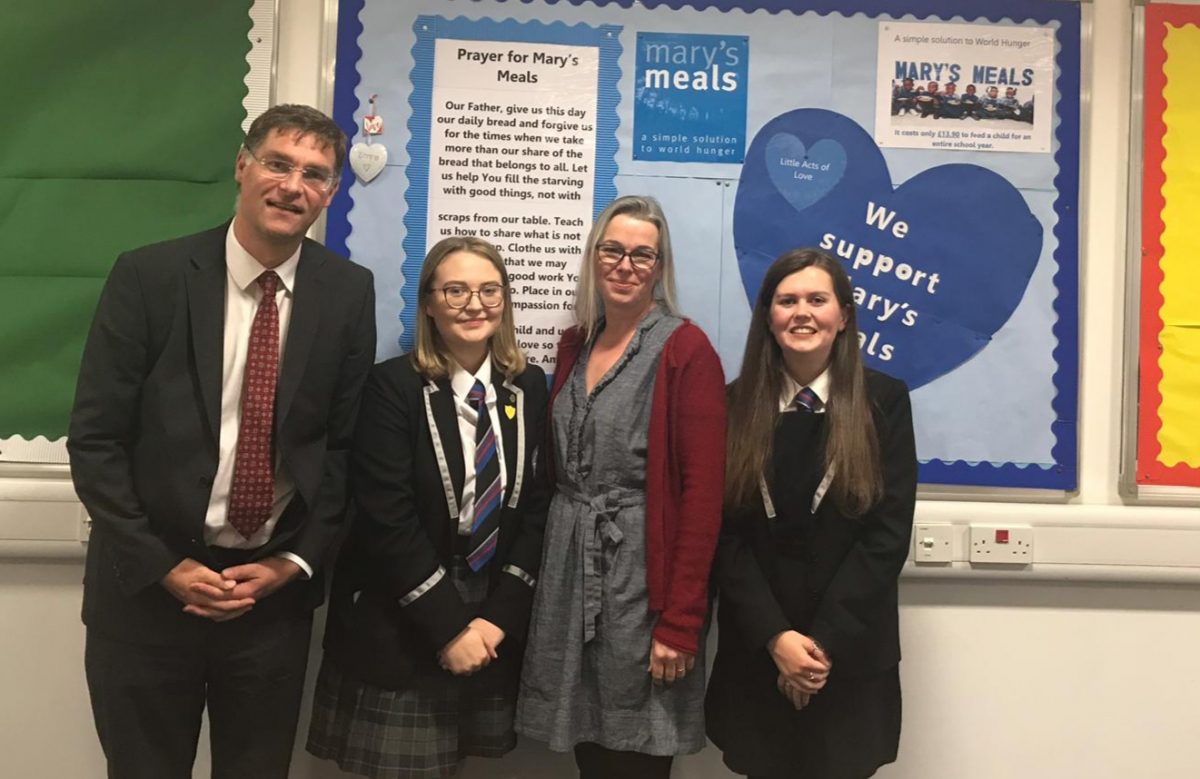 Mary’s Meals was founded in 2002 by Magnus MacFarlane-Barrow, with the belief that that ‘every child should receive a nutritious daily meal in their place of education’. Back in 2002, Magnus set out for Malawi to bring aid people in desperate need due to the famine which had swept the nation. On his journey, he met Emma, a terminally ill woman who was distraught at the thought of what would happen to her children after her death. During this encounter, Magnus asked her eldest son, Edward, what he hoped for in life, and he replied, ‘I want to have enough food to eat and to go to school one day’. These words resonated with Magnus and helped inspire his journey with Mary’s Meals. Edward’s word were his motivation behind Mary’s Meals, a phenomenal charity which is currently responsible for feeding more than 1.4 million of the world’s most impoverished children every school day across 18 countries.

I had the pleasure of meeting Magnus and his wife Julie shortly before our school’s awards ceremony, and they were truly amazing. I was inspired by their passion, commitment and enthusiasm for Mary’s Meals, but above all else, it was their serene and gentle manner which struck me most. Both Magnus and Julie were keen to focus and praise our school for our involvement with Mary’s Meals and brushed aside any sort of praise or recognition I attempted to offer. Magnus’ reply to any accolade was that the charity “was not about him” but about a whole host of people “doing little things” and engaging in “little acts of love”. Despite his protestations, the fact is that over 1 million children are being fed every single day because of this beautiful couple, their hard work, their dedication and their commitment to changing the lives of others. I feel so privileged to have met them.

Who inspires you daily to continue with Mary’s Meals and make such a big difference?

Do you feel a lot of pressure from the immense responsibility of providing possibly the only meal that a child will have a day?

No, not really because it is not my responsibility I’m just doing my bit like everyone else, like everyone involved in Mary’s Meals so this is my bit and it doesn’t depend on me and it belongs to God. If I thought it depended on me then i probably wouldn’t ever get to sleep at night, (He replied with a laugh).

Is there an experience or a particular person that stands out for you, that has inspired you from this journey?

There is lots, some you may have heard me mention before Jimmy in Haiti is an inspiration to us, a young man, a famous singer who went to school. (Jimmy visited St Andrew’s and St Bride’s in 2017) He is a real inspiration for all of us.

Have you always been involved in charity work before Mary’s Meals became part of your life?

Julie replied: No, not really. At school I was a little involved. I went to a catholic primary school and we had the Holy Childhood Society and that was my first introduction to charity. We would do lots of little things. .

How does it feel when you are recognised for all of the work you have done in the form of awards, for example in Time Magazine you were voted in the top 100 most influential people in the world?

It is kind of funny, especially when I hear that one especially because when they phoned me to tell me I said ‘I’m not even the most influential person in my own house’ which is how I feel, I do feel a little bit embarrassed, a little bit awkward because again it is not about me but I’ve kind of understand a little bit better now about awards that they are not for me they are for Mary’s Meals and every time there is an award it is another beautiful recognition of how special Mary’s Meals is and it’s another opportunity to tell  more people about Mary’s Meals.

Which country is your biggest contributor, with both donations and volunteers?

In terms of donations Scotland is still the biggest by far. But in terms of volunteers would be in Malawi, 85,000 volunteers there.

How important is it to yourself and the charity that our school gets involved?

Julie: Hugely. You are the reason why Mary’s Meals can feed all the children that it feeds I think there is something particularly beautiful about children helping children and it is very much in the spirit of Mary’s Meals, and so schools are hugely important. The most important people in the Mary’s Meals family are children, children here and children abroad.

And for us women, How has your wife influenced your decisions?

She has been a huge influence. I definitely wouldn’t be doing this work if it wasn’t for Julie. We have kind of been doing this together since we first met. We have obviously been in it together from the very beginning and we both always talk about it: what is going on, what we can do. So, yes, she’s been a massive influence. I couldn’t really exaggerated her influence.

What do you think the UK government should do in order to tackle poverty in our own communities?

I probably don’t want to say too much about that because, for us, it is really important that Mary’s Meals doesn’t become a political organisation. We stay clear from any political comments. But of course we want a government to care for the most vulnerable people in society, that looks out for them and introduce policies that tackle everything from homelessness to extreme poverty in this country. But I wouldn’t want to say too much more than that.

Why is it important for you to source food locally when providing these essential meals?

On one level it is about the economy, helping the economies improve because the money that we are raising is stays in that community, rather than us buying food and the money going somewhere else. But it is more fundamental than that: it is about local ownership and we want the community to be owned locally, we want one day for them to work without needing us and sourcing food locally is a big part of that model.

Did you ever imagine that the charity would get to this level, are grow to be this big?

In some ways, absolutely not. We didn’t have a clear idea about anything – certainly when we set out to work together in Bosnia, we certainly didn’t think it was going to go this big. To be honest, fairly early on in Mary’s Meals with the simple things that were going on, our vision grew and we began asking, ‘why isn’t this happening for every child in the world and ‘why would any child be hungry?’ So what has happened is amazing but we never take any of this work for granted. This work keeps growing, and every day is a surprise in many ways but at the same time we feel that this work needs to keep growing.

And all of a sudden, my five minutes were up! Inspired yet simultaneously gutted that my time with them had ended. I left with a feeling I had never experienced before. Sometimes you meet people who make you feel good, who leave a mark, who leave an impression, but Julie and Magnus did much more than that. In a mere five minutes they showed me the joy in giving and the delight in sharing. They are an inspiration to us all, teaching us all to help one another and reach out to the people in need.