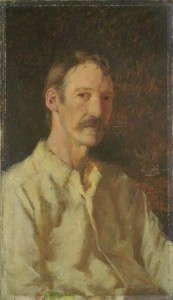 Robert Louis Stevenson was one of the most famous Scottish writers of the 19th century, perhaps his best known works being Treasure Island, Dr. Jekyll and Mr Hyde, and The Body Snatcher.

Robert Louis Balfour Stevenson was born on November 13 1850 in Edinburgh to parents Thomas Stevenson and Margaret Balfour. The Stevenson family were already well known as Thomas and his father, Robert Stevenson, were both famous lighthouse designers and engineers. From them, Robert Louis inherited his adventurous nature that would stimulate his imagination and spark his interest in literature. As a child Robert was severely ill due to a weakness in his lungs which he inherited from his mother. His health improved with age and after a troublesome time at Edinburgh Academy he entered Edinburgh University at the age of seventeen. Lacking the necessary approach for engineering, he instead pursued law and was called to the bar at twenty-five. This was a reserve plan to fall back on should his true passion – literature – fail. 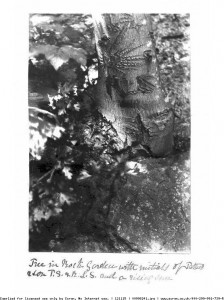 A man who saw great romance and art in all aspects of life, Stevenson decided to travel. This was most likely in search of better health but also for adventure. As a writer, he craved stimulation for his imagination and he created notes of all he saw. His travels took him to Grez-Doiceau, Belgium and France where he visited Nemours and Paris often. A canoe trip in 1878 inspired his travelogue An Inland Voyage and later Travels with a Donkey in the Cevennes. He also wrote a number of articles and essays to generate income. Two years before this, he had met Fanny Vandegrift Osbourne, an American divorcee, in France and fallen in love. A few months later she returned home and fell ill. When the news reached him, Stevenson, against the advice of his friends, departed for San Francisco. The journey from New York to California almost killed him. However, it inspired his works An Amateur Immigrant and Across the Plains. He eventually arrived in San Francisco with scarcely any money at all. By the end of winter 1879 his health declined once more. Fanny nursed him back to health.

In May 1880 he and Fanny married. They would spend the next seven years seeking a suitable environment for his ever declining health. Having suffered so terribly in winter during his life, they would reside in Scotland and England during the warmer months, and spend winters in France . His greatest works were created in this period: Treasure Island, The Strange case of Dr. Jekyll and Mr Hyde, and Kidnapped. He also published two volumes of poetry: A Child’s Garden of Verses and Underwoods. Stevenson’s father died in 1887. In June 1888 Stevenson chartered the yacht Casco and he and his family sailed around various locations. This period also saw the production of further work including: The Master of Ballantrae, The Bottle Imp and The South Seas.

In 1890 Stevenson and his family mo 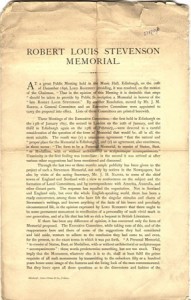 ved to the Samoan island of Upolu where he would live out his final years. He named his estate Vailima, meaning “Five Rivers”. His literary work and reputation was influential and the locals would consult him for advice. They named him the Tusitala – the Teller of Tales. His interaction with the locals led him to observe that European rule was less than benevolent and he published the highly critical A Footnote on History. Given his literary power, his work caused two officials to be recalled. As well as supporting the natives and building his estate, Stevenson published further works such as David Balfour and Ebb Tide. He also wrote the Vailima Letters in this period. With his health waning, Stevenson became depressed and concerned that his creativity was being exhausted. His spirit refused to succumb and he began his masterpiece, the Weir of Hermiston. He apparently remarked: “It’s so good that it frightens me.” He would not complete it. On December 3 1894, after working on his book, Stevenson collapsed in the company of his wife. He was 44 when he died as a result of a cerebral haemorrhage. The natives surrounded his body and carried their Tusitala upon their shoulders to a cliff top where he was buried.