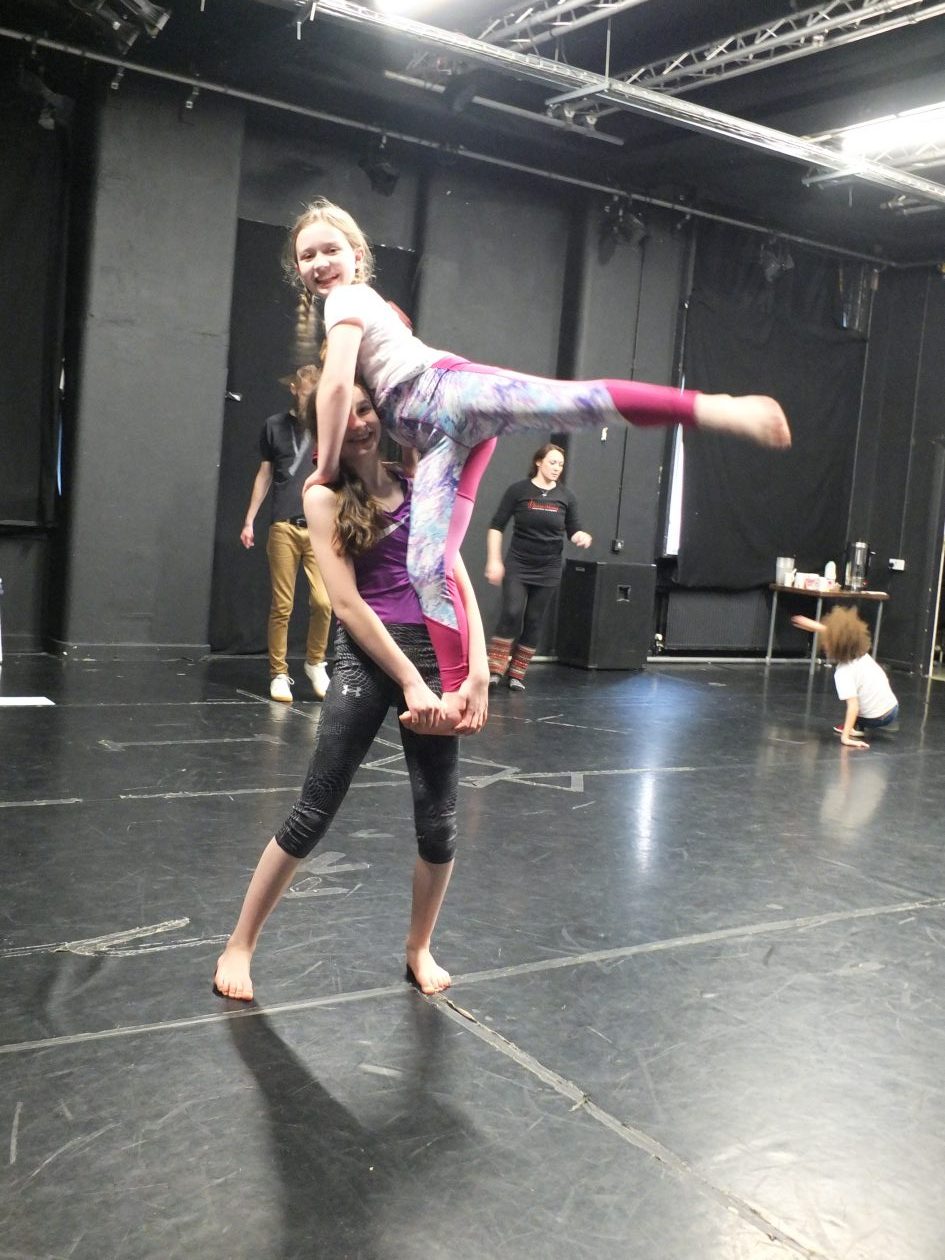 In early November 2020, Edinburgh hosted a creative workshop in which children (and their adults) experienced the potential of dance for language learning. The workshop was based on the idea of kinetic reading, a technique that blends movement and learning, developed by the professional dancer and choreographer Zoë Leigh Gadd.

During the workshop, participants were led by Zoë through a variety of contemporary dance techniques, movement exercises, words games and poetry in both English and other languages spoken in Scotland. They learnt the ‘Alphabet of Movement’ and explored the poems through dance. 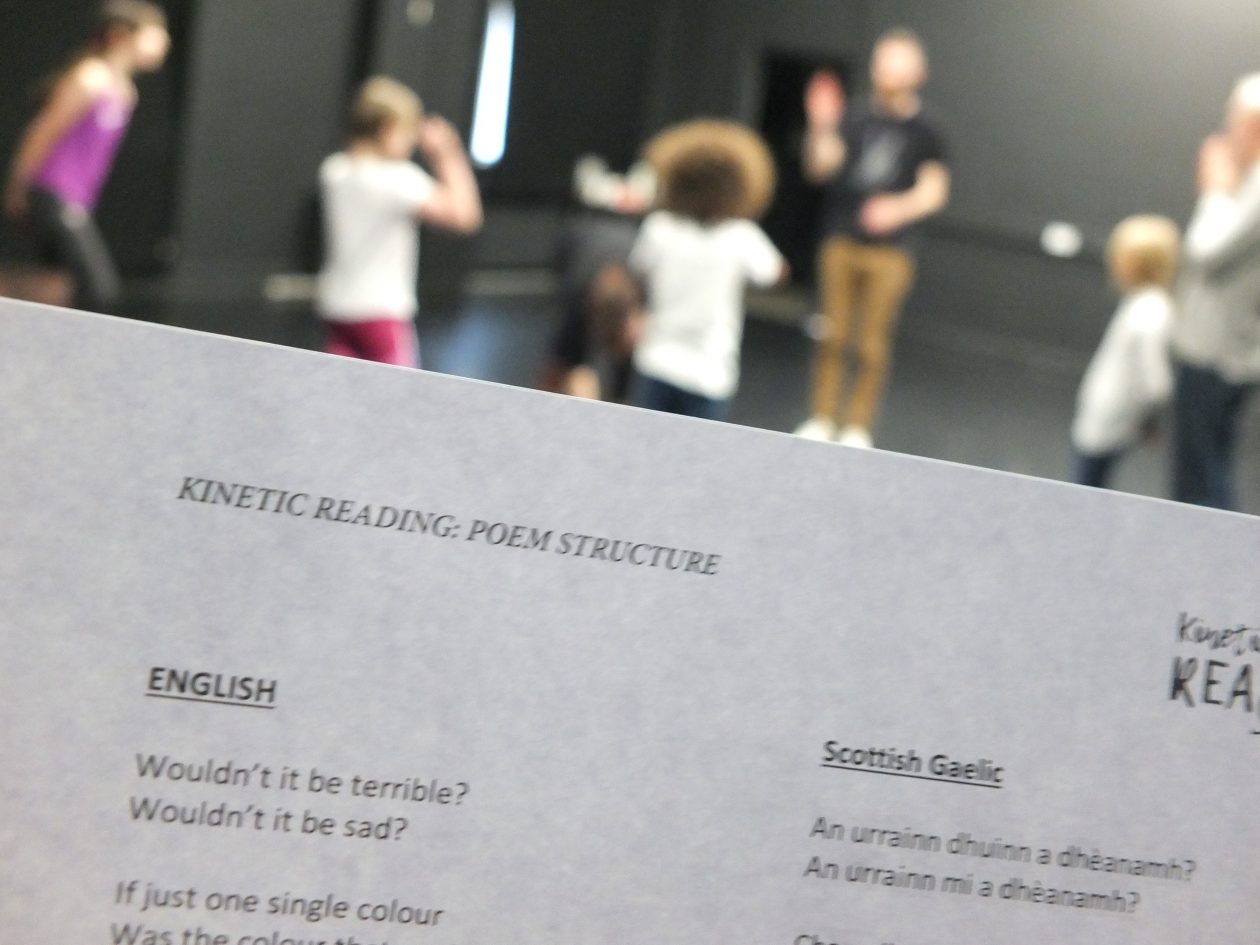 These movement-based approaches to language learning involved a lot of clapping, stretching and jumping, included creative kinetic explorations of one’s names and led to the highly inventive ‘Body Conversations’ explored by children with great enthusiasm, including over lunch and coffee break. The final performance in which participants danced the poem was mesmerising. It was fascinating to watch how the words look when they move and speak through the bodies, even when the bodies were following the wrong hand and the chin or a leg did not listen at all. The motivation was super high, and it was a good workout too – mentally and physically stretching. What’s more, the memory of the exercises and connected to them words lasted long after the event.

On November 2nd, 2019, we organised two public events dedicated to parents and children from multilingual families. This is where our new friend, Urcus, had the opportunity to meet young language users who were both very creative and interested in learning languages!

We were very grateful to our collaborators, The Mitchell Library and the Bridgeton Library, that opened up library spaces for us to meet and have fun. The activities we prepared were developed in collaboration with two creative artists, Elina Karadzhova and Paria Goodarzi, who took the idea of translanguaging and transposed it in new activities, modes and media.  Two students studying in the TESOL programme at the University of Glasgow joined the team and engaged with our participants. The activities we used are very easy to set up and useful for both classroom settings and community projects. For this reason, we will add them to the Toolkit. We also include some photos from the event to share with you the spirit of our language encounters! 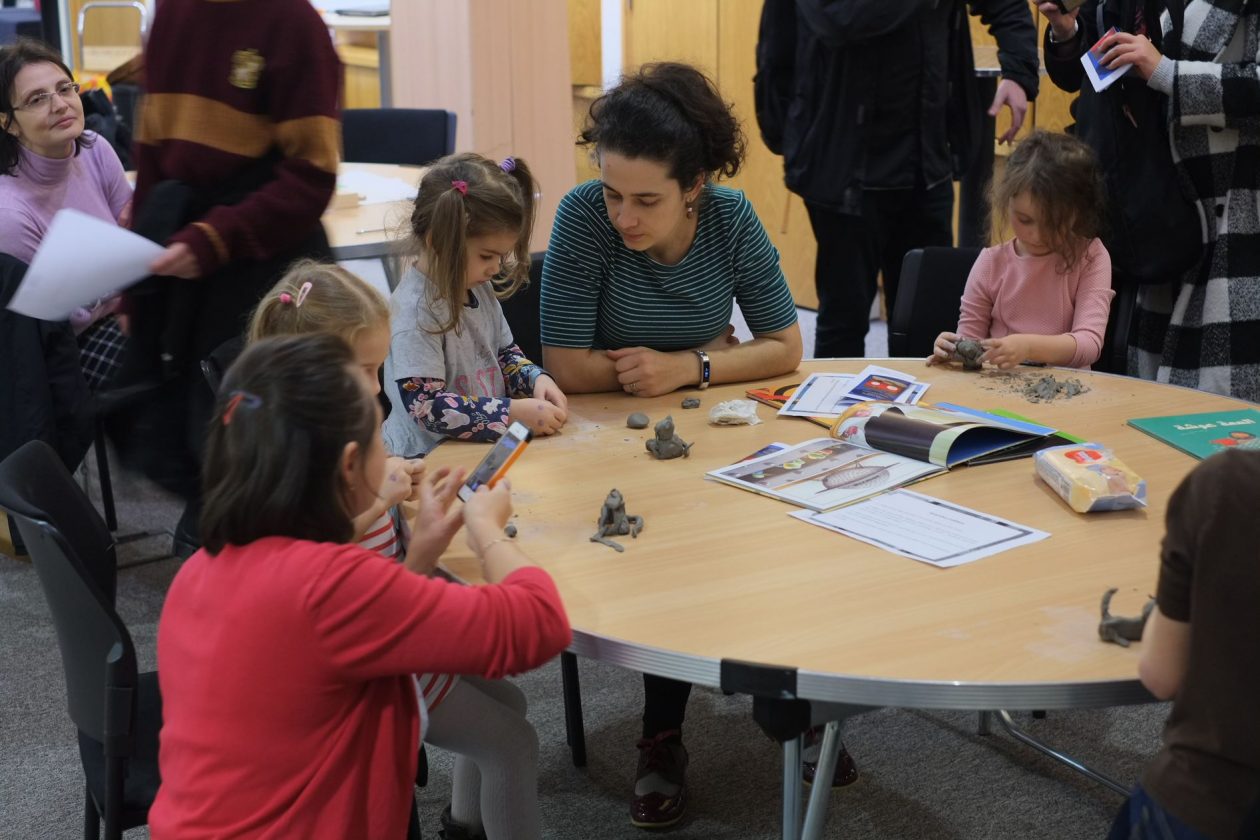 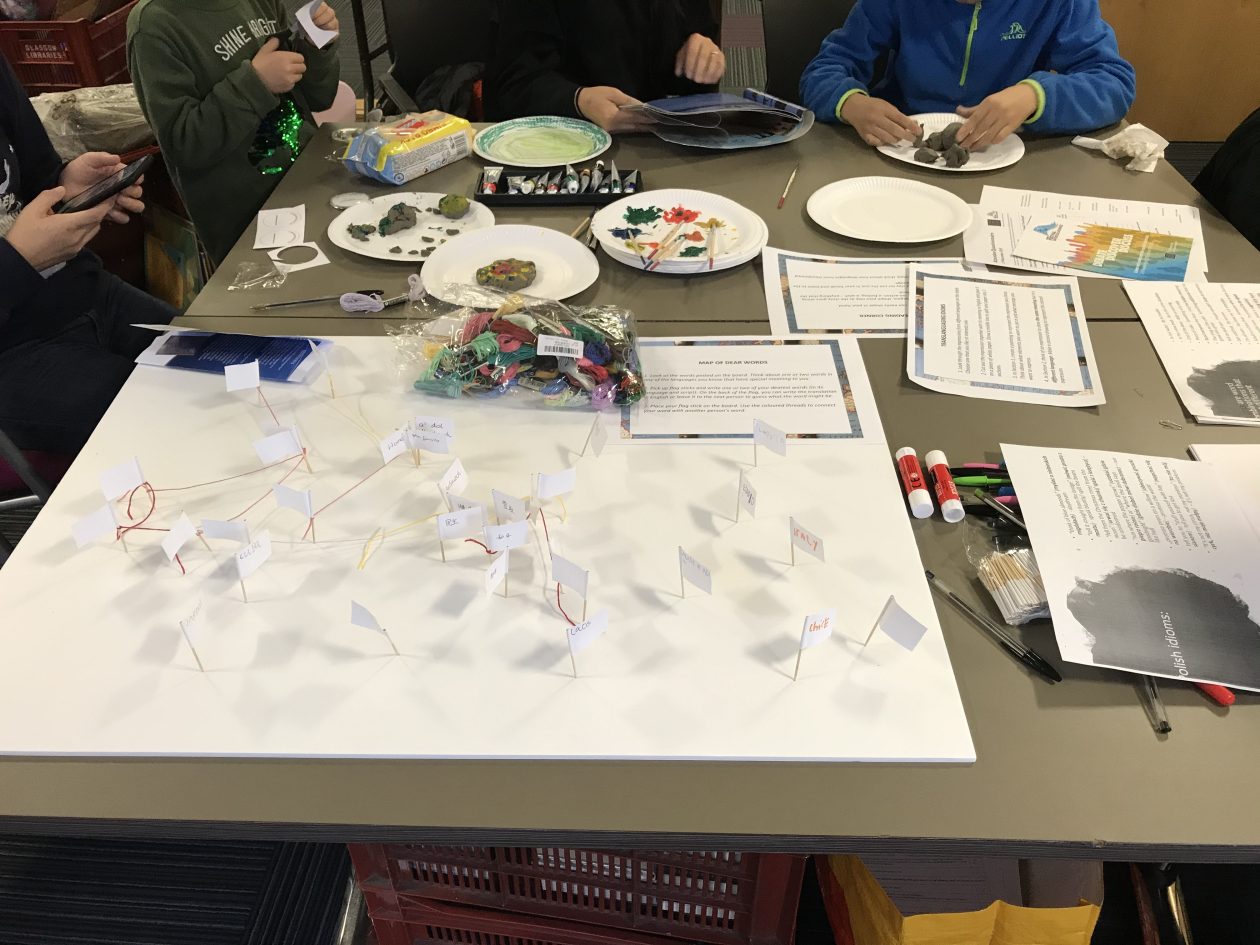 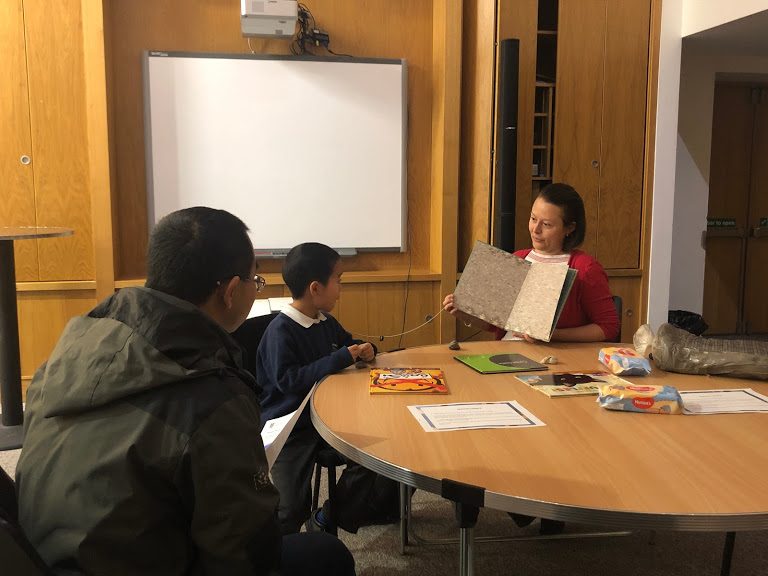 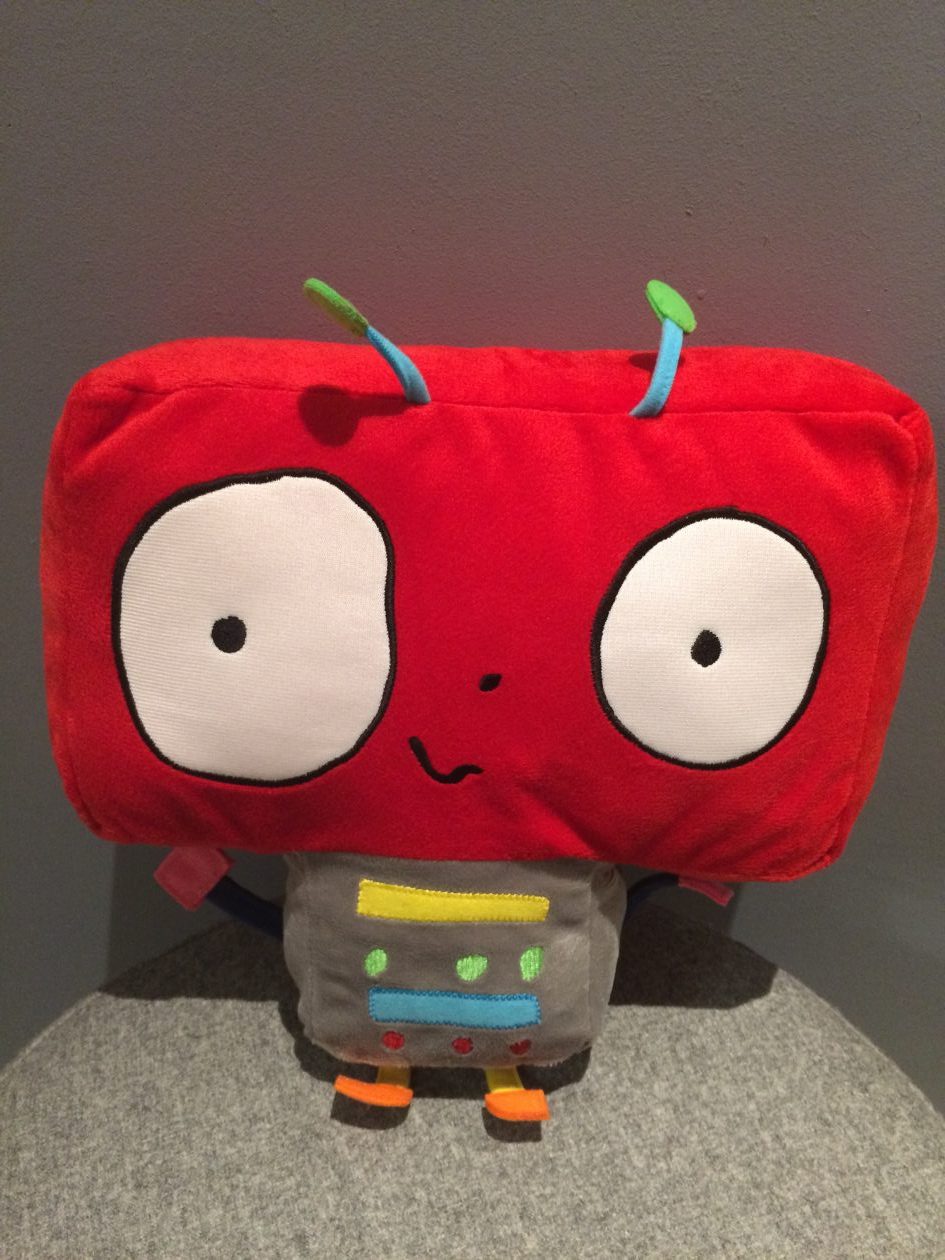 URCUS is our newest team member and he loves to chat about TRANSLANGUAGING. Urcus invites families and young people to a fun free event on November 2nd, 2019, from 10:00 a.m. – 2:00 p.m. in two locations in Glasgow: the Bridgeton Library and the Mitchell Library. If you want to know more about the event, please visit our event page.

Our creative team have prepared many activities where you can explore languages, learn about translanguaging and have fun being creative. We will post these activities in our Toolkit shortly after the event so do plan to revisit our site!

The other good news is that each young person will leave the event with a goody bag and their “Language Inventor” badge. Join us and if you have any questions, feel free to contact us at Lavinia.Hirsu@glasgow.ac.uk.

This event is supported by the ESRC Festival of Social Science. #ESRCFestival

Starting with this school year (2019-2020), the Mitchell Library will be hosting five suitcases that contain the Toolkit that we have developed. The materials created during the CPD project, which are also available online under the Toolkit tab,  now have a physical form. The suitcases include activities and instructions for working with pupils in multilingual contexts. The materials can also be adapted to other contexts and, in fact, we like to believe that they can be used as a springboard for other creative activities that you can develop in your own contexts. Additional materials, such as books, blocks and the conductor’s spot, accompany the Toolkit to facilitate the activities. The suitcases can be checked out each term via the School Library Outreach Unit, and we highly encourage you to take advantage of their many resources! 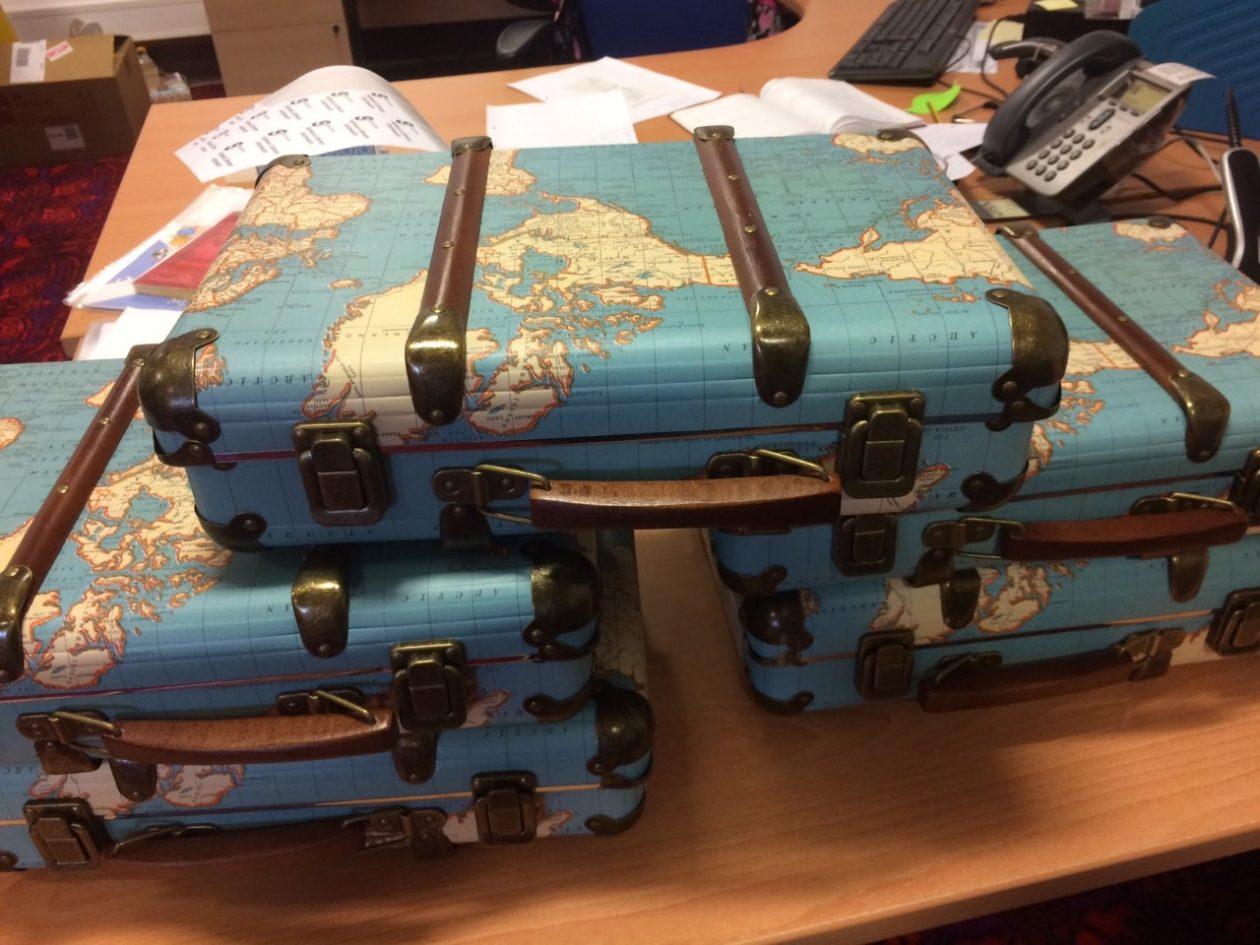 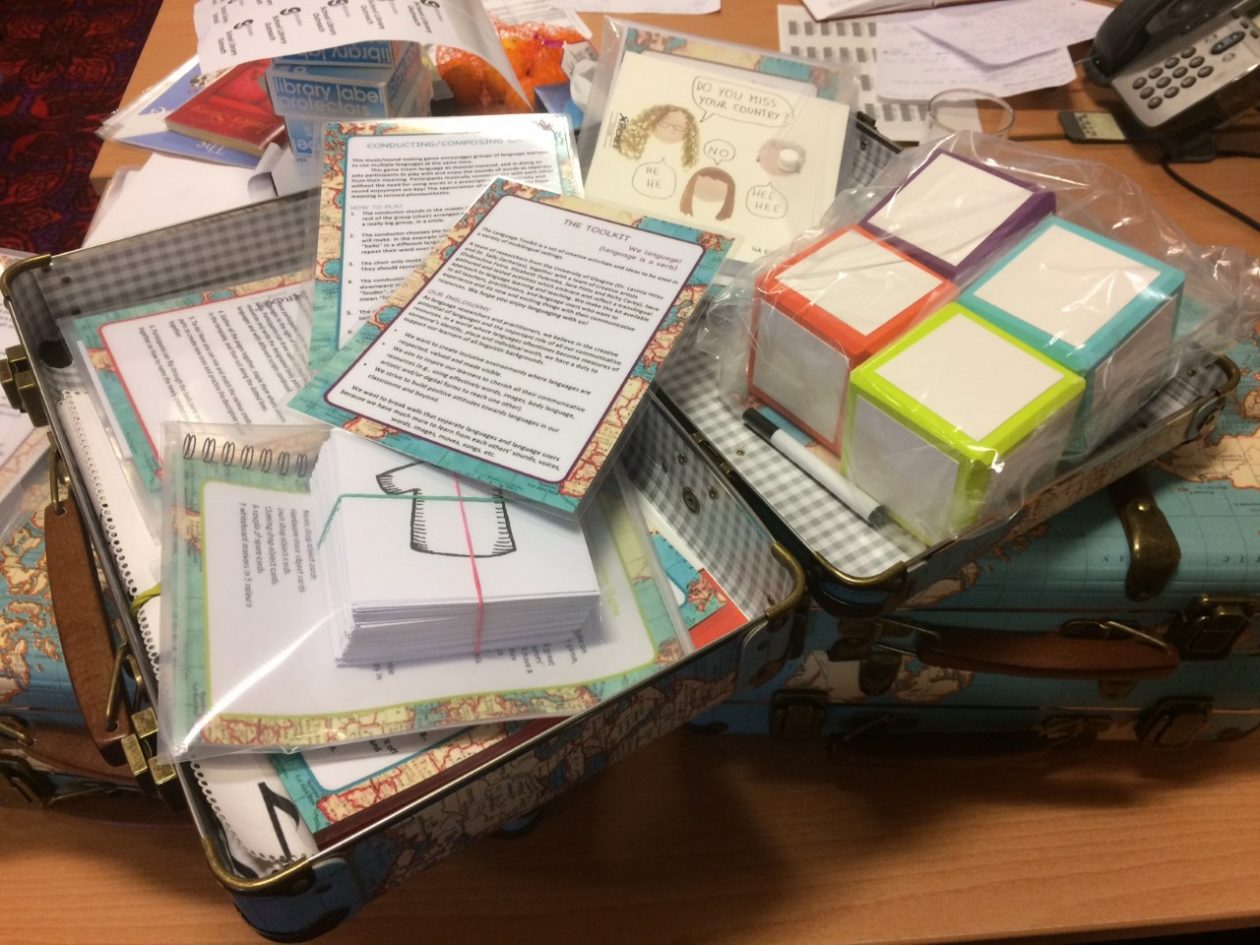 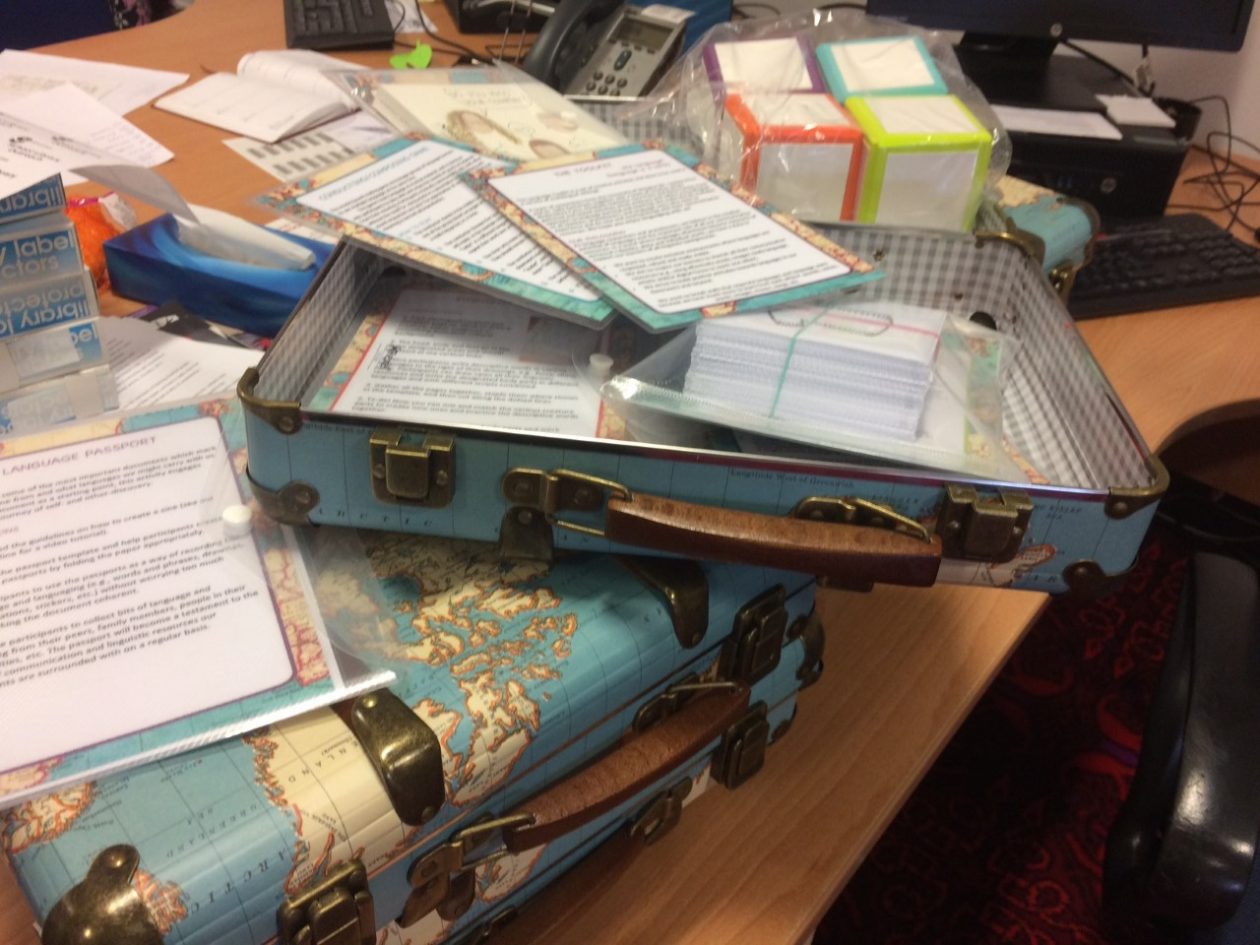 This translanguaging project revolves around pupils’ active use of many different media/ languages to construct their understanding and daily learning.

The pupils in this project were in Secondary 1 and were mostly new to English; and were also recent arrivals. I also kept in mind some of the pupils’ prior limited educational experience.

To introduce creative writing to the children, I had them explore common children’s poems / nursery rhymes in their first language, e.g. Romanian, Slovak, Urdu and Arabic. Reading through them gave the students ideas about the constructions of a poem and the language/ vocabulary used. They also shared their poems with the class by translating for their fellow classmates. Whilst translating, when they came across words they did not know in English, they were prompted by peers with a closely related language as to what exactly they wanted to say. Since the Romanian and Slovak languages have commonalities and have some similar vocabulary, it was possible for speakers of different languages to interact with each other and provide input as to what the other speaker meant to say.

Once they understood the concept and what was being asked of them, themes were talked of, brainstorming ideas such as: family, friends, love, school, life in general, and nature etc. A couple of brief examples were given.

Once their poems were completed in their first language, they were given opportunities to read out in class for the rest of the pupils, which allowed them to ‘fine-tune’ any changes through queries from peers; and this was the intended outcome. This exercise was also designed to build their confidence for recording as part of gathering evidence of the project.

However, once their poems were completed in their first language, the next challenge was getting these translated. The poems could have been translated by the schools interpreters, but this was avoided in order to leave the credit to the pupils. However, help from the interpreters was sought for single words and the interpreters performed a quick read of the poems to make sure that they were mostly legible.

The following stage was the recording, which at the beginning of the project was rejected by the pupils. However, after some discussion they agreed to use a puppet to support them whilst reading out their poems. For the recording the pupils were fully involved. The ‘Green Screen’ app was used. Pupils chose their favourite backgrounds which were used as their backdrops. They also recorded each other’s reading using an ipad.

The grammar in their poems, either in English or in their first language, is not always ‘correct’. However, to maintain authenticity and to keep as true as possible to their work and resources, it was decided not to correct the grammar too heavily.

The project boosted the pupils’ confidence, and maximised language learning opportunities from their peers and their families.

We would like to invite you to an afternoon of creative ideas, strategies and resources for multilingual contexts! If you work with pupils in a school context or language learners in a community context, you are welcome to join us!

A team of researchers from the University of Glasgow together with a team of creative artists and a group of teachers in Glasgow’s EAL Service have joined forces to develop activities and pedagogical ideas for working with languages through a translingual lens. With the support of the Glasgow’s EAL Service, we have developed a series of workshops where we exchanged ideas, created activities and trialled strategies in our own contexts. We are now happy to share these resources with you and we hope you will enjoy learning about our projects. The event will include a series of short presentations where you will be introduced to our free Language Kit and the creative resources that teachers in our group have developed as part of this project. Since the presentations will be practice-oriented, we hope that by the end of the event you will leave with many ideas to try in your own context. We also hope to learn from your own experiences and continue the conversation on how we can use our language resources creatively.

Details of this free event are as follows:

If you would like to attend please email UnitHeadEAL@gdss.glasgow.sch.uk or call 0141 582 0217

We look forward to seeing you there. 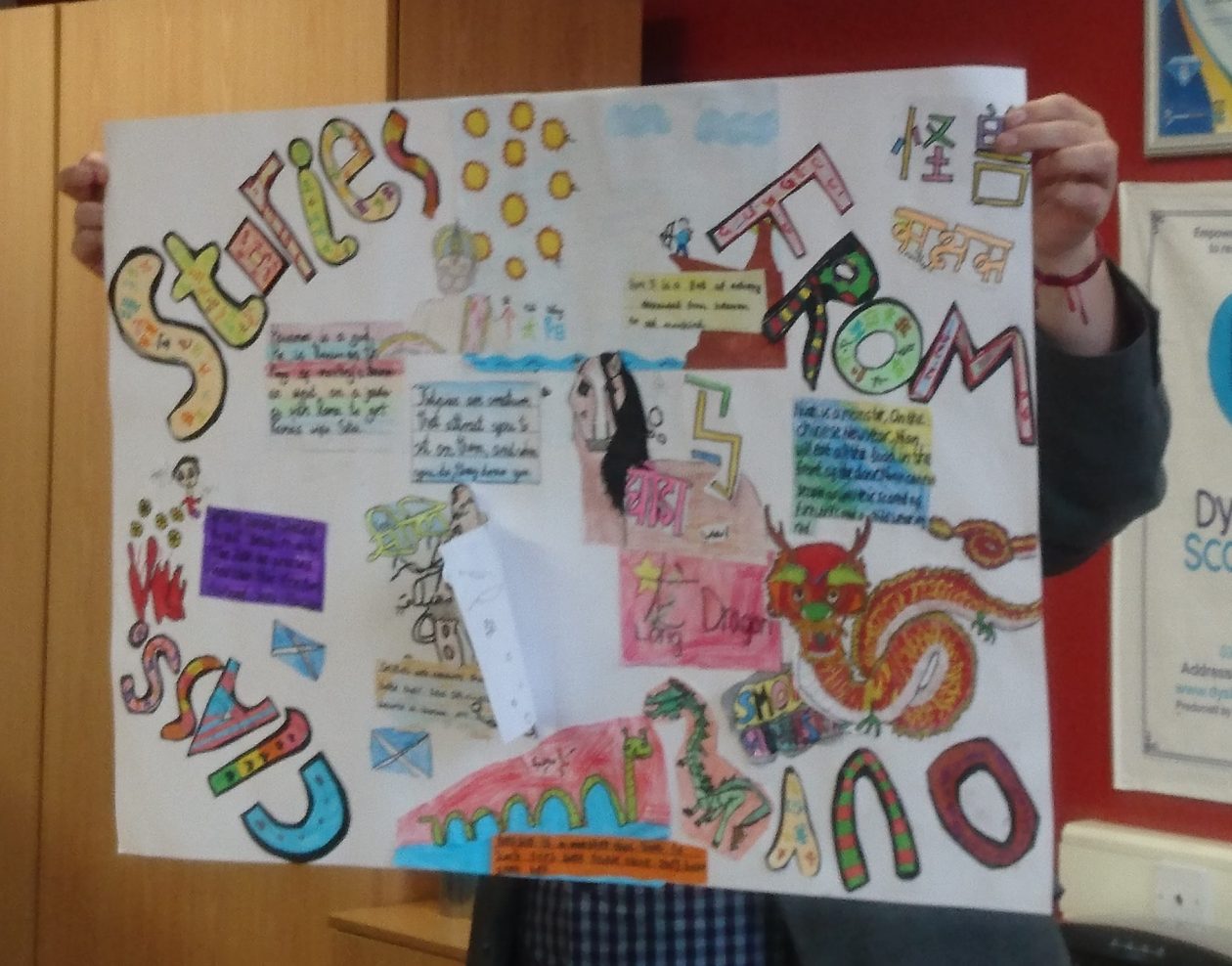 Our subsequent two workshops were devoted to the work developed in schools by teachers who worked with us as part of the project.  Inspired by the activities and discussions of translanguaging covered in the workshops they developed their own projects in schools.

During those two workshops, our absolutely fabulous team of EAL teachers presented their work-in-progress. They took us onto the amazing journey: along Victoria Road where students displayed their posters promoting healthy linguistic diet in shops, cafes and a library,  through the world of mythical creatures from various cultures and languages, in and out the spoken and written, multilingual and action-based storytelling in several schools to the digital performance of multilingual poems created,  performed and video-recorded  by students. It was a real treat! 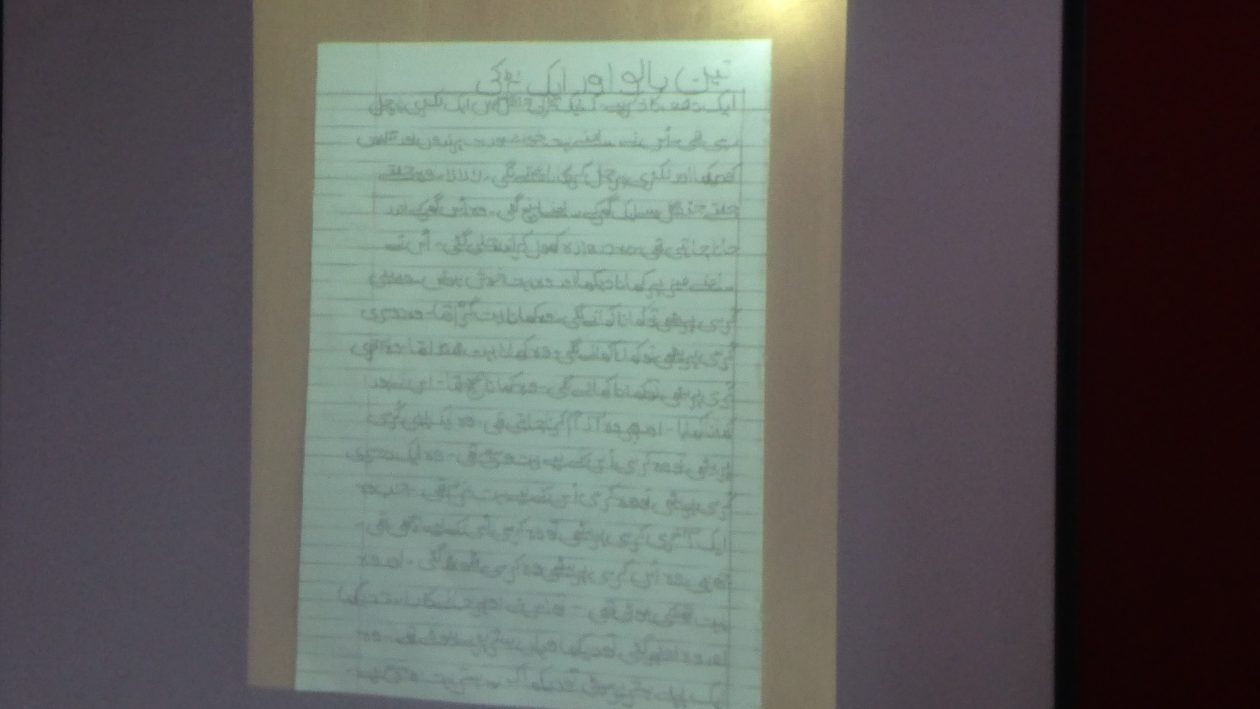 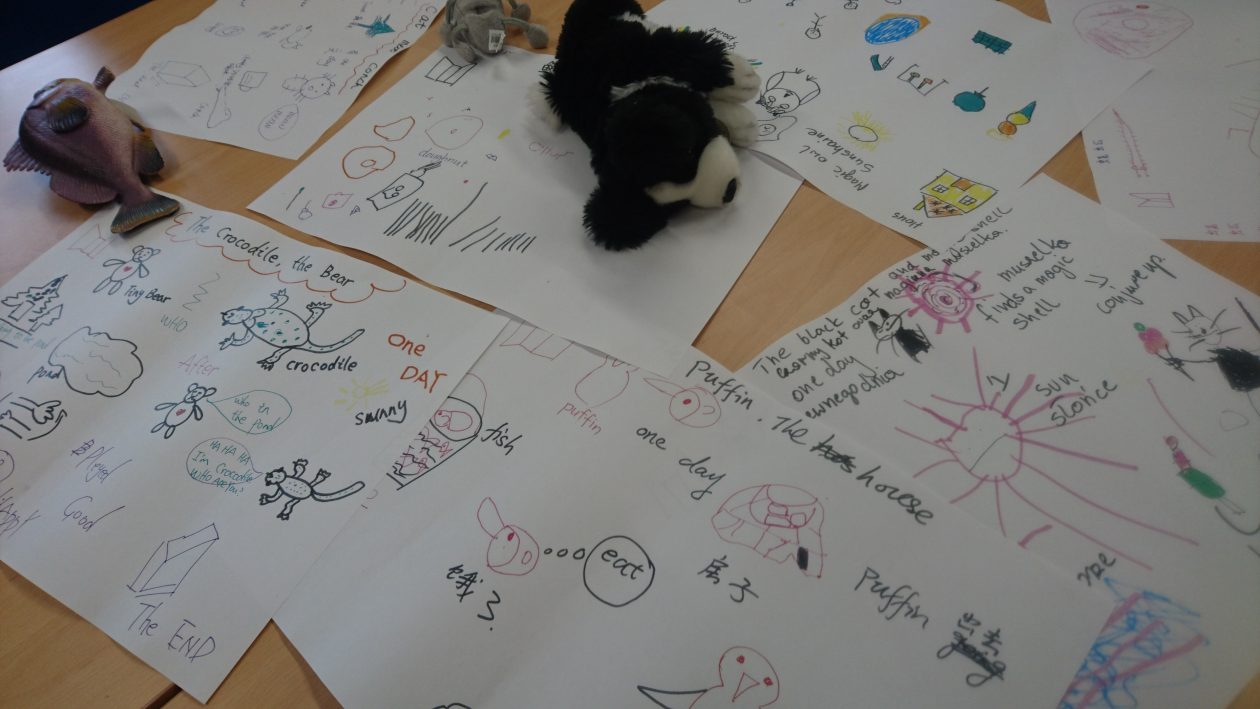 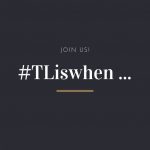 We are happy to launch the hashtag #TLiswhen (#Translanguaging is when….)! We invite you to share your stories with us on Twitter on

We hope that collectively we will discover the many forms and facets in which we language in different spaces, with different people and for lots of purposes. 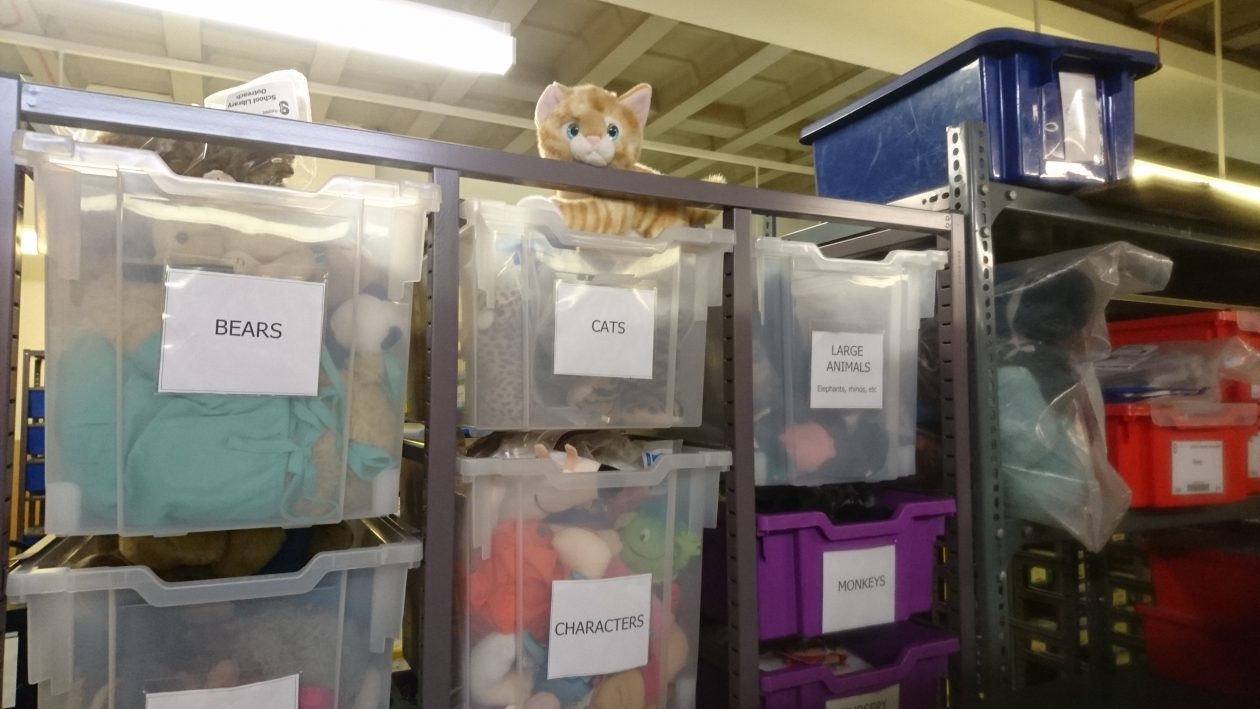 Resources we are creating as part of the Creative Language Practices project are to become available to schools through the Mitchell Library – with the help of the School Library Outreach team. To find out what it means in practice we visited the library and discovered a true gem: a huge room full of shelves and boxes with teaching resources on any subject you can dream about! 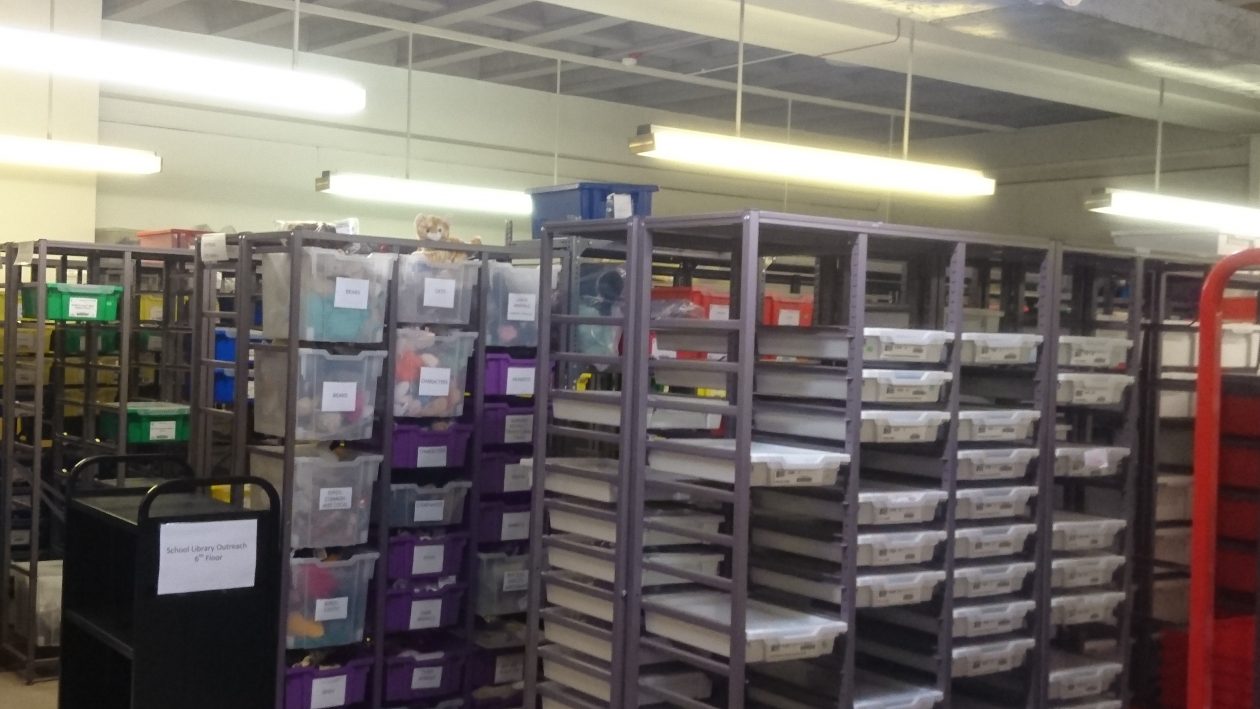 What was not there! Costumes, games, fluffy toys, stones, dinosaurs, objects from far away and from very close, and of course millions and trillions of books – including dual language books, books in Scots, Gaelic, Urdu, Arabic, Polish, Spanish, French, Italian, Hungarian… –  just to be borrowed and read.  The service is provided by the Mitchell Library to schools completely free of charge. For more details visit School Library Outreach or follow them on Twitter https://twitter.com/GlasgowSLO. 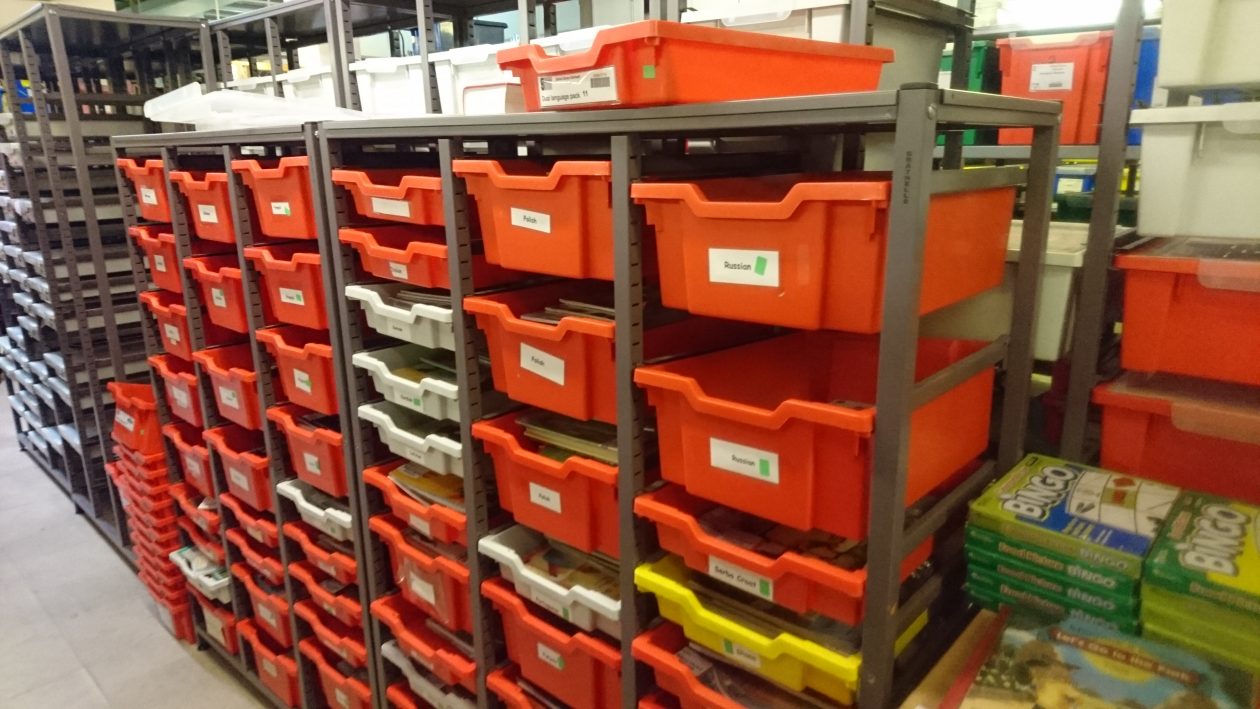 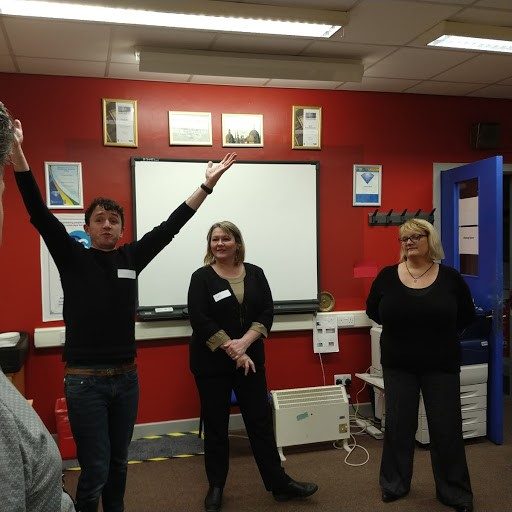 In the third workshop of the Creative Practices: Exploring Translanguaging Research in Pedagogical Contexts and Beyond project we learned how to use our bodies, voices and languages to make music. Richy, an an artist and a sound-maker, has shared with us his great experience built with various communities of children and adults. During the workshop, we collaborated playing Word Samba with our names and places of birth. We tested our skills in ordering a multilingual dish and we conducted and responded to others collaboratively making translanguaging music. Words don’t do justice to this activity that easily fills any space with voices in all languages, at higher and lower pitch, with each person sounding out bits of their languages. This is a great activity that can be easily adapted to a variety of contexts; after all, who doesn’t want to be a conductor?! We will soon make available more details on the activity, so you can follow our website for more Resources.