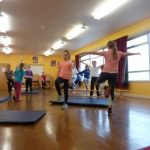 On Friday 17th March, Rhunahaorine and Gigha pupils joined pupils at Glenbarr Primary School for a day of BMT (Better Movers and Thinkers). They were joined by Rona Young who led the day. In the morning P1-3 pupils got the chance to have some Active Start together while the p4-7 took part in some BMT activities in the classroom. They tried a variety of activities – Body Lift, Body Parts, Finger Taps, Clap Patterns and Fours on the Spot. 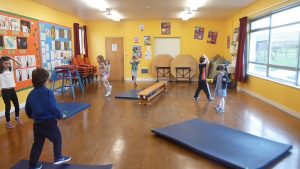 While doing these activities, pupils got the chance to work together and practice elements of numeracy and literacy e.g. counting, times tables and spelling. After this P4-7 had a team building challenge – who can build the tallest and strongest tower using only dried spaghetti and marshmallows! P1-3 pupils then went to the hall to work with Rona on some gymnastics activities using BMT. This was a great opportunity and showed how extra support and challenge could be easily added in.

Next p1-3 had the chance to take part in a team challenge while p4-7 got to experience some gymnastics. Throughout all of these activities, accuracy and precision was encouraged from all pupils and challenge was added in for those who needed it.

After having lunch and time outside together, all pupils took part in a dance session. Through this session, a variety of movements were developed pupils then worked in small groups to add in their own movement to a count of 12. The finale was a chance to take part in the dance which involved all movements and their own devised movements.

A great day was had by all pupils and it was a fantastic opportunity for staff to see how easy it is to use BMT in daily practice in the classroom and within PE lessons.