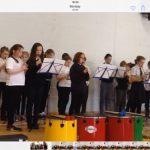 Pupils in Rockfield Primary in Oban welcomed parents, carers and friends to school recently to share with them the learning they have been doing in music.

P4 and P5 pupils have been exploring the instrument families of the orchestra, with a particular focus on the piece ‘Peter and the Wolf’ by Prokofiev which uses recurring themes and specific instruments for each character.

The children then explored a range of tuned and untuned percussion, and created musical sound picture stories based on Scottish folk tales to tie in their current IDL focus on Scotland. P4’s story was The Tale of the White Pet, while P4/5 performed the story of Bride and Angus and P5 retold the story of The Wee Bannock. 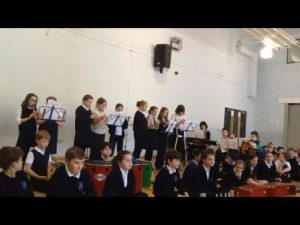 Pupils in P6, P6/7, P7 and P4-7G are learning penny whistle, and various classes as well as the Whistle Club performed a range of tunes. P6 had created its own accompaniment to a tune involving pupils who play other instruments, so we had piano, accordion, fiddle, recorder and guitar providing the backing arrangement for their performance!
Well done to everyone who performed and to all those who came along to the performance. We’re now looking forward to Oban’s Highlands and Islands Music and Dance Festival at the end of April!