We went on to the computers to do talking and listening active maths the games we played place value and number detective. Some tips for the place value game is to look at the units and make sure it is the same units then add on the right amount of tens. For the detective game you have to use the right questions, for example is it odd or even were the best to ask because they got rid of a lot of numbers. We enjoyed it.
By Robbie and Asher 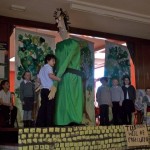 I am going to give you my review on The Selfish Giant. On the day of the play no one forgot their words and everyone’s acting was brilliant. I felt very nervous when I was just about to walk onto the stage because I had forgotten some words in dress rehearsal, but it was fine in the end.  We did have a down side to our play, just when everyone had sat down the person playing the giant became ill. Eleanor was very clever, she was the puppeteer for the giant and she stepped in at the last minute, even though she hadn’t learned all the words she seemed to know them.  There was only one time that Eleanor didn’t know what to say but Harry knew the words so that was a big help. Other than that the play was great and everyone enjoyed it and after the play all the mums, dads, grannys, grandpas were allowed to go up and have a cake that we made and a cup of tea.
By Maisie