While on placement within a primary 4 class last year, I created a story box b 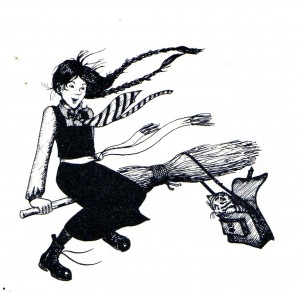 ased on the book ‘The Worst Witch’. When I was a child, I wasn’t a big fan of reading but instead read only when I was forced too by my teacher or parents. However, ‘The Worst Witch’ was one book I never had to be persuaded to read. Although I chose books for myself from the school library, they were often never looked at or even touched until it was time to return them. ‘The Worst Witch’ was different though. I found the book to be extremely enjoyable as a child and read it from beginning too end within a few nights – not something that I was seen to do. Due to my experience of the book, I chose it to base my story box around it for the class as I believed they’d love it too.

I started off by re-reading the book in order to help inspire me with ideas for activities that I wanted to have within the box. I also focused my attention on the topics the children were studying within each subject such as maths and literacy. I then started searching the internet for worksheets or activities which were linked to magic or witches. As they were learning about coordinates in maths, I managed to find a few different witch styled activates for varied abilities 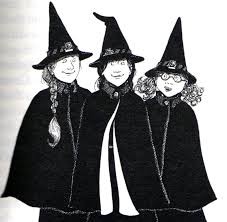 based on that topic. I also managed to find a witch’s position poem along with the lyrics to the school song that the girls sing within the book. As I was finding all these worksheets on the internet, I edited them with pictures of ‘The Worst Witch’ characters and even changed the text to make them look a lot more interesting in order to engage the children. As I had read through the book once, I read through it once again and found phrases or words the children would maybe not understand and created flash cards with the meanings on the other side – the side with the words or phrases were all coloured purple as I believed this colour linked to witches. Creating the box itself was a fun task for me as I wanted the children to be able to look at it and know that the contents were related to the book. For this I found some black wrapping paper which had gold speckles on it and wrapped the box with it. I then printed and cut out photos of the characters and the name of the book in order to arrange them on the box as well.

When working through the story box with the class, I always began the lesson by reading part of the book then moved on to an activity from the box. Throughout the reading process, I would ask the children questions to make sure they’re understanding the story before moving onto the next part. I would also often recap before starting the next lesson. 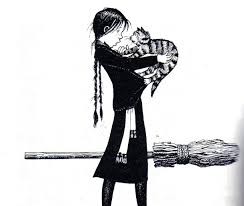 Reflecting back on my experience delivering my story box, I found the creating part the most enjoyable as I’m a very creative person and enjoyed editing the worksheets to fit in with ‘The Worst Witch’ theme. I believe I need to work on my confidence when reading out loud to a class as I felt nervous doing this and occasionally stuttered and lost my place. However, I did recover well and reread from the beginning on the sentence in order to make sure the children weren’t getting confused with my mistakes.

If I was to do the story box/sack with younger children such as primary ones or twos, I would most likely chose a fairy tale picture book. I would make sure that I would be able to use props with the particular book in order to use whilst telling the story. For example, Goldie Locks and 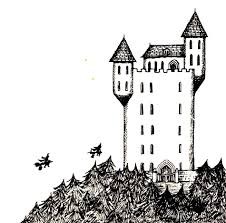 the Three Bears would be a good story to tell as I would be able to pull bowls, teddy bears etc. out of the box/sack. Another good way to tell a story would be to use finger puppets and get the children to act as the certain characters while I read through the story. This process would help with the younger children’s understanding of the story overall.

Overall, a story box or sack is a great way to get the children engaged and interested in the book or story that is being read. The different activates which link to the book are great ways to continue the children’s learning within different subject areas while constantly connecting back to the book.

Genie is the nickname given to a 13 year old girl who was discovered in November 1970 after spending her life abused and neglected by her parents. Genie spent her whole life locked in a small dark room which had its windows covered apart from 3 inches at the top – this was the only natural light the girl ever experienced. She spent her days strapped to a child’s potty by a homemade restrain and her nights tied into a caged bed with her arms and legs completely immobilised. Genie spent 13 years in almost total isolation as her father forbade her mother and brother from communicating with her. It was even said that close neighbours were oblivious to the child’s existence completely.

When Genie was found by services, she was the size of a six year old child and had no sense of language as she was never taught how to speak. The 13 year old girl was also found to be still wearing nappies and could barely walk.

Genie’s mother and father were both arrested for abuse, however, her father committed suicide a day before he was due to appear in court. He left a note behind stating “the world will never understand”.

When Psychologist’s heard about Genie, they seen it as a perfect opportunity in order to research into the theory of how it was believed that if children didn’t develop a language by a certain age, they miss the chance of developing it completely. The psychologists found Genie to not be mentally deficient, however, her traumatic past was haunting her. Today’s brain science studies show Genie’s left side of the brain, which is responsible for speech and language, to have become smaller and smaller due to being starved of stimulation. This process continued until her brain physically changed. As Genie’s brain was unstimulated, it was unable to develop the capacity for language. This means that, once Genie was found when beginning her teenage years, it was now impossible for her to develop language. These studies proved the theory to be correct.

Overall, I believe Genie’s story is a great example of how brain development is affected by the environment. As she was isolated in a dark room with no interaction from anyone, it affected her ability to learn how to speak as over the years, her brain had no capacity for a language to be learnt.

Why teaching? Well, if i’m being completely honest, i left school undecided about what i wanted to do in the future. I was never the person who knew exactly what job they wanted as a career from a very young age. I always changed my mind. It wasn’t until i went to college after leaving school that i finally made up my mind and knew i wanted to become a primary teacher. I have always been told that i had a good nature with children and i always found myself enjoying being within their company but it wasn’t until i attended placement in a primary school for two days a week that i knew that teaching was for me. I want to become a primary teacher because i look forward to seeing the children develop cognitively knowing that i had an input to this and help them learn new things to help them move successfully through their primary education. I also look forward to being able to support children with different needs and abilities along with learning about each individuals personality.

I want and hope to become a teacher who the children feel comfortable with in order to tell me when things are bothering them – whether it’s issues at home or at school. I want to be able to support the children in anyway i can and keep them safe. I also want to be able to use my creative skills within art lessons and decorate my classroom depending on a topic the class are learning about. I also want to become a teacher who makes the lessons a little more fun for the children to enjoy. I want the children to enjoy being in my class, however, i will be firm with them when they are breaking school rules. Overall, i want to be a teacher who is successful with educating her pupils the things they need for future education and will help children with different abilities to develop to their full potential.