Mathematics is widely used in astronomy. Astronomy, however, uses extremely large numbers since space is so huge. Maths can be used in astronomy to describe the distances between the earth and the moon, the earth and the sun, and between different planets. The distance from the earth to the moon is approximately 384,400km. This is a large distance considering there are things a lot further away form earth than what the moon is. The sun for example is 149,600,000 km away and that is still closer to the earth than what the dwarf planet, Pluto, is. Both of these large numbers don’t come close to how big our galaxy is alone never mind the distances between galaxies within the universe.

Light years is another example of the use of numbers to explain distance within space. Light year defined is how fast light can travel in 1 year and is used to describe the extremely large distances. In a vacuum, light can travel 300,000,000 metres per second. However, after using the speed = distance/time formula, you can calculate that in 1 year light can travel 9,460,800,000,000,000m. As this is such a huge distance, astronomers use this in order to describe the distance in space. They often use light years to emphasises how far different galaxies are away from the Milkyway.

Overall, Maths is an important part in astronomy. I found this extremely interesting and literally couldn’t picture how big these distances are or how much stars that actually is. Even though i couldn’t picture exactly how far it was, the use of light years to describe a distance was useful as it puts it into better perspective than billions of miles away. 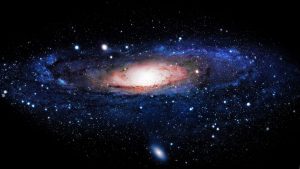