Who would have thought that maths is used within art. However, I have now learned that many artists have used a specific number sequence to create their artwork. These numbers are called the Fibonacci sequence.

The Fibonacci number sequence is made up of the fact that every number after the first two is the sum of the two preceding ones; 1, 1, 2, 3, 5, 8, 13, 21, 34, 55, 89, 144. This sequence was named after the mathematician, Leonard of Pisa, also known as Fibonacci. Details of the sequence were published within his book in 1202 which introduced it to into the mathematical world. He stated that he found a simple numerical series that is found commonly in nat

This exact sequence has also been used by artists when creating their images. For example, Piet Mondrian has been known to have used it within his art work. During our workshop, we created an image in the style of Mondrian through using the Fibonacci sequence. We did this by the use of graph paper and a ruler. In order to create the different sized rectangles, we counted out the squares using the numbers from the sequence. I found this task to be great way in learning one way the sequence could be used within art and how simple it made creating the image be.

Within this work shop we also created a version of the Golden Spiral. Using the sequence, we were to create different sized rectangles in a certain order and then used a compass to create the spiral. Although I found this a little more confusing to create, it helped expand my knowledge on the topic.

Moving on to other forms of mathematics seen in art. In 1509, mathematician Luca Pacioli published an article on a number that is now broadly known as the ‘Golden Ratio.’ This is a special number approximately around 1.618. This ratio, symbolised by Phi (Φ) appears within mathematics, art, architecture and other areas. It indicates a special ratio of line sections when the line is divided through the use of an equation. In the workshop we tried to work out the ratio through inputting the short and long measurements of the lines into the equation (a+b)/b = b/a. We found that both sides calculated to be approx. 1.618.

This ratio was used by renaissance artists for beauty and balance in their artwork. Leonardo Da Vinci is once artists that has been associated with the golden ration and Fibonacci sequence. His painting “The Last Supper”, painted between 1494 and 1498, has clear examples of the design and architectural features to be using the golden ratio. Some also believe that Da Vinci even positioned the disciples around the table in proportion to Jesus using the ratio. 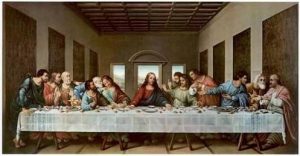 buildings. It was in fact used in the designs and plans for creating one of the most famous buildings in the world, the Notre Dame in Paris.

Overall, before the workshop, I would have never believed that art can hold mathematics in such depth as the Fibonacci sequence and the golden ratio. I never thought that portraits would have hidden mathematics within them. I think that the use of mathematics is a successful and effective way to create images and has been proven by various artists. In the future, I will now consider mathematical concepts to have been used within the creation of artwork and will even try these methods with my own class to see what they can create.

1 thought on “Mathematics in Art”