Some people think this question is ridiculous and that of course animals can’t understand numbers in any way, but is that really the case?

After leaving our input discussing this I was left confused to say the least, in this module you are constantly thinking deeper into the mathematics behind things and I often feel that one minute I understand something and then a minute later I am back at square one. So I am going to try come to terms with the question of animals being numerate through the example’s of Clever Hans the horse and Ayumu the chimpanzee.

Clever Hans is an example in the topic of animals being ‘numerate’, Clever Hans was a horse whom became extremely famous for being able to ‘count’. But was that really the case? 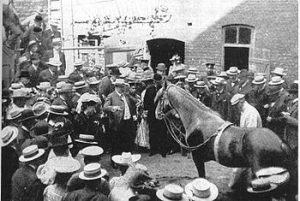 When a number was called out Clever Hans would tap his hoof the exact number of times and people were truly amazed – a horse could understand mathematics. For years the horse was taken into crowds and it would get asked questions in which he would respond by tapping his hoof to represent the number he meant. For example if Clever Hans was asked the question “What is 2 + 4?” he would tap his hoof 6 times. People couldn’t believe that this horse could actually understand mathematical questions and could then represent his answer with his hoofs. However it wasn’t long before scientists got involved and began to question what was really going on, they came to the conclusion that the horse couldn’t actually understand the mathematics at all but was being ‘signalled’ in some way by the owner/person asking the questions. So when the horse was put behind a closed door with no one to look at he no longer got the answers correct. Also if the owner/person asking the questions didn’t know the answer then the horse would answer incorrect. To me this proves that the horse was definitely not numerate because he could not understand the meaning of numbers at all, he was purely given visual aids on when to start and stop tapping his hoofs.

However we then looked at Ayumu the chimpanzee, he is very well knows for taking part in memory tasks and getting results which are outstanding – and a lot better than humans. The chimpanzee took part in a short term memory task which requires him to remember the sequential order of numbers, and the results he gets are amazing. Ayumu can do it with no difficulty at all, he gets it correct most of the time and if he makes a mistake he will get it correct the next time. As well as that, the speed he completes the task in is simply mind blowing. When we tried this in our input our results were not quite the same as Ayumu’s, with around 20 of us in class we struggled to remember the order of the numbers past 4 or 5. So what does this mean? Is Ayumu numerate or does he just have a good memory? 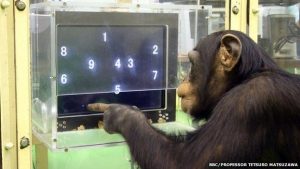 Clearly the chimpanzee has amazing memory because he only see’s the numbers for a small amount of time and can then immediately recall them, but to me he must understand numerals to be able to do this task because without this how would he know which number to tap.

Matsuzawa (2010, page 1 ) highlighted that Ayumu had mastered the ability to touch the nine numerals in the correct order as they appeared randomly arranged on the screen. A numeral is a symbol which represents a number so surely the chimpanzee understands this concept? He may not be able to actually apply mathematical skills with the numerals or numbers, such as if there were 2 phones beside each other he wouldn’t associate that with the numeral 2. However , he does understand the concept of numerals as he remembers the symbols which represent the numbers. Ayumu must also grasp the idea of ordinal and cardinal numbers, because although he understands numerals, how does he know which numeral comes after the other? He understands cardinal numbers (or at least the numerals that present these – 1, 2, 3, 4…) but he must also have knowledge of ordinal numbers to understand the idea that 2 comes after 1 and 4 comes after 3 etc. There are many questions and theories about how the chimpanzee really thinks and acts but to me it is very clear that Ayumu is numerate in some way. He understands numerals and the order in which they come (ordinal and cardinal numbers), and also understands what he has to do in order to be correct each time – tap the numbers/numerals in order.

Animals surprise us day by day but is it likely one day we will see them taking part in a maths exam? Who knows.

Matsuzawa, T. (2010) The Mind of the Chimpanzee: Ecological and Experimental Perspectives. United States of America: The University of Chicago.