In one of our inputs we had the chance to come up with our own number system, we had the freedom to do whatever we liked – as long as it made sense to us and we could explain our thinking.

Although when you sit down to begin a task like this you try to come up with something totally original that makes sense, the reality is you probably end up creating something that either already exists or is similar to an existing number system. But never the less it was a challenging task and something that we all became engaged in, and many people came up with some really interesting ideas. 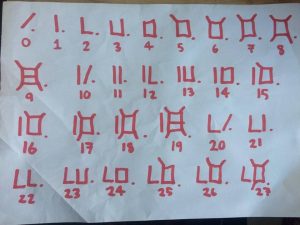 This was my partner and I’s number system that we came up with.

Our number system was very much similar to the one in which we all know – apart from the fact it looks completely bizarre. We went along the lines of having a base of 10 number system like ours and had numerals that represented each number. So each number from 0-9 had a numeral which represented it, and then like our own when we get to 11 we just put together the numeral for 1 and put 2 of them. At the time we never quite realised that we had stuck so much to our number system but when we came to discuss it we realised it was very much the same. One thing we didn’t quite get to was coming up with the language to represent our number system, although we had it all planned for how it would be written, we had no idea what our numerals would sound like.

So where did our number system today come from? We use Hindu-Arabic numbers, which were created by Hindu’s in India years and years ago. Before this we used roman numbers which we are all familiar with – I, II, III, IV, V. However when European countries seen the Hindu-Arabic number system they quickly realised it was a much easier and simpler way to work with numbers and perform calculations. Fibonacci supported this (Bellos, 2011, page124) as when he was first exposed to Indian numerals he realised that they were much better than Roman ones, he then went on to write a book about the decimal place – value system which demonstrated how much faster using Indian numerals allowed you to perform calculations. And since then we have stuck to this number system which is engraved in our minds in a way which makes it difficult to forget or think of something new – as proved when I tried to make a ‘new’ number system.

Our number system is crucial in our everyday lives, from using mathematical language to completing equations – it is everywhere. But it isn’t often we really think about our number system in any depth, we just accept the fact that we understand numbers because it is part of our everyday life. Whereas Ma (2010, page 122) highlights that with a profound understanding of fundamental mathematics you should look within mathematical concepts and be able to make connections beyond what you know, and that is what we done in class when we went beyond the existing number system we know and tried to come up with something new – but still be able to find the connections within it. Therefore Ma’s idea of connectedness proves that we as teachers need to not only use the mathematics we know, but go beyond it and discover basic and complex connections within every day mathematics – for example looking at our basic number system and asking questions like where did it come from? who invented it? when did it come around? what did we use before this? And the answers give you connections within mathematics that you didn’t think about before.