When I seen we had an experiment to prepare for the first day of semester two I panicked, thinking back to science at school I remember all the experiments taking a lot of planning and time in the lesson to try out. I started googling ‘simple science experiments’ and seen a lot of really good ideas to use in the classroom with children that actually aren’t so complex after all.

During my search to find one that I could easily take into uni and do I came across one which made me think to myself, that surely doesn’t work? So I decided to give this one a bash as it required very little money and time.

A food bag, pencils and water – the only three things I needed for the experiment. The idea of the experiment is that if you fill a food bag with water and seal the top, when you stick a pencil right through the bag that the water will in fact not leak. Having no pencils I decided to try the experiment the night before I planned to get pencils by using a knife instead of a pencil. This was a stupid idea that only resulted in my jumper getting covered in water. As soon as I stuck the knife through water just began to pour out.

I finally had the pencils and was ready to try the experiment, first try and my experiment worked. No water at all leaked out when the pencil was stuck through the bag. The reason being that the food bag is made up of polymers which are long chains of molecules, so when the sharpened pencil is inserted you are separating the polymer chains without breaking then because the long chains of molecules squeeze around the surface of the pencil resulting in no leak. 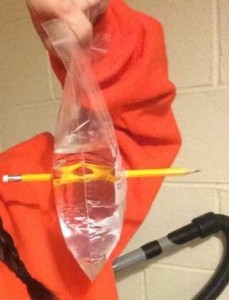 So this made me think how science doesn’t have to be complicated to a point where we cant understand and that with a simple visual experiment children can grasp an understanding of science. I as a teacher could take in this experiment but before hand get the children to discuss what they think is going to happen when a knife is put through and then if a pencil is put through, this would get the children engaged in a discussion before actually seeing the experiment.

The GTCS website clearly states that ‘Practitioner enquiry, as defined by Menter et al (2011), is a ‘finding out’ or an investigation with a rationale and approach that can be explained or defended. The findings can then be shared so it becomes more than reflection or personal enquiry.’. This to me conveys that an enquiring practitioner in terms of teaching is someone who does further research on topics so that it can ultimately impact both their own and children’s learning and development for the better. Following my reading on the GTCS website I feel what follows fits in with my opinion of what an enquiring practitioner is: ‘argued by McLaughlin et al (2004) that teachers who engage in research have ‘better’ understanding of their practice and ways to it.’. This highlights the idea that by doing further research a teacher gets a much better understanding of what they are going on to discuss with their pupils and also how they can build on the way they are teaching the children to maximise their learning.

The idea that teachers can work collaboratively to develop the curriculum is definitely a benefit of practitioner enquiry because together teachers can discuss ideas they have found and think about how they could include this in their practice. Also this gives them the opportunity to listen to each other and develop a deeper understanding of different point of views. GTCS stated ‘Staff are able to work individually and collectively to investigate, question, consider and plan for change and development. This kind of school improvement is evidence-informed and critically justified.’, this demonstrates that teachers have a solid understanding of their research to ensure it will positively impact both them and the children.

However being an enquiring practitioner can have challenges. Due to teachers working collaboratively, this could turn in to a disagreement because they all may have different views which they then have a debate about but in reality they may drift off the real topic resulting in no clear way of how it will positively impact their class. This is why they need to aim to minimise these challenges to avoid a less effective practice.

Being an enquiring practitioner at this stage as a student teacher is something I feel is essential in furthering my learning. After lectures I can go through my notes and find points which I could develop and do further research on. I also need to be more aware that not everything may be a set answer but something I could actually question and find different views on. Not being afraid to speak up and question things is something I feel will positively benefit me both at university and when I go out on placement. This makes it evident that being more aware of being an enquiring practitioner at this early stage will benefit my learning both now as a student teacher and in the future as a qualified teacher.