In my opinion, personal values and morals make a person, and while others could argue that a career changes those values, I believe that it is the values themselves that change a career.

To explain what I mean, if someone has a generally calm, confident and caring personality, as I hope I show, my opinion is that they will be a better teacher. There are obvious exceptions to this rule, however, I think that the mindset you go in with will effect the outcome, not vice versa.

A teacher who genuinely goes into school in the morning with a passion to motivate their children, allows the children to “get more” out of the lesson. Without the key role model of a motivated teacher, children lack enthusiasm to learn.

While there are some personal matters which should be left out of the classroom, I do not think that it should be a “Jekyll and Hyde” situation.

I’m not sure how many of you are fans of Downton Abbey, but in the final episode, one of the footmen becomes a teacher in the local school. He has lots of motivation preparing lesson plans, however, the children do not engage with him. However, the next day when he explained that he was in service, they related to that as many of their parents were in the same position. This, while only a TV drama, emphasized the importance of having a rapport with your class and the benefits that can have on learning.

The police force are in a career which would, I believe, undoubtedly be seen as a profession, and having watched “24 hours in Police Custody”, that has been proven to me even more. 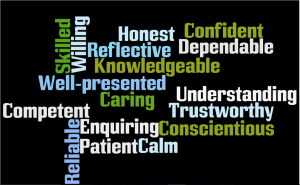 These were the words that I have previously used to describe a professional. When looking back on these after observing the police unit, I believe that these are truly, but not exclusively, the qualities needed to be a professional. However, on reflection, there are a few more I would add. Linking to caring, I would add that professionals must be concerned about and considerate to the people they are working with. This was shown particularly by the police force in that they understood that they had a “duty of care” to the individuals they worked with. They were always asking if the suspects, and the families had any questions, and in one instance worried for the health of a suspect as he looked “pale”. This shows genuine care that I believe not everyone could show to these individuals. Another instance of this was where the officers did not want to go to the home “mob handed” as there was a child living there, and they did not want to frighten them. Again this shows a duty of care, not just for the suspect but for their families. For the second suspect, this was evident where the officer sat down with the wife, and explained what was happening. This would make her feel included and could lead to better cooperation with the police.

In terms of the video itself, I would reiterate my thoughts on having to be calm but confident. The first suspect shown in the video was not particularly helpful in the interview, however, the officers stayed calm, and treated the suspect with respect, even though he was under arrest. The officers in the same interview also showed confidence that must come with being a professional. The officer was determined that she was going to ask a certain question, and was confident, even though the solicitor was not happy.

An example of professionalism can be described in the scene where the viewers were informed that the suspect would work with social services whilst on bail. This inter-agency working takes the strain from the police as they can allow the suspect out on bail knowing that he will be looked after and can no longer pose any threat to his family.

In spite of the overwhelming professionalism of the police officers, there were some points which struck me as rather unprofessional. For example, the officers did not have a dress code as such, apart from the police body warmer that they wore while out visiting houses. While I understand that this may have been to make the suspects feel more at ease, I believe that dress code is important when considering professionalism as the way you look can often be the first impression people get. To establish a sense of professionalism, and the qualities that go with it as listed above, can form an early trust or bond between the “service user” and the professional. In positions such as police officer or teacher I believe that this relationship is extremely important. From a police point of view, without trust from suspects, there is less chance of cooperation. From a teacher’s point of view, this trust may not only come from the children, but also from the parents who will look at the teacher and instantly make assumptions about them and the school they work in, which I believe can all come from dress code.

The impact of the police officers’ professionalism was evident in how the suspects acted. They were not disrespectful towards the officers, as they themselves had been shown respect, and they were cooperative, especially in the case of the second suspect.

From watching this programme I have learned that the term “professional” is really an umbrella term which includes connotations of many other skills and qualities. While each profession will interpret these differently, they will all be used to some extent whether in the medical, police or teaching profession.The programme has reiterated to me that a “professional” is much more than someone who goes to work in a suit and tie and carries a briefcase. A professional is a well rounded person with genuine good intentions and a desire to succeed in what they do for themselves and the people they work with.