So now we have come to the end of our maths journey, and I can honestly say that I have 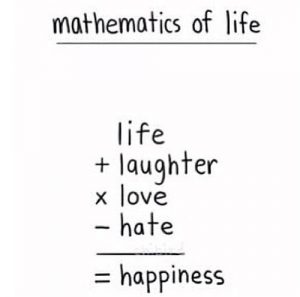 enjoyed this module very much. It makes you think of maths and everyday life in a different way. I think everyone would agree that maths plays a huge role in life, however, through this module we have seen just the extent of maths in places you would not imagine, and in many extraordinary ways. I have seen the whole class at points in this module confused, astounded and most of all in awe and wonder of the maths we are being shown.

The main text through this module has been Liping Ma’s (2010) book ‘Knowing and Teaching Elementary Mathematics’, which describes 4 main principles in having a Profound Understanding of Fundamental Mathematics: “Basic Ideas, Connectedness, Multiple Perspectives and Longitudinal Coherence” (p122). At the beginning of this module, these principles meant nothing to me, however, now I feel I have a good understanding behind them, and can identify them in real life through the inputs we have had.

Connectedness is where maths ideas are connected together. For example, being able to multiply, contains the ability to add as multiplying is just repeated adding. Knowing this connection between the two allows children to grasp the underlying principles behind what they are doing which, Ma argues, allows them to have a more solid understanding.

Multiple Perspectives is the ability to see how to solve a problem from different angles. For example, when solving 7+9+13 you could complete the sum in that order, or you could add 7 and 13 first, making the sum easier. Being able to comprehend that problems can be solved different ways allows you to choose the best one, making problems easier.

Longitudinal coherence is looking at the development of skills, described by Ma using the progression of the curriculum. When looking at measuring, children start by learning weights or lengths and what they look/feel like. They can then move on to learning about comparing objects and then converting units. This progression is linear, therefore describing longitudinal coherence.

As a result of this module, I find myself thinking more mathematically about life. At work, eating lunch, even putting up Christmas decorations I find myself considering the mathematical concepts involved. While I would not say that I understand every element of complex mathematics that I have been taught, I would say that the module has taught me things about maths that I had never thought about before, and has made me see life in a new way. A mathematical way.

There has been some distinction in school subjects between those creative subjects such as music and art, and subjects which are considered more academic, such as maths and science. However, when we look at the relationship between music and mathematics, there are a substantial amount of links between the two.

Counting plays a huge role in music, especially if playing along with a backing track or other musicians in an ensemble. I personally joined the school orchestra in my sixth year of school as

a percussionist, and found out these difficulties quickly. However, I believe that this is a prime example of Liping Ma’s “multiple perspectives”. There are large sections of the piece where certain instruments would not play, often written in sheet music as shorthand, such as in the picture right. This would indicate that

there are 15 bars rest. If a piece of music has 4 beats in the bar (as indicated by the time signature, see picture left, where the number of beats is the top number), then this would indicate 15×4 beats rest, or 60 beats. A musician has a few option in how to approach this mathematically. They can work out that they are waiting for 60 beats and count these out, however, this becomes difficult if you lose count. The other option is to keep the numbers in their simplest form. I found it easier to count using your fingers, a skill which is often discouraged past early primary mathematics. Counting four beats and then denoting this with one finger, then counting another four beats and denoting this with a second finger was my strategy, which seemed to work well.

Looking back on this with the mathematically thinking I have acquired through this module, I can see many other mathematical qualities in this other than simply counting. The number of beats in the bar denote a base system, as I have discussed in a previous post. As I was counting in fours and then denoting this with a symbol (in this case a finger), I had effectively used a base 4 system in working out the timings, just as farmers denoted a particular amount of sheep with a stone in their pocket or a mark on a post.

There is also an element of pattern and symmetry in music that is often overlooked. There are often repeated patterns or phrases in music, especially in minimalist music, which is made up of repeated phrases built upon one another. An example of this is shown below in the clapping music, where one phrase is repeated with slightly altered timing to create a minimalist piece:

I believe that this would be a good tool to use in a classroom with pupils in order to to reinforce their maths learning. This, I believe, can link with Ma’s principle of “Longitudinal Coherence”, which looks into how ideas and topics are developed. In using music to teach children about pattern and sequence, you show them how these skills can be applied, therefore giving the topic a relevance, which is extremely important for young children. This would be an interesting lesson in to try in future.