On Thursday evening, myself and my two friends (Katie and Katy, just to confuse things) ventured on a Dark Dundee walking tour. 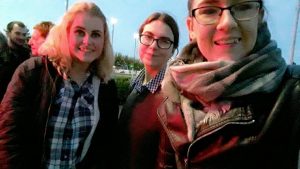 We had chosen to go on their least dark tour Twisted in Time as we wanted to know more information about Dundee’s history that we could use in our classes (and social studies assignment) and if this would be a suitable thing to use as a class trip. The Dark Dundee tour guides said whilst we were walking they had only worked with secondary school pupils before, giving them not only the tales and facts they know about Dundee’s history but also knowledge about travel and tourism and running a business. They showed great interdisciplinary learning ideas but sadly they had never worked with primary schools. However, before we were even half way round the tour, the three of us had decided this would be a fantastic trip to do with children, if the tour guides would have a younger class and miss some parts of the stories out to keep it PG. We felt as a group, children would be much more engaged in this than going round a museum. Katie and I had previously already said, that although there would be a lot you could do, we would find a trip to the McManus Galleries (Rennie, 2017) hard to plan for and managed therefore at our stage of development we would not take a class there. On the other hand, we definitely felt we could take a class easily on a Dark Dundee walking tour.

Why did we decide this? To the tour, we go. 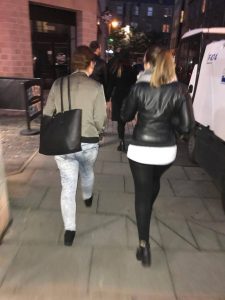 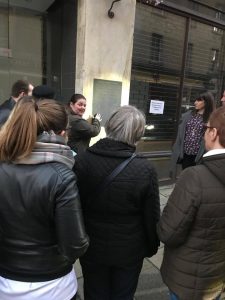 The Twisted in Time tour took us on a walking tour around things: statues, plaques, streets, in Dundee which I knew nothing about, things that I have never even 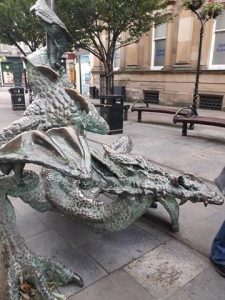 noticed in Dundee before but are all critical in the history of Dundee. As we walked around these different spots, the Dark Dundee tour guides, told us the famous tales that had been slightly twisted over time but took those tales back to what they could prove to be true.

We started at the tour at the Dragon statue in the city centre. The tour began here as this statue is actually Twisted in Time itself. The Dragon came to be here after the tale of the nine daughters of a Dundonian farmer. The farmer had sent one of his daughters to the well to get water one evening, after a while when the daughter never came back, he sent another of his daughters to find out what was going on, this continued until all nine daughters never came back. The farmer then went down to the well to see a serpent at the well and all nine of his daughter dead. The farmer, alongside one of his daughter’s lover, Martin and the rest of the town, went to find and kill the serpent. The town tried to drown the serpent but this did not harm the serpent eventually the crowd yelled for Martin to slay the serpent with the club he had. This apparently took place on Strathmartine Road in Dundee and it has been named after Martin striking the ‘dragon’ which killed his lover and her sisters.

The tour continued down to Castlehill. Yes there is no Castle or Hill in Dundee city centre, you are right. However, well before the city centre was what it is today, there was apparently a castle situated on a very high hill which was incredibly difficult to attack. The castle was eventually ordered to be torn down by the old town mayor. The rubble and remnants created Castle Street. Along Castle street, the site of the first known pub in Dundee, The Lion Tavren, was situated along one Dundee’s old, narrow, windy streets – the layout of old Dundee was vaguely shown on a very old plaque on the side. 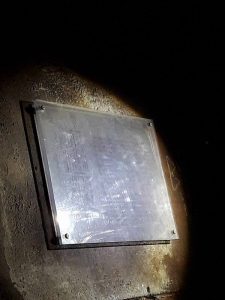 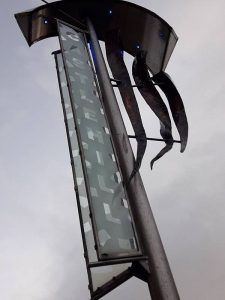 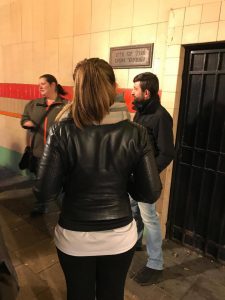 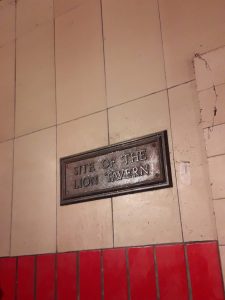 The plaque showing the old and current streets of Dundee on the old Castlehill, now known as Castle Street.

Listening intently at the site of Dundee’s first known Pub.

Further down Shore Terrace, which was where the River Tay used to flow to, we learnt about Greasy Johnny and the Whale. A humpback whale once was spotted in Scotland, many people tried to kill and claim the whale but eventually the whale was auctioned off. Greasy Johnny outbid an Aberdeen University Professor, John Wood who wanted to dissect the

whale, to have the whale. Johnny, made a business out of the Whale by keeping it in a warehouse, selling tickets to people, at least 10,000 on the first day alone, to view the whale. After the whale was clearly dead, Johnny invited Professor John Wood to Dundee to dissect the whale as he could sell more tickets for people to view the dissection of the whale. After the whale was dissected and all that was left was the whale skin, Greasy Johnny took the skin on a trailer around the country, getting yet more money for people to see the skin of the humpback whale.

We were lead up to St Paul’s Cathedral in the city centre were the tour unpicked the plaque that states William Wallace started the battle for Independence here. The guides said it was an over exaggerated claim. What is supposed to have happened is Wallace stabbed and murdered a governor’s son, Selby, after an argument at school. Wallace left Dundee and hid out in Perth before he was returned to Siege of Dundee, hailed a hero as he got rid of King Edward and his troops from Scotland. 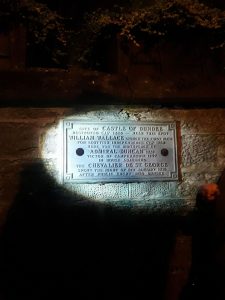 A final memorable tale, was about the witch, Grissell Jaffery, who was supposedly burnt alive at the Seagate on this cross. There are two mosaics down one of the closes where the memorial plaque is, one of fire and one of water to symbolise that they tried to drown Grissell which did not work and then burnt her as the last known witch in Dundee. 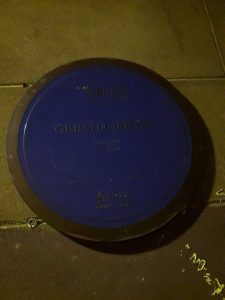 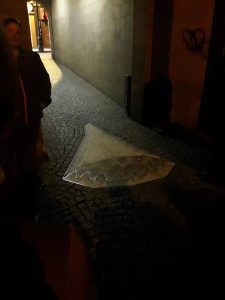 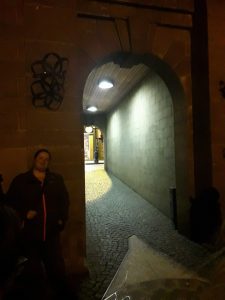 The plaque and fire mosaic at the close remember Grissell Jaffery.

The tour ended with Grissell’s death. Both the tour guides gave fantastic accounts of historic Dundonian tales. This was a highly engaging way to learn about different stories of Dundee. I think older primary classes, perhaps primary 6 or 7, would thoroughly enjoy this experience compared to a museum or learning from textbooks. This can meet a lot of the experiences and outcomes in People, Past Events and Society, particularly SOC 2-03a and SOC 2-10a in People, Place and Environment (Scottish Government, 2009). Being able to walk around and physically be at the sites, see the plaques, mosaics and statues made the tales far more interesting in my opinion than seeing photographs or reading the stories. The three of us felt that children would take a lot more in from being on a Dark Dundee tour than being in a museum or the guides coming into the class to do a talk about the history of Dundee. This allows them, through active learning, to see different kinds of sources regarding Dundee’s history to build a picture and story of Dundee from the earliest years (the guides suggested the earliest story they knew they could place between the year 0 and 1000) to bring this back to the what they know as the present, for example from Castlehill to Castle Street. Again, this can help them meet different social studies outcomes such as SOC 2-01a.

After the Twisted in Time tour, the three of us decided we would definitely go on another and recommend the Dark Dundee tours. The guides were fantastics, the stories were entertaining and the whole evening was engaging and interesting to learn about the history in different way. This post has merely been a brief overview of the tour and if you wanted to hear the full stories, more tales and learn about Dundee’s history I would recommend going on one of their tours. We are considering their special event in Claypotts Castle next!

A video of my experience of the walking tour!

4 Replies to “Tales Twisted in Time”