On Wednesday, as my previous blog post stated, I was off for my first day of nursery for part of my Transition Project at university. The nerves this morning were there a little bit but not as much as the night before.

The minute I walked into the school, I was greeted by a lovely receptionist at the front desk for the school which automatically made me feel more relaxed.  When I arrived at the nursery, they weren’t exactly expecting me. Which seems to be the issue whenever I arrive at a school so thankfully that never made me nervous at school. I was introduced to the staff at the nursery which was a team of 16 ladies for a nursery which can have 60 3-5 year olds and 10 2 year olds in their panda room. Although, they currently aren’t working at full capacity.

Immediately, this amount of children and the size of the nursery was a big change from the nursery I went to which was about half the size in both respects. I had not yet seen the size of the nursery but I was imagining it to be quite big. Much to my surprise, it was about half the size I expected however it did have a big outdoor space to play. Outdoor play is something I am hugely passionate about due to the positive impacts it makes on childhood; the statistics on how well the Scandinavian countries, from whom outdoor play holds a substantial part of their pedagogy for early years’ education; and because many of the fond memories I have of my childhood are from playing outdoors with my parents.

The afternoon in a nursery was very similar to an episode of “The Secret Life of Four Year Olds” from channel 4. There was a lot going on for the children to choose from but apart from at the beginning and the end of the session there was no structure to the day; it was all free play. When the children first come in, they are spilt into six groups of ten (when the nursery is a full capacity) to have a chance to speak with one of the nursery teachers* and to do the register amongst other things.

The group I was placed with for the beginning was consolidating what they had learnt yesterday from their visit from “Farmer Jill”. Firstly, I thought the fact that they had left this consolidating until today instead of the group time at the end of yesterdays session was a fantastic idea. This meant that the children could go away yesterday and think about what they had learnt , giving them time to process all of the information they had learnt before they had to summarise their knowledge. This was very similar to what I can imagine a structured lesson with a small group of Primary 1 pupils could consist of. When we began the questions on consolidating their knowledge were very closed questions such as “can you remember who came to visit yesterday?” but this meant that all of the children knew the answer but the same children were always the ones who wanted to speak which quickly became chaotic was three or four children were shouting out different things. The children’s group leader* improvised and had the children pass round one of the spaces which meant that the children all had a chance to share what they could remember from yesterday and what they enjoyed most. This first half an hour of the afternoon session was very structure and the children were sitting for a long time before they got to play. However, I can see this as beneficial for the children for when they are moving into primary school and are expected to have structured lessons all day very soon.

The rest of the afternoon was free play for the children. One of the big things I noticed was the lack of interaction with technology. There were two computers and one smartboard that the children, as far as I am aware, can use. However, the children were much more interested in doing activities such as baking, making puzzles, arts and crafts but mainly they were interested in playing games outside including tig and tag and hide and seek. To see children enjoying playing outdoors in the current age when technology is an ever growing medium and outdoor play is steadily decreasing was very encouraging to see.

One of the big things I have observed with the teachers in the nursery today, is their range of tone of voice and their excitement when talking with the children. I was always aware that this would be something I would need to work on when going into an early years setting as my ability to change of my tone of voice with ease can be rather limited. To be able to observe how the nursery teachers do it and how the convey excitement when the children are excited about something is definitely something I am paying close attention to. It was also when the children were speaking over one another in group time, the teacher was never cross or shouted at them but the way she spoke when she asked them to allow someone else to have a turn meant the children understood what they were doing was not kind to the person whose turn it was to speak. I am hoping that through observing this practice over the next 8 weeks that to be able to pick up and replicate some of their skills to be able to improve my practice for my third year placement.

Overall, I had a fantastic first day at nursery: there were many great opportunities to observe, learn, build bonds with the children and most importantly, play. I am thoroughly looking forward to going back after the October break.

*As I have not yet had the chance to ask permission to name the teachers in my reflections, they will currently stay anonymous.

Before I get started, Happy World Teacher Day!

Facebook reminded me today that it was 5 years ago that I lasted stepped foot in a nursery. That was for a grand total of one afternoon and I was a 15 year old who was keeping an open mind to my career path. I must have had about 4 different careers I wanted to do after I left school at that time. Now, after that week’s work experience 5 years ago, I am in my third year of studying to become a primary teacher and I am heading back to nursery today.

I have signed up at university to take part in a research project – #UoDTransitionEY on twitter if you’d like to follow our updates –  with my tutors and 7 fellow students. The project is to get the eight students into a nursery setting for one afternoon each week, for eight weeks. The aim of the project is allow the students to develop their communicative and free play skills in an early years setting before our third year placement in the early stages of primary school (primary 1-3). The project comes with out any paper work or folio work that would come with a normal university placement and it is solely to allow us to focus on developing our skills with young children.

My skills with young children are on the limited side. I have taught swimming lessons, athletics classes and played with younger children whilst out in America at working at a summer camp. However, my main base of experience working with children tends to be with children normally over the age of around 8 years old. Therefore, this project is looking to be a fantastic opportunity for myself to gain some experience and confidence working with younger children before going to my third year placement.

However, today I am currently feeling rather nervous. It’s the first day at a new place with new staff and new pupils which always seems a little daunting. Yet one of my biggest worries (a typical girl one that is) is what to wear? This already makes me feel a little bit more at ease than I would heading off to placement on my first day as there is no paper work, no file, no questions that I can forget to ask. It’s all about play, having fun and developing my confidence today. The tweets from my tutors are definitely helping to lower the nerves and encourage the excitement! 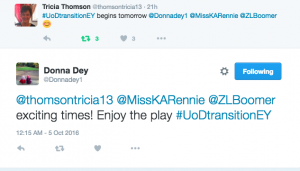 After I pick out an outfit that is. Wish me luck.