Sadly, my time at Claypotts Castle Nursery is already over. However, it has been a truly fantastic learning experience. I have been able to have a hands on experience of working with early years children which I have not yet been able to do for more than a day. This has definitely made me feel a lot more confident now that I have my two schools for my third year placement. A few of my friends who have not been on the transition programme are slightly worried at what they are to do in the nursery and now having been into one for 8 afternoons, I feel a lot more confident and at ease at what I am expected to do in the nursery when the time comes.

Over the last two weeks, I have began to see the planning in the nursery and how lessons are taught in a play environment. After seeing the plans, the group lessons that the children have at the start and end of the afternoon all link back to the experiences and outcomes. This outcome is chosen by the group leader and they meet this in the same way a teacher would in the classroom – developing an idea that they feel would allow the children to develop to meet the criteria. There are also opportunities for the children to choose to engage in an informal lesson with one of the group leaders. This was so informal as it was through the children’s choice if they engaged in the activity that I was unaware of this happening until the second last and the last week.  On the second last week, one of the practitioners had taken children to make pictures simply using felt which was to meet the experience and outcome EXA 0-02a (Scottish Government, 2009, p.3). The children created their pictures on their felt square with pieces of felt before covering them in water and fairy liquid and rubbing this in to make the pieces stick together. I assisted the practitioner to make notes and take pictures for the children’s observation for the learning journey folders. This was a very interesting opportunity as I was able to see the different abilities that were already prevalent in the children with the language development and ability to take turns and think about others. There was huge difference in the abilities and this is something I am definitely going to keep in the back of my mind for my third year placement.

On my final week, I was asked by a practitioner to work with a group of children to create an experiment. The practitioner had read that if you inflate a balloon indoors then put the balloon outdoors due to the cold weather, it should deflate overnight and if you then take it back inside to the warmth, then the balloon should inflate again. The children and myself worked on blowing up the balloons, only one of about seven children could blow up a balloon, which i thought was pretty impressive for a 4 year old. Before taking them outside and tying them to a tree. The children all had their names on their balloons and were excited to come back tomorrow to see if the experiment had worked. Although, there is not significant learning in this I believe, developing language skills in the children such as using the word experiment and asking them what they thought would happen through closed question ‘do you think the balloon will go down outdoors or do you think the balloon will stay the same?’ is developing their hypothesising skills for science which they will return to develop further in primary school.

Overall, the whole project has been so insightful. I have learnt a lot about how the nursery works. I have been able to see what children are like from a young age and how they can learn through play. I am truly thankful to Claypotts Castle Nursery for having me every Wednesday and my three lectures running the project for this opportunity. This has given me a big boost of confidence and taking away a lot of questions and nerves for returning to a school in February for my third year placement. I would definitely recommend if the opportunity is available to the upcoming years to take it!

Upstart is a campaign for a nationwide moment to push back the starting age for school in Scotland from 4 or 5 years old to 7 years old to allow time for play and for children to be a child for as long as possible.

Queue the mad panic from parents. But just wait… There are so many benefits it may be time to step out of your comfort zone and into a new adventure and here is why.

The lecture theatre was filled in Dundee – Brenda (the Convener of Upstart) expected around 30 people but with a keen audience of over 330 people turned out it was the biggest launch for Upstart yet. 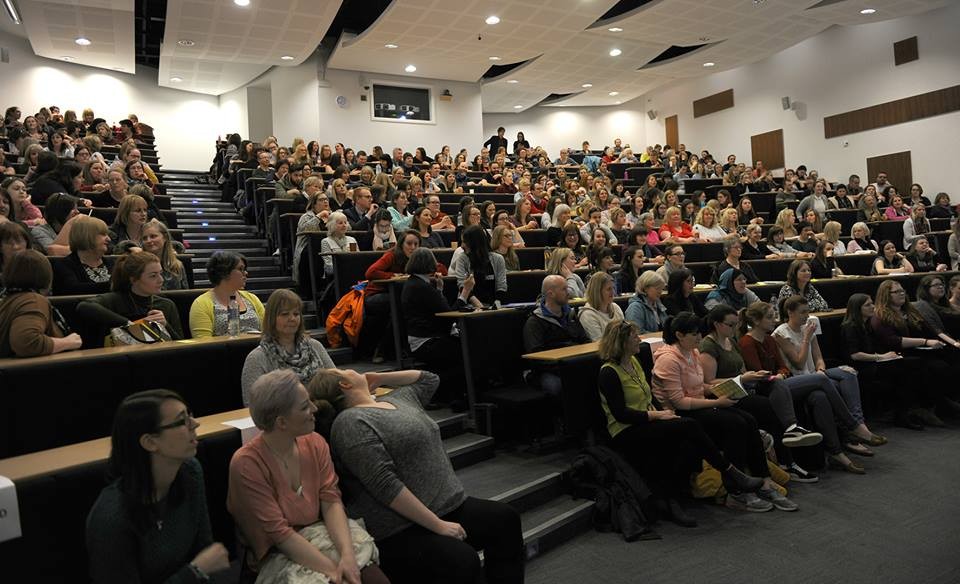 So why would we want children to start school later?

I have already looked into this in an early blog post available here.

Those countries that start at the age of 7 years old have a play-based kindergarden for 3-7 years old but by the age of 11 years old there is no difference in reading ability and those who start school at 7 years old are in fact keener to learn to read than their peers who started school at 5 years old.

In Finland, they do the least number of hour of schooling in the developed world yet still get the best results. They start school aged 7. They play until the age of 7. They lead healthier lives physically and mentally, they live longer and they are still better academically.

If we are living longer lives as adults, which Brenda quoted could be until 120 years old for this generation, then why are we continuing to decrease the time that a child spends playing?

The idea that children should play until the age of 7 is not a new idea. Sue Palmer, the founder of the Upstart movement and a language and literacy specialist, informed us at the launch that the idea originated from the Greeks.

The benefits of play are extensive. Sue Palmer and Dr Suzanne Zeedyk stated that free play build and influences many areas of our lives: it builds resilience, problem solving skills, social and communication skills, self-regulation, a love of learning. Free play influences creativity, sensory development, emotional experiences, friendships, a child’s thinking ability, motoric development, and the quality of marriage in later life. But the problem? Free play, such as playing in a sandpit, does not look like learning and in Scotland we love to push education.

Prince George at two years old is off to “nursey school” – into school at two years old. But according to the press it is not for the Prince to have a chance to play to develop all of the skills above it is to get him “into lessons” (The Telegraph, The Daily Mail and The Metro). We are too quick these days to put extra pressure onto children by adding the element of schoolification to early education.

The experiences a child has clearly affects the kind of adult you are. The pressure put on children currently has a clear impact on their mental health as children and as adults. In Scotland, there is a real decline of play – due to the school starting age and the development of technology. 2 in 3 children aged between 5 and 16 years old have their own tablets and at least a quarter of children are sent to bed with their tablets. In Scotland, there is also a huge increase in mental health problems and there is a widening achievement gap. How does our First Minister plan to fix this? By putting yet MORE pressure on children and teachers by reintroducing standardise testing – they didn’t work with the old 5-14 curriculum so why are we going back to this idea? Why do we not move forward for a 21st century change? Into a new revolution. A new adventure. An adventure where play and childhood is at the forefront?

Still unsure? Have a look at some more evidence