After the Tessellation and Islamic Art maths lecture with Tara, I thought I would reach to the blog again.

Before starting this lecture, I thought shape in general for maths was quite boring. There was nothing interesting or mesmerising about shape when I was learning about it in primary school. However, tessellation was taking shape and doing something completely different.

oes not only involve shape but angles as well. I never realised that only shapes that when the points touch the external angles make 360 degrees would tile. For example four square edges would join together, each square internal angle is 90 degrees so four touching square angles equal 360 degree and they fit together perfectly therefore they have the ability to tile/tessellate. This also works for triangles (shown to the left), hexagons (shown below) and any quadrilateral shapes. However, it does not work for octagons and pentagons.

This is mathematics that is used by any tiler probably subconsciously. If I ever need to tile a room, I now know which shapes to use and which shapes to avoid! Although I do doubt if I will ever been tiling anything…

Using shape to make Islamic Art was fascinating. I have never thought of usi 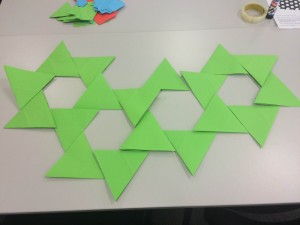 ng shape to create art before in this way and it will definitely be a cross curricular activity I use when I go back into the class room. The nipple and paste idea to create new picture of tessellation is also another maths and art activity I will definitely consider using within the classroom.

This is the kind of art that inspire myself to get the children involved in rather than just another drawing or painting, it is something different for maths, art and religion that I would hope I engage children in all curriculum areas.