Ok, so all my friends from the Central Belt of Scotland talked of great trips of the Museum of Scotland in Edinburgh for class trips. Being a ‘Northern’, I had never been and was a little jealous. So, with the elective as a great excuse, Katie and I set off to Edinburgh for a day trip to the museum. 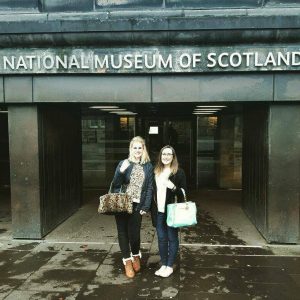 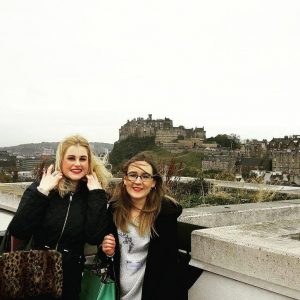 I walked into the museum and was overwhelmed by the size of the place, there isn’t anything up north quite as big. In the museum, there are sections for Scotland, Science and Technology, World Cultures, Art, Design and Fasion and the Natural World as well as the special exhibit section. There is so much in the Museum of Scotland, I as a 21-year-old adult, found it hard to focus at first. There was just so much to play with in the Technology section which we just so happened to walk into first. Another considerable difference, was the amount of children who were in the museum. Whenever I have been on any other of my trips, the children have been scarce. In the museum, there was a plethora of children in the technology section. This showed to me, this maybe a very good trip as the children would choose to come here but on the other hand, it may not be such a good trip if you worked in the local area as the children may have already been and therefore, may not be as interested in the museum.

This made me think as a teacher, there would have to a thorough plan in place for a trip to the Museum of Scotland as it would be quite easy to derail from the purpose of the trip. However, I would also not be opposed to timetabling in free time for the children to explore a section such as the technology section as it was highly interesting and I feel a class of primary 6’s or 7’s could be trusted to enjoy the free time sensible and come back to a designated point at a given time. This could be done with a younger class as well but I suppose it goes on how well you know and can trust your own class rather than a set age.

After spending probably a little too much time having fun, we only had two hours in the museum, Katie and I ventured up to the top of the museum for the section “Scotland: A Changing Nation”. This section I found really interesting as well. The majority of the exhibits in this section I could personally relate to. Although the exhibition was dated from 1900 to the present day, I felt like I knew most of the exhibits on show. This section really made me think about how much of Scottish History I have been a part of, from the best parts such as Glasgow 2014 to the worst drop in oil Aberdeen has ever seen, to exciting changes in history such as the voting aged being dropped for the Scottish Referendum to 16 years old. 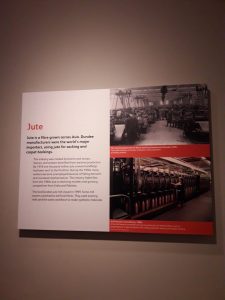 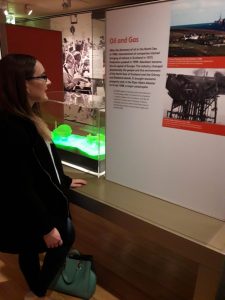 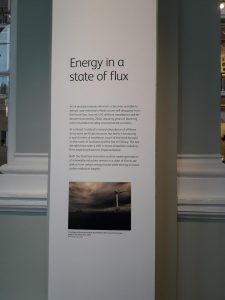 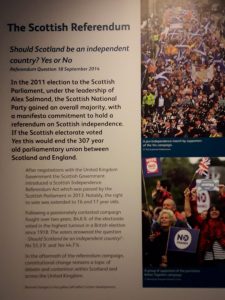 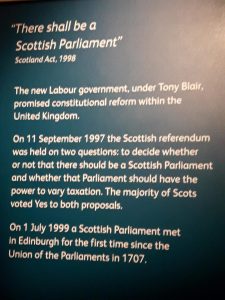 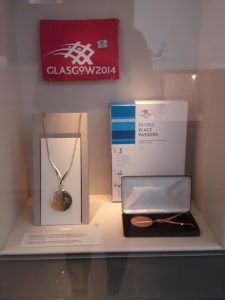 A Changing Nation, I felt did really well at including the whole of Scotland in the exhibit which isn’t always the case in other museums, they tend to be focussed a particularly era or part of Scotland. In this section, Katie learnt I wasn’t lying when I asked Foos your doos? or fit like I’day? And told her these were real words when she watched a video from the people of Scotland. Both of us, were very fond of this video, it really encapsulated Scotland and our heritage. This section took us from more recent history straight through to the modern day. It helped me personally to understand where we had come from in perspective to where we are currently and how we as a nation have evolved over time. I feel to fully understand where we are, we must understand our heritage which in my own opinion is key in the rationale for teaching history.

As we ventured down the stairs into Industry and Empire, the 19th century section, we began to quickly get bored.

Whilst in the Industry and Empire section and even further down the Scottish history timeline and sections, although we did still feel there was a lot of information to take in and we did not see the significance to our lives as learners and questioned the relevance to children in our potential classes. We felt if we ourselves as learners were bored, we would struggle to engage children in a lesson in this section. Therefore, personally, if I were to take a class, unless it was specific to the topic they were learning about at the time, I would perhaps limit the Scotland section to only Scotland: A Changing Nation and the more modern history which children could relate to.

As I stated at the beginning, there were a variety of different sections and we unfortunately did not get to visit them all. However, we did have a quick look at the Art, Design and Fashion section. Katie had a class who were designing hats as part of a project with the V&A Dundee in her placement school last year and she felt they would have thoroughly enjoyed looking at the exhibits in this section. Katie felt this would have inspired their designs and inspired the children to be as creative as they liked with their hats. On the other hand, to myself, I wouldn’t have thought to take a class to this section as a teacher as although I thought the dresses and hats were pretty to look at, I did not feel myself gaining anything as a learner. Therefore, it shows, given the right topic this could be a great stimulus for learning and thus we must remain open minded to different sections of the museums for different topics and not just continue to use the same section or exhibits.

We also had brief look at the Age of Oil special exhibit. The Age of Oil exhibit was looking at the Oil industry mainly with the focus on Aberdeen. The Oil industry is a significant part of my life. I grew up spending my weekends playing at the Harbour with my grandparents. Both my dad, sister and at least one of my best friends, Findlay, currently work in the oil industry. It is hugely significant in Aberdeen. It is a big employer and has many jobs, to the point my dad, sister and Findlay all work in oil but neither work in the same company and neither of them even have similar jobs. However, neither of them work off shore either. Baring this in mind, here are my thoughts of the exhibit.

So far, I feel I enjoyed this trip the most out of all of the previous trips. There is so much that can be done in the museum and we couldn’t have possibly looked in depth at everything in the short amount of time we went so we did focus on Technology and Science and Scotland: A Changing Nation. We chose to do that as we felt those sections were most relevant to ourselves as learners and felt they would be most relevant to the children in our future classes.

Overall, here are our thoughts from the trip:

It was a very educational but fun day out! I had a great time embracing my inner child. Definitely recommend a visit! 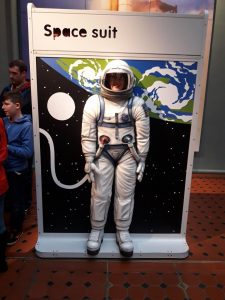 We have finally been given our third year placement schools. After having a fantastic last day at Claypotts Castle nursery, getting my third year school and nursery was a great excitement to be able to know I am going back into school so soon.

This excitement may have taken over a little bit as my desire to go and see the school quickly overcame my lack of motivation to proof read my assignment for the hundredth time. Before I knew it, I was in my car and off on a road trip to go and have a look at the area. I have driven past the signs on the dual carriage way for Kirriemuir countless times however I have never went in past and I knew nothing about the area. I knew that this was an area I need to develop my knowledge on for my placement folder. Therefore, I thought having a drive could do no harm.

I had a bit of a look around Kirriemuir itself. The setting is surrounded by the Angus Glen’s and one of the Cairngorm Mountain ranges. Kirriemuir is an absolutely gorgeous place and I can only hope that my school takes full potential of the setting they are in to develop their outdoor learning.

Just by chance on the way back to Dundee we drove through Kirriemuir town centre and there was a little Tourist Information centre which I thought may have some leaflets or information for me to further develop my knowledge of the town. The two ladies who worked in their could not have been more helpful, they allowed me to look around, take a selection of leaflets about Kirriemuir and Angus in general (as although I drive through it a lot, I did not know a lot about Angus either), and the ladies let me know that the are very accommodating to have classes come to the Tourist Information as they have a lot of resources to help. They were very excited that I had a primary 1 class as they do not often get ‘the little ones’ in to visit and it is normally just primary fours or primary sevens. This is something that I will be well aware of when I am on placement and if the children are learning about something relevant to the town that could spark a trip to the tourist centre then it would definitely be something I would suggest to the class teacher.