As part of our TDT from Nikki following our social studies workshop: Katie and I decided to take a trip to the McManus Gallery – a place we have been curious about since moving to Dundee 2 years ago. 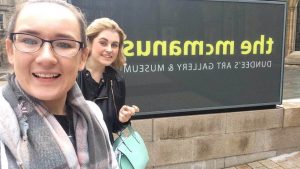 “I am aware that different types of evidence can help me to find out about the past. SOC 0-01a”;

“I can use evidence to recreate the story of a place or individual of local historical interest. SOC 1-03a”;

“I can compare aspects of people’s daily lives in the past with my own by using historical evidence or the experience of recreating an historical setting. SOC 1-0”;

And finally, “I can investigate a Scottish historical theme to discover how past events or the actions of individuals or groups have shaped Scottish society. SOC 2-03a”.

When we went into the McManus, we realised that there was a very wide variety of resources, information and materials. This made it difficult for us to pin point one topic that you could be focussing on if you were going to be taking a class on a trip. There was multiple suggestions that Katie and myself went back and forth contemplating such as a topic on: the 3 J’s of Dundee: Jute, Jam and Journalism; the Tay Bridge Disaster; Dundee city centre through time, travel throughout time. Although there were resources on all of these topics; there was only one small section on each of these which meant that if you were to take a class based on any of these topics then it would be difficult to fill a morning or afternoon using the gallery alone as a lesson.

However, if the class were doing a topic just on Dundee: Past, Present and Future. I thought that maybe having the class spilt into different groups for working in the gallery and outside the gallery.

For the city square group: I would begin with them standing o 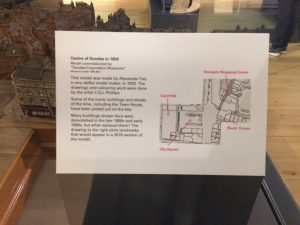 n city square reflecting on what they can see, hear, feel around them. I would then take them into the section of the McManus Gallery titled “What is a Museum?” and have them discuss in their group what they believed they would be able to find in the McManus on their topic. I would then take them into the Modern Making of Dundee section of the gallery; allowing them some time to look around before directing them to the model of the city centre from the past before getting them to imagine and discuss what they think they would hear, feel and see around them if they were to stand in the city square at this time. I would take this group into the study section to discuss what they think the future of the city centre of Dundee will be like, looking at the development of the waterfront and the Wellgate shopping centre. I feel like this is relevant to their lives as it is looking at Dundee as a progressive 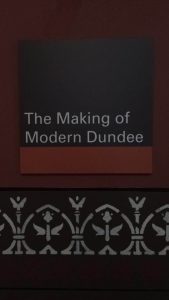 city and it is looking into what their future will look like in Dundee. I would also have the group discussing what they would want for the future city, if they would like to stay in the city in the future. 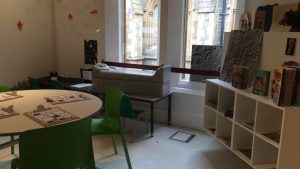 For group two who would be looking at the 3 J’s, I would start with them in the section What is a 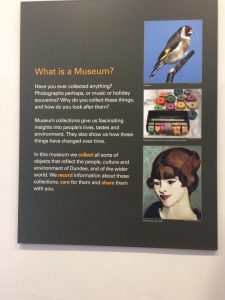 Museum? and have them discuss what they think they should be looking for in the gallery. I would allow them time in the Modern Making of Dundee section to explore before directing them towards the 3 J’s exhibit and the Beano exhibit as this was a crucial part of journalism in Dundee. I would allow the group some time in the study section on the gallery to look into the Beano magazines and discuss what they have learnt from the exhibits on the 3J’s. I would get the group to discuss what they think will happen to journalism in the future thinking about technologies role in journalism. I would then get this group to finally go out and look at Bash Street just along from the museum, discussing its role in journalism in Dundee and look at the Beano statues in the city centre to bring the trip to an end – if there was time: I would get the group to sketch the statue or the Bash Street sign.

My third group I would start down at the River Tay. I would get them to look at the current bridge, draw a sketch of it and discuss why they thought we needed a new bridge. I would then get them to look at the signs around them and look into the history of the Tay Bridge: including the Tay Bridge Disaster, much like the English Outdoor Lesson (which you can find a post about here) section of the gallery, allowing free time to explore the exhibit before asking them what they have found that links to their topic. If they are struggling, I would direct them to the Tay Bridge disaster exhibit. Finally, I would get the group into the study section of the gallery and get them to share what they have learnt about the disaster and the current Tay Bridge and think what/if any predictions they have for the future of the Tay Bridge – linking in with technological advances in travel which they can also go and look at the past methods of transport and how they can imagine travelling over the Tay in the future. 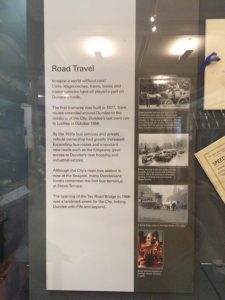 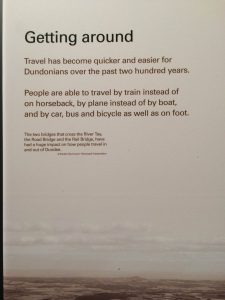 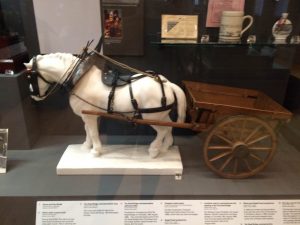 My final group that I will have looking mainly at the future of the Dundee Waterfront. I would have them start i 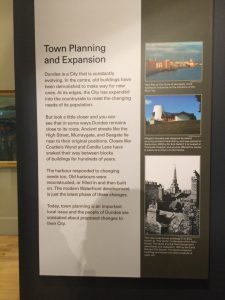 To conclude this trip: I would have each group create a presentation to feedback their knowledge and what they have learnt with the other children in the class. This presentation could take the form of powerpoint, art work, amongst other ideas. I would then link this into a technology input and have the children use google maps to find the places they have visited and create one whole class map conveying the past, current and future of Dundee: which I intend to blog about in a future post.

Overall, this trip would take a lot of planning and a serious amount of additional help from parents and other teachers. This would make the trip rather difficult to get around. The McManus Galleries although they have a huge range of fantastic exhibits that are very educational. There is not an in depth section on any particular part which would also make this trip rather difficult.

Personally, I at this stage in my development would not choose to take a class here. However, as I get more confident in my teaching and have a class of my own so I know the children – this is something I may consider as the class can learn a lot about Dundee from group work and there is a broad base of exhibit the children can use to expand there knowledge – more than likely more than there could ever be in a class or school.