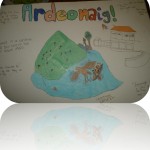 On Monday 27th September it was our class assembly.It was about the p7’s visit to Ardeonaig and Activity Week that took place in school. At Ardeonaig there were 4 groups-Lochy,Ness,Morlich and Tay. At Ardeonaig the p7’s took part in Gorge walking, high ropes, low ropes, an adventure walk, orienteering, archery and a treasure hunt. Every night the p7’s watched a bit of Marley And Me before they went to bed.They also had to say grace before every meal because Ardeonaig is a Christian centre. Every morning we were wakened by this song jitterbug coming throught the speakers!

The rest of the class enjoyed Activity Week in school.We visited Rosemount Farm in Blairgowrie which is owned by the Cooperative.We learnt about what crops they grew and we made healthy pizza’s.Here is a picture of one we made out of material. We went on Zooburst and Kerpoof. Another activity we did was drama. We went through the alphabet with a partner and guessed what they were acting out. We all had a great week no matter if we were at Ardeonaig or at school.