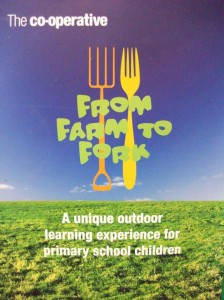 Wednesday. We went to From Farm to Fork. It is not a animal farm it is just a growing food farm. It was great fun,we got split into two groups, P7s and the other group was P6s. P7s first activity was making pizza. It was a vegetarian pizza. We first made the dough, then then you put the Tomato sauce over it. Then we put as much cheese over it as we wanted. Then we put the other ingredients like peppers, tomatoes, pineapple and sweetcorn. P6s first activity was going a small trip  around the farm. We saw where they plant the potatoes. They have wildlife space beside the potatoes. Did you know.  They are  Britain’s largest farmer so they have stores all over the country, so they  have a responsibility to the people who eat there  food :).  By that time we had to go back to get the others. By the time we got back it was time to swap over.At the end they gave us 2 books, one was all about where your food comes from. The other one was a a-z of food and farming facts. Looking forward to posting again. 😀