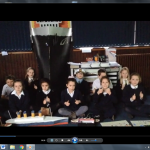 La Concours de la francophonie
Well done to the P5 class of Dunoon Primary School for winning the regional final of the French Drama competition. The class were involved in an interdisciplinary learning project about the Titanic. They then developed a French drama linked with this project and sang a traditional French song about a sailor and the sea. Their winning entry can be seen HERE . They have now been entered into the national final. We wish them every success in the next stage of the competition.