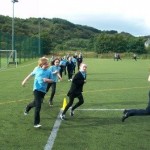 Pupils in Primary 7/6 at Tarbert Academy have taken up the Team GB challenge of running the distance to Rio de Janeiro (9450 km from Tarbert) before the Olympic Games there next summer. Running three mornings a week, counting distances run in PE lessons and they are nearly 5% of the way there! After four weeks of running pupils have noticed a definite improvement in their fitness and are enjoying running as a great start to their day. 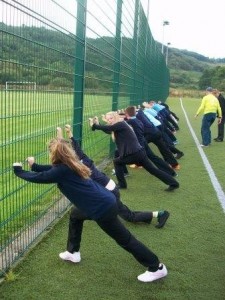 Frances Hardie, Active Schools Co-ordinator, is helping pupils to build up the distances run, with the aim of the whole class being able to run 10 minutes non-stop. Pupils have also learned some new running and stretching techniques from Chi running instructor Stuart Hardie.

The Junior Jog Scotland after school club also has a very healthy membership and distances run at the club are being added to the total. Next term P7/6 pupils plan to have a ‘sponsored run’ day, with pupils and staff paying for a time slot on the running machine to help boost total distance. Inspired by the Tarbert runners, pupils at Clachan Primary have also joined the challenge.


Pupils were also excited to learn that two former pupils, Feargus Mackaveney and Kieran Reppke, are working as engineers on a survey ship which has just made the crossing from the UK to Rio de Janeiro. Pupils have emailed Feargus and Kieran and are looking forward to hearing all about their journey across the Atlantic.